The Northwest Passage, spanning 3,000km from Pond Inlet, Nunavut, to Inuvik in the Northwest Territories, was daunting enough when Roald Amundsen became the first person to unlock its secrets back in 1906.

Over a century later, a team of ten women will do it a new way — swimming with snorkels. Named the after the Inuit goddess of the sea, the Sedna Expedition will seek to expand our knowledge of what lies beneath the often sub-zero waters, while reaching out to local Inuit and Inuvialuit women and girls, empowering them to build resilient communities to battle climate change.

While the swim won't take place until 2016 (route map, top right) this coming summer will see an exploratory mission as Team Sedna boards a 116 expeditionary trawler for a 15-day trip (route map top left). They'll connect with local communities, build team cohesion, test their gear, and prove they can manage the distance. Suunto ambassador Jill Heinerth gives us the lowdown.

Snorkeling across the Arctic? Sounds like a crazy plan!
The concept for the expedition was the dream of Susan R. Eaton, a Canadian earth scientist and journalist with a passion for educational awareness of global climate change and a deep connection with the indigenous people of the North. Three years ago, after witnessing another sailboat navigate the Northwest Passage Susan had a 'Eureka!' moment: Wouldn’t it be remarkable to swim the Northwest Passage? 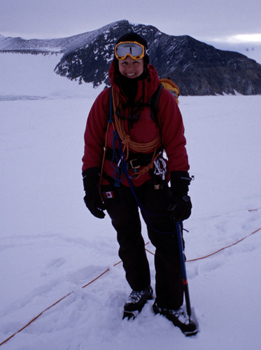 Why snorkel?
Snorkeling (as opposed to SCUBA diving) gives a swimmer a completely different viewpoint. The loss of sea ice is transforming the Arctic rapidly. We’ll be working in the transition zone between the earth, air, water and ice. Everything is the Arctic is driven by what happens in this snorkel zone. It’s the wheat fields of the North, where feeding, mating, predation and migration all take place.

What's the plan?
We definitely have to do shifts to make the distance. Assuming success during the proof-of-concept expedition, we'll start our epic three-month journey in the summer of 2016. We’ll follow in the esteemed footsteps of European and Canadian explorers, many of whom perished during their attempts to cross the treacherous Northwest Passage.

How many people will take part?
We have a team of ten remarkable women, aged 26 to 56, taking part in the project supported by a mother ship equipped with two rigid hull boats. The women hail from Canada, the United States, Mexico and New Zealand. Many are world-class technical divers and underwater scientists.

What's your personal motivation?
To bring science and conservation messages to people in a fun and exciting way. Last summer, I rode my bicycle across Canada, some 7,000 kilometers, and had a remarkable opportunity to connect with citizens of all backgrounds, while sharing a project called “We Are Water.” When people are inspired, it opens up a dialogue that can be life changing for all.

How cold will the water be?
The water will be as cold as it can get — minus 2 Celsius. We will need to be in the water many times a day and standing watch, completing science missions, making outreach journeys to Inuit communities and filming the entire mission. It is a lot of work for a small group. I think we’ll crash hard at the end of each day!

You'll have some help with propulsion.
Diver Propulsion Vehicles (DPVs) are also known as “scooters.” A diver or snorkeler can clip herself behind this torpedo-like device and use the motor to help propel her through the water at a faster speed than swimmers could otherwise achieve. This will help us cover ground, battle currents, and get to safety quickly if we encounter a polar bear or other animal that could harm us in the water.

Stay tuned for more updates on the Sedna Epic Expedition. For more diving adventures, check out our Facebook fanpage.