FREE SHIPPING OVER Kr. 750 | WINTER SALES | SIGN UP FOR NEWSLETTER

Who climbs the most? Suunto World Vertical Week 2018 big data is here

Who climbs the most? Suunto World Vertical Week 2018 big data is here

The third annual Suunto World Vertical Week is over and the results didn’t reveal big surprises: the same nation still leads the country ranking and the same activity still has the highest average ascent. However, there were some interesting surprises in the activity details!

WHICH COUNTRY CLIMBS THE MOST? 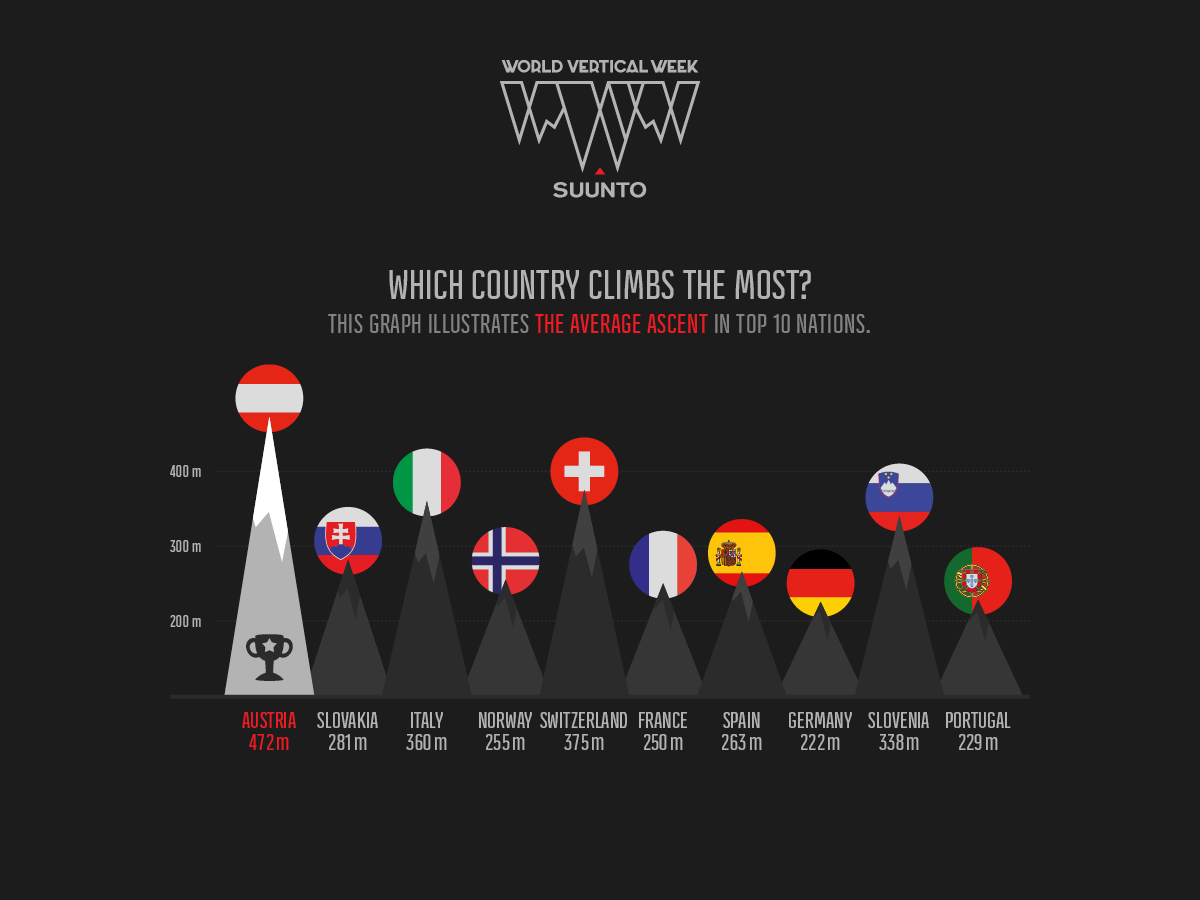 No big surprises here. The Austrians took the top spot again by a clear margin: on average they climbed almost a hundred meters higher than any other nation. Congratulations!

Also Switzerland was once again very strong: they have placed in the top three in the World Vertical Week ranking every year.

Overall the top four was dominated by people living in countries with the Alps. The popularity of ski touring, once again the activity with the most average ascent, surely contributes to these countries’ ranking.

Which country climbs the most? (average ascent per activity, top 20 countries)

BUT WHAT ABOUT THE DIFFERENT ACTIVITIES? WHO CLIMBS THE MOST?

We tracked all human-powered outdoor sports and looked at eight of them more closely: running, trail running, trekking, mountaineering, cycling, mountain biking, ski touring and cross-country skiing. A special shout-out goes to Japan and Italy: they both were on top in two different activity rankings. Italy even managed to get six top fives out of eight possible ones. 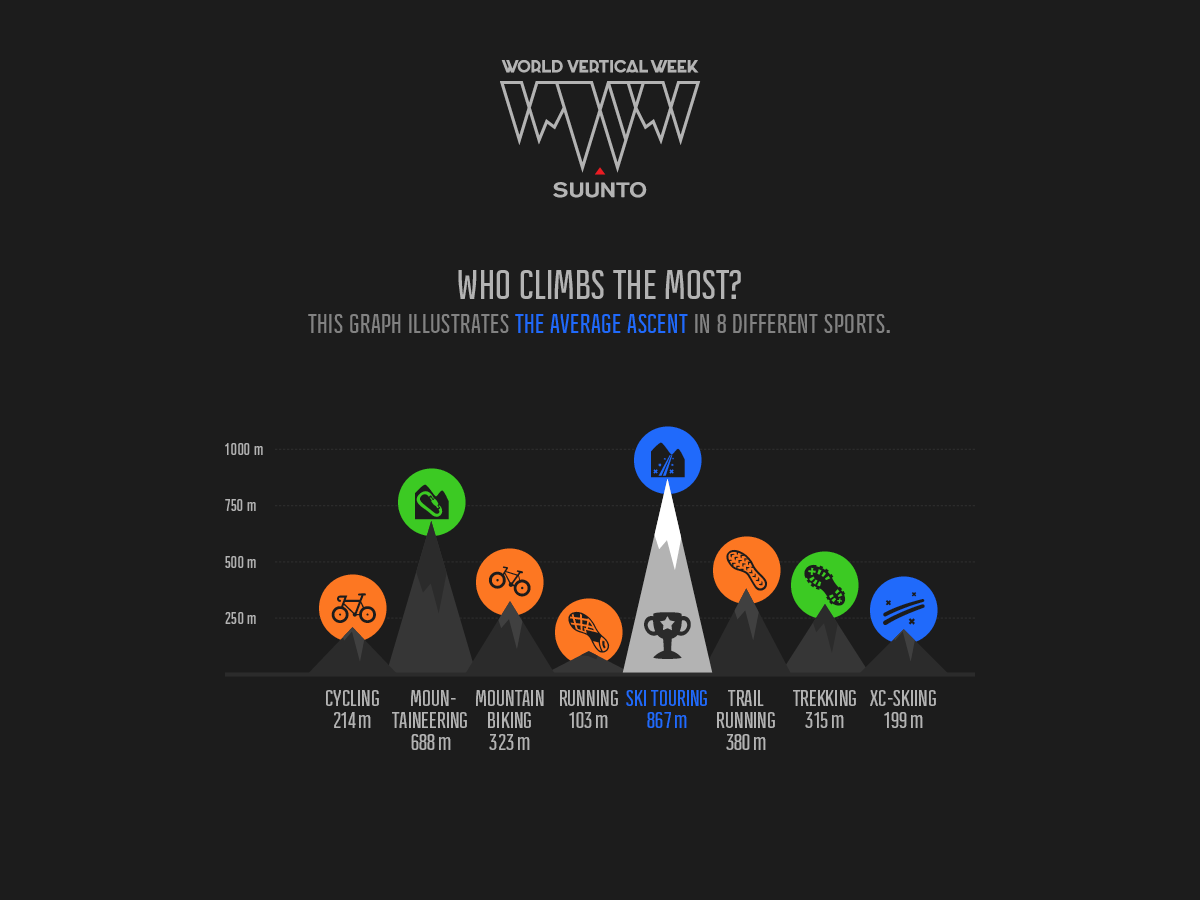 Skiers climbed away from the others also this year with the highest average ascent per activity (867 m). Also the number two, mountaineering with 688 m on average, kept its spot. Trail running (380 m) defended its third spot even though the trail runners didn’t reach the 400-meter mark this year.

To keep the playing field level, we were only comparing averages. A cumulative number of ascent meters per country or activity would not have made sense as the population and number of Suunto Movescount members varies from nation to nation.

YOU DON’T NEED MOUNTAINS AT HOME TO ENJOY BIG ASCENTS

The biggest surprise this year was the winner in ski touring category: the skiers from the Netherlands toured the biggest average ascents! It seems you don’t need mountains to enjoy big ascents. The highest point of their country rises only to 322 meters.

However, it is hard to believe that the Dutch would have collected all that vert back at home. One explanation for their success is that they didn’t actually tour at home, but had mostly traveled on a holiday to bigger hills and had had time to really record some vert. The same must be partly true to Great Britain that took the second spot in the ski touring ranking.

Countries like Switzerland, Austria, Italy and France had tens of times more ski touring activities during the week than the Dutch or the Brits but their averages were still lower. It seems that it is hard to beat someone enjoying a holiday even if you have mountains in your backyard. More dawn patrols and headlamp tours will be needed for the locals if they wish to beat their guests next year!

This analysis is not meant to take anything away from the Dutch and the Brits. There seems to be an active ski touring community in both countries that know that you need to go out during the World Vertical Week! Good job!

JAPANESE ON TOP IN MOUNTAINEERING

Japanese mountaineers recorded the highest average ascents during the week-long event. They added about 150 meters to their last year’s average and went from fifth to first. Well done!

It has been clear every year that Asia is strong in trail running and the same trend continues also this time around: The crown for the most average trail running ascent goes to Japan! That’s a strong performance considering the Japanese were number one also in mountaineering. Top spots in mountaineering and trail running, activities with the second and the third biggest average ascents, is an excellent demonstration that the Japanese are really strong in the uphill.

Winter in the mountainous regions in Europe and North America may limit the trail running ascents but never the less the Japanese and Chinese runners were very strong.