It’s been a busy summer for the Badewanne diving team. The Finnish group of underwater explorers have dived a number of deep wrecks in the Gulf of Finland from the first and second world wars and also discovered an unnamed wreck from the 19th century. In this team report they give the lowdown on their finds so far:

Operating from the Estonian and Finnish side, we have made dives during which history has again revealed itself before our eyes.

Near Osmussaar Island, Estonia we visited the wreck of Russian mineship Yenisei, another victim of victorious U26 from summer of 1915. The mighty ironclad rests on the seabed at 45 m listing to port, with the Obuhov cannons in their casemate stations defiantly pointing towards the green light above. 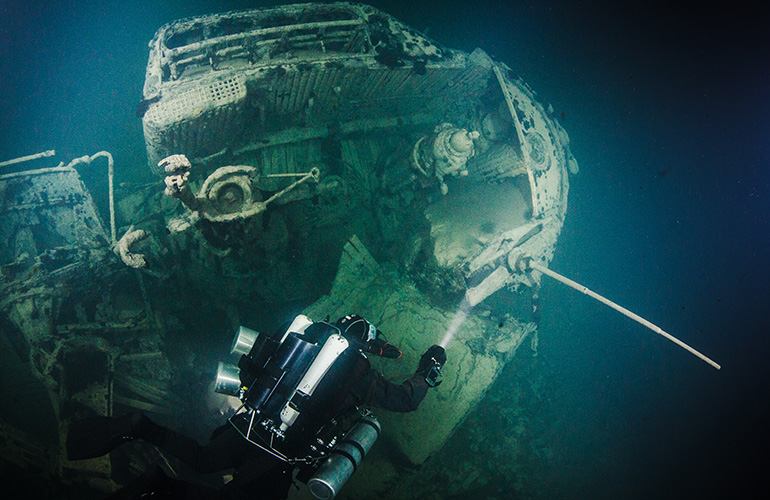 Next we headed out further into central Gulf of Finland and revisited the wreck of WW2 era wreck U 479. She rests on the seabed at 95 m after hitting a mine in the late fall of 1944. Dropping down through the water, we can see that the water is very layered, and eventually pass through the halocline at 75 m. There is a distinct boundary layer where water is optically distorted as we enter the more saline deepwater. Visibility at the wreck is good, and we utilize our short bottom time to shoot video of this uniquely well preserved WW2 U-boat wreck.

Continuing our journey through time, we dived another deep wreck, a WW2 “Torpedoboot” T18. It wasn’t a small “motor torpedo boat”, as many would think about, but in German classification it’s a 900 ton small destroyer of “Torpedoboot 37” class. The wreck is broken in the middle, laying at almost 100 m. Visibility is very good, and we obtain a good series of still images be
fore undertaking the ascent, and the subsequent and inevitable almost three hours of decompression. 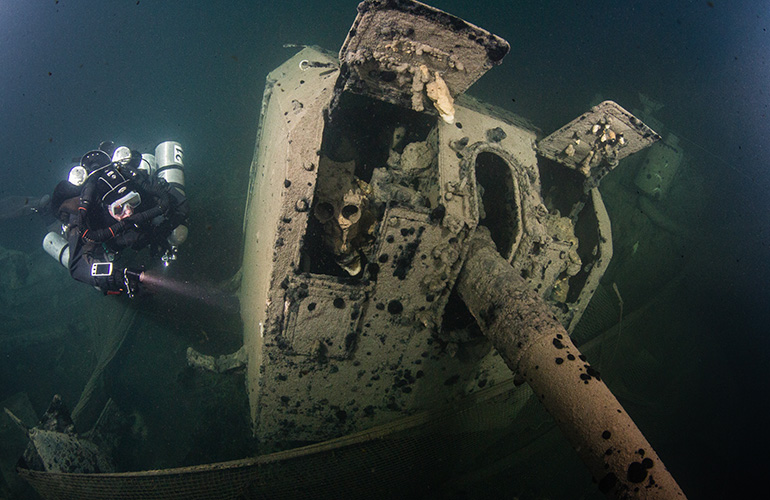 Next we move back to Finnish side, and establish our base on Hanko peninsula at Tvärminne Zoological Station, a scientific facility operated by University of Helsinki. From Tvärminne we again head out to the mouth of Gulf of Finland. We visit the wreck of U26, vanquisher of Pallada and Yenisei before her own fate in the fall of 1915. This wreck is very tricky to dive as it’s in a very busy location on the westbound shipping lane. Cooperation with maritime traffic controllers, Helsinki Traffic and Tallin Traffic is essential for safe and successful diving. We shoot video and stills for our documentary purposes, before we leave the U26
to her rest, which has lasted for 100 years this year. 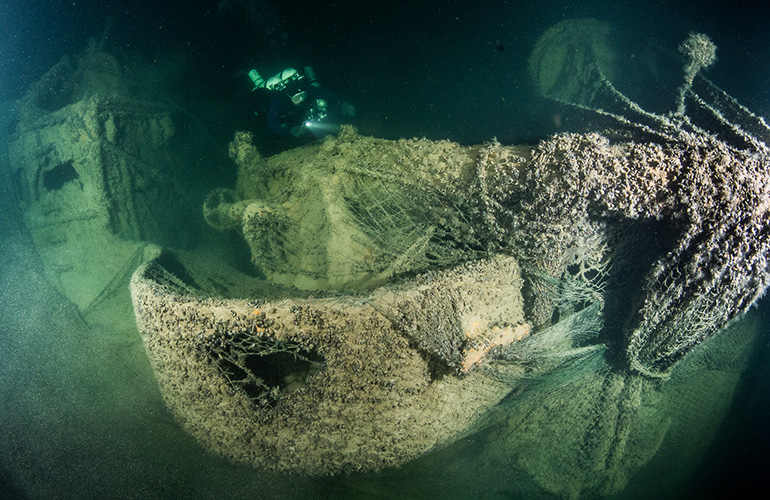 The wreck of the Yenisei, sunk by U26. ©badewanne.fi

Next target is something we don’t know – something that according to sonar images could be even a submarine. However, when we drop through 75 m of water, we arrive at a wreck of a mail ship from the 19thcentury. Her bows are buried in the glacial clay, and deck cabins have suffered from inevitable trawl damage, but it can be clearly seen that this ship has transported mail – and  people. Fancy cast-iron lattice in railings, beautifully crafted wooden benches can be seen on upper deck, together with the ships’ wheel still standing, and the engine telegram and compass bowl on the deck. The identity of the ship is yet unknown.

Further out, during a lucky weather break, we again drop down to wreck at 80 m looking for a real “motor torpedo boat”. This turned out to be German Kriegsmarine Schnellboot S106 from the WW2 era, as we hoped. She’s broken in two by a mine explosion, but in very good condition. This is another new discovery, which adds a significant piece into the puzzle of naval warfare in the Gulf of Finland during WW2. After shooting images we again undertake the long ascent towards the green light. 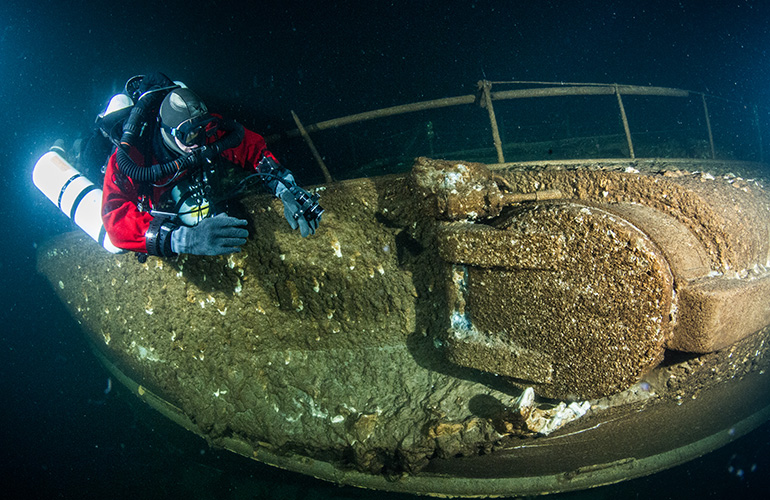 These are some impressions from our expedition this summer. However, there are still many weekends left of the diving season. Stay tuned, we may bring you more interesting stuff before the winter closes in!

For more info on the Badewanne team, head over to their website.