“Some people are repelled by the darkness of an underwater cave, but for me it’s an invitation into the unknown,” says Suunto Ambassador Jill Heinerth. Heinerth is a pioneering underwater explorer and filmmaker, leading technical diver, and world expert in rebreather technology.

Her love of the water began as a child and has persisted ever since. As a teen, Jill Heinerth was a volunteer swim instructor and lifeguard at her local swimming pool. Jacques Cousteau was her hero and by the age of 16 she was scuba diving.

Now, after more than a 20-year career, the Canadian underwater explorer and award-winning filmmaker has crossed the globe, diving in what she calls ‘the veins of mother earth’. Jill has dived deeper into the planet than any woman in history and seen some extraordinary places. She’s dived caves underneath the remote Ural mountains of Siberia, tickled the bellies of manatees near the Gulf of Mexico and explored sacred desert springs in Africa. In 2000, she was involved in one of her most ambitious projects to date — to dive inside a giant iceberg. In 2014 she was awarded the inaugural Sir Christopher Ondaatje Medal for Exploration by the Royal Canadian Geographical Society. 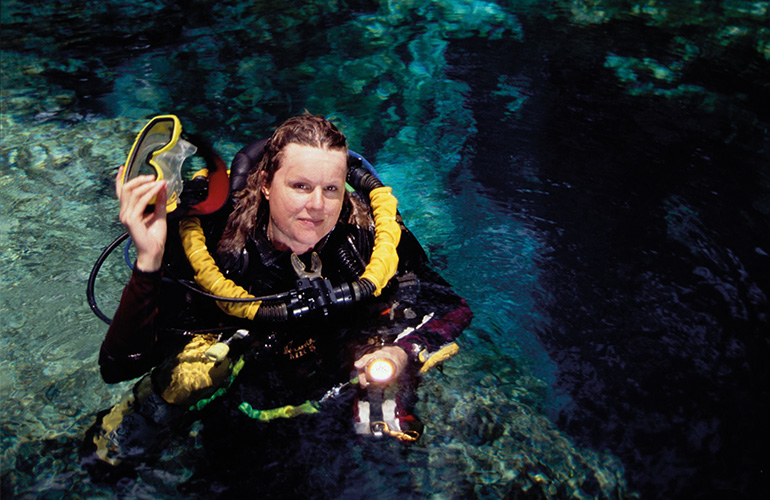 Jill is also a journalist and champion for women divers. She wrote a book called Women Underwater and in 2016 is part of a team of 10 women on an epic three-month journey, snorkeling more than 3000 km through frigid Arctic seas. “Some would suggest that exploration on this planet is done, but I disagree,” says Heinerth. “We know more about space than we do about our oceans and our underwater caves.”

Her abiding love of the ocean and watery places has also transformed her into a strong advocate for water conservation and protection, via her We Are Water Project. This important cause aims to raise awareness about global water issues, and encourage people to do more to protect our fresh water resources. Jill cycled across Canada, raising awareness along the way. With the same goal in mind, she wrote a fun children’s book about an itchy manatee that has an important message about water pollution.

Naturally, Suunto is the first choice of dive computer for Heinerth: “I’ve been using Suunto for a long time, and I think they represent the pinnacle of fine quality. The precise instruments and the ruggedness of the equipment have served me very well in some extreme diving expeditions over the years.”

She adds: “The Suunto DX is the key support device that serves as a backup for my rebreather. It’s easy to integrate it into a CCR dive plan, or any plan for that matter – open circuit or closed circuit. It also contains a very accurate digital compass, which I use to survey and make maps of new exploration.”