36 freedivers from 20 countries are preparing for Vertical Blue 2016, the elite freediving competition held at the world’s deepest blue hole in the Bahamas. It starts on April 22 and runs for 11 days. Get a view from the inside here. 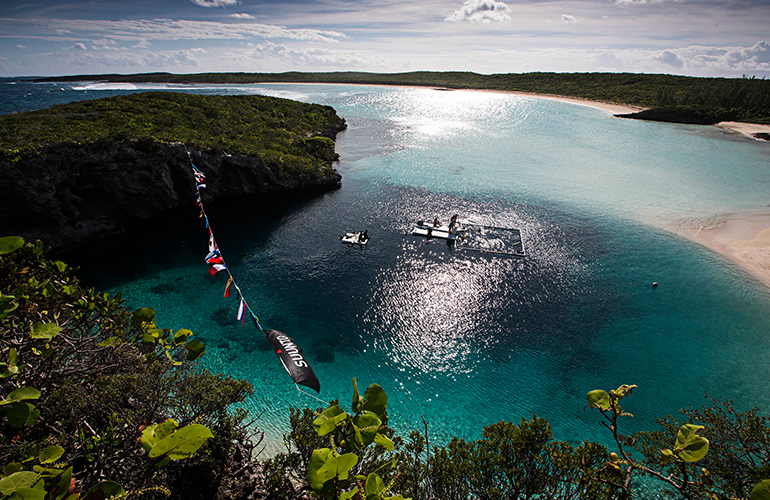 On the white sandy shores surrounding the deep, still waters of Dean’s Blue Hole waves of activity come and go.

Under the warm tropical sun, freedivers, competition judges, safety staff, photographers, media and organizers are preparing for Suunto Vertical Blue 2016, the most important depth diving competition of the year.

The athletes are putting the finishing touches on their training, or resting up and preparing their bodies with yoga and relaxation exercises. Diving down into the murky depths on a single breath requires total relaxation, which is more difficult to maintain under competition conditions.

Click here to learn about the different disciplines of competition freediving 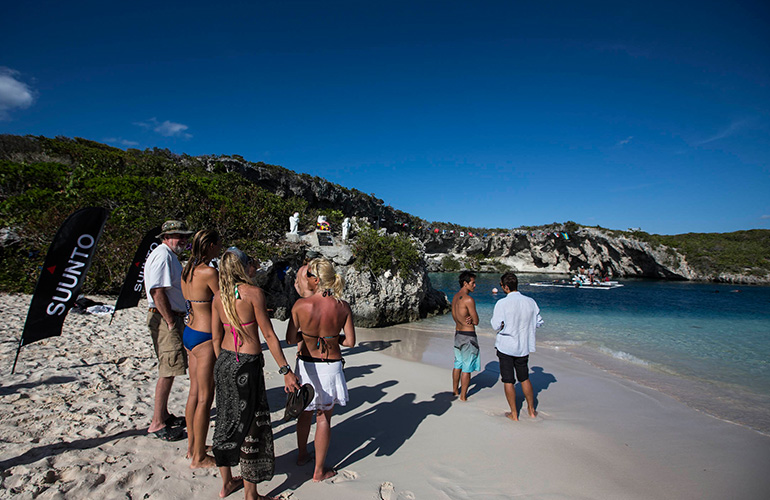 Spectators look on as the competition gets underway. © samovidic.com/ zooom.at

Safety staff are busy finalizing protocols. Organisers are testing underwater cameras, including a new underwater drone that will follow each diver down and back again – a world first for a freediving competition.

We caught up with some of the players to give you a sneak peak behind the scenes. 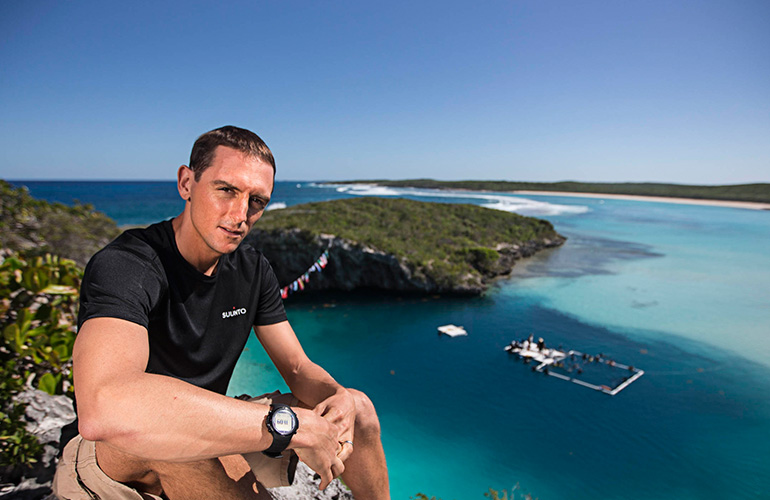 William is the first and only person to freedive to 101 m with no assistance. © samovidic.com/ zooom.at

“I've had a lot of recent injuries and sickness, so I am still not in top form,” he explains. “I'm treating this more as a warm-up competition for the season, but if I start doing good dives during the 11 days of the event then who knows?”

How deep do they dive? Click for a visual guide! 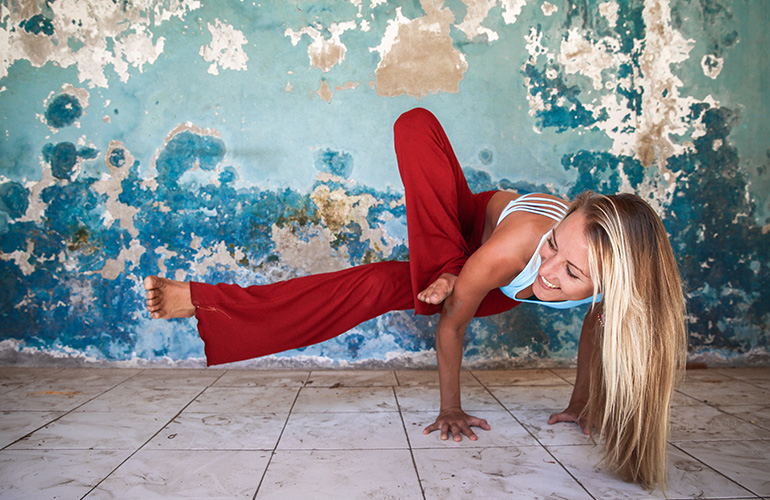 Kate runs a freediving and yoga school on an island near Bali. © katemiddletonyoga.com

Four weeks ago New Zealand record-holding freediver and yoga teacher Kate Middleton travelled from her tiny island home in Indonesia to tiny Long Island, the home of Dean’s Blue Hole, to focus on training for Vertical Blue 2016. The 27-year-old ocean lover is satisfied with her preparation.

“I’ve done all of the training that I can do beforehand,” she says. “Now I will benefit most from staying dry and resting up.”

For Kate, the competition is the pinnacle of the world’s freediving competitions. The professional organization, the robust safety system, the media attention and the level of competition make it special, she says. With no individual depth world championship in 2016, Vertical Blue is the most important competition of the year.

Read: The secret to freediving – relaxation. 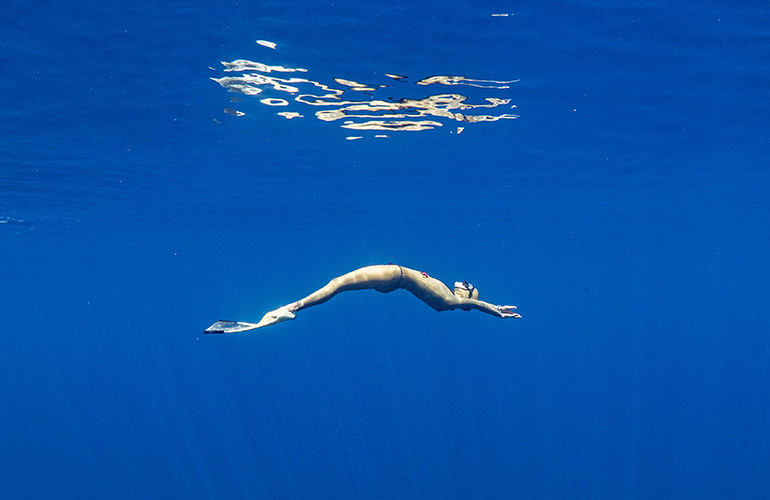 “All the activity is centred around the blue hole,” Kate says. “Pre- dive, most people are very quiet and focused. Post-dive everyone is really social and chatty. Everyone understands each other in that way. There's a lot of respect for where someone is at.”

Achieving her personal goals for the competition is one thing, but for Kate one of the main reasons she attends is for the community it offers.

“Freediving is a small sport so it’s rare that you're around so many people who have also devoted their life to this and to share something like that you really develop strong friendships quickly. Freediving brings everyone together.” 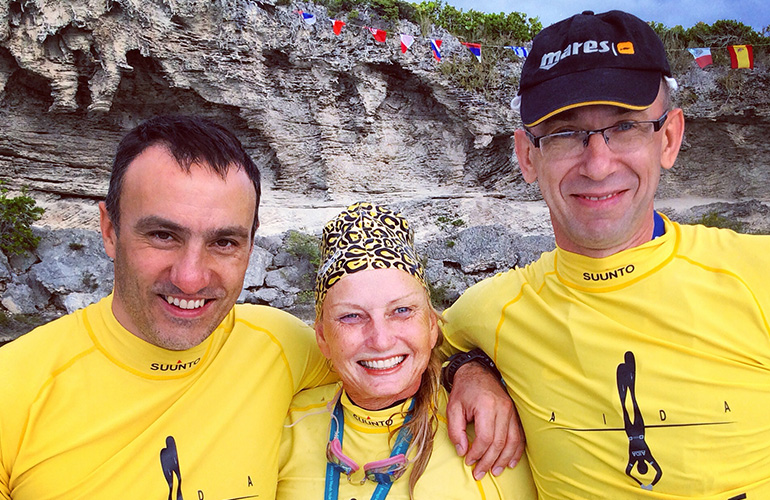 CarlaSue Hanson says its going to be a big 11 days. © Francesca Koe

President of AIDA International (Association for the Development of Apnea) CarlaSue Hanson is one of the judges at this year’s competition. To be a judge requires completing a specific AIDA course. Competition organizers pick judges according to their level of experience, something CarlaSue has in spades.

“The main responsibility of the judge is to ensure that all requirements of the rules of AIDA International are upheld,” she explains. “Safety is the main concern above all else.”

As AIDA president, CarlaSue knows many of the competitors.

“It does help to know the divers when tracking the results and also watching for any indications of stress or possible injury. I have a little record in my head about the past dives and it gives me some indication of what I might expect to see.” 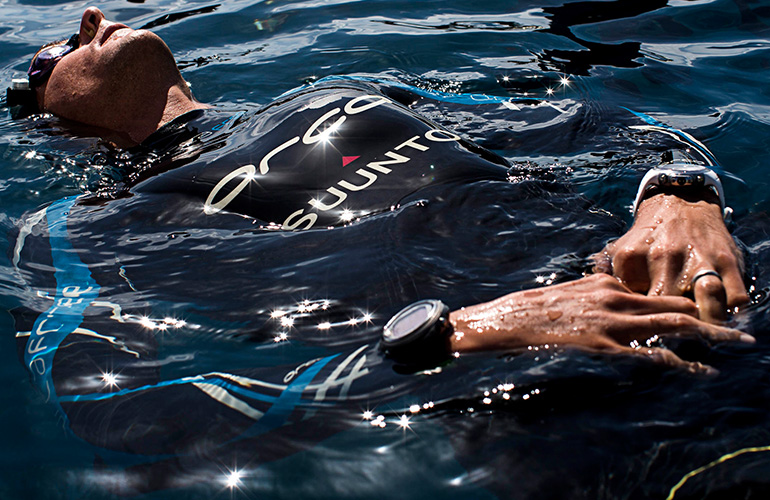 Like Kate, CarlaSue sees Vertical Blue as a prestigious event that attracts the world’s best freedivers.

“The unique setting and calm water of the lagoon provide for consistent conditions without excessive wind and current,” she says. “It’s also easier for all of us, as the competition site is so close to the shore so we don’t have to take a boat out to the venue.

“It is also one of the only competitions where we have spectators. The other athletes can watch their friends and rivals dive and we also have locals and tourists coming out to cheer and enjoy the competition.” 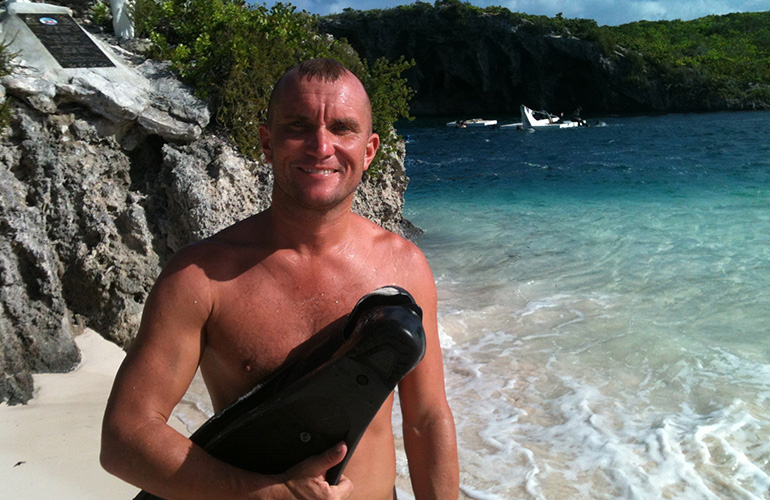 Competitive freediver and freediving instructor trainer Stephen Keenan is chief of safety this year. In previous years he has performed the role of platform coordinator so he knows well how to run a tight operation.

“My role is crucial to keep things running smoothly and to create a comfortable environment for the athletes to do their best,” he says.

CarlaSue knows who’s who in the freediving world. She says there’s a lot of talent at this year’s event that she expects to do well.

“She won the overall women's gold medal at Vertical Blue 2015 and was also CNF gold medallist at the AIDA World Championship.”

In 2014, Marianna was the world's number one ranked female freediver. Last year she became the Russian national depth champion.

Johnny won bronze at the AIDA World Depth Championship in 2013. He served as chief of safety at Vertical Blue 2014.

“We have some other athletes that are big names in freediving but are new to Vertical Blue: Aolin Wang and Jessea Lu of China, Italian Homar Leuci, Camilla Jaber from Mexico, Stephane Tourreau from France, American Ashleigh Baird and a local Bahamian Luke Maillis.”

Click here to read about last year's results and here to see this year's athletes.