A drunken bet, a spin of a globe, next minute three friends find themselves in Tajikistan running 400 km in the middle of nowhere. 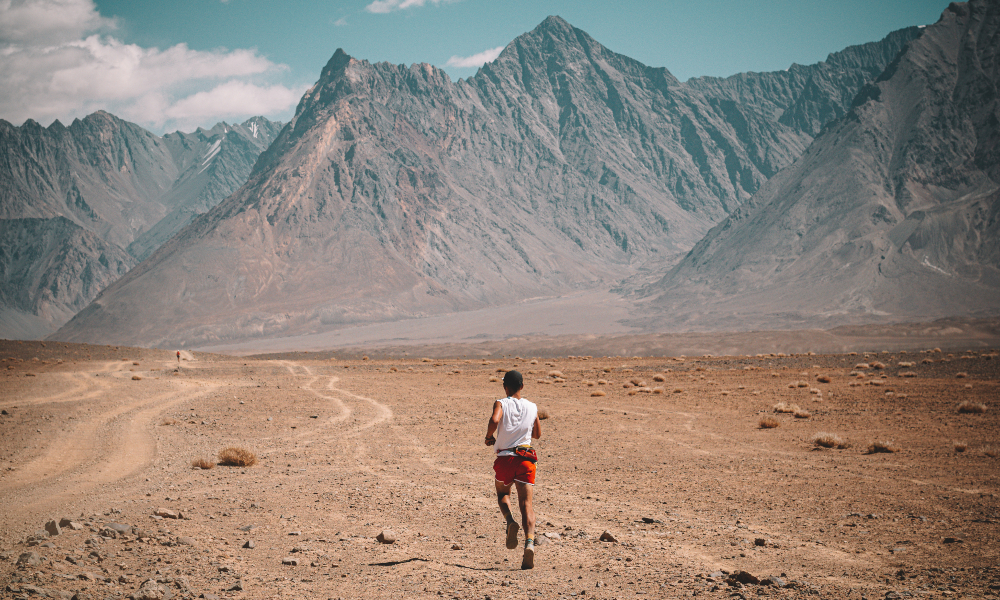 Gabe found his ultra legs deep into the adventure.

It all started at a party when buddies Jody Bragger and Gabriel (Gabe) Ghiglione – both bored of their deskjobs and craving adventure – made a drunken bet; they’d spin a globe and wherever Gabe’s finger landed they’d go and run there. It landed on Tajikistan.

Neither of them had the faintest idea about the landlocked Central Asian country with a population of 9.5 million or of its history as part of the ancient Silk Road. Neither of them had any idea what they were getting themselves into. So they roped ultra runner Jodie Gauld into joining them, and hopped on a plane.

The Running the Roof feature film, made by film company Sourcy and sponsored by Suunto, is about the trio’s journey running 400 km, the equivalent of about 10 marathons, through eastern Tajikistan’s remote and desolate Bartang Valley. They faced intense heat and cold, 4500 m altitude, dust, Gabe’s constant antics, their own minds, and a lot of unknowns.

We caught up with Jody Bragger to talk about the adventure. Read on for our Q&A and watch the trailer below.

The virtual edition of the Banff Film Festival will show the film on 31 October 2020.

How does it feel having the film selected by Banff?

We never went into this pretending we were anything other than just three mates who like running. The premise of this whole expedition was to go and have a great time. When we told our friends about it they wanted to make a film about it, but we never went in with this idea of creating another big adventure film with super, deep meaning. We went away to have a really good time, to have a laugh, and see what we can do. There was no pressure to scale this mountain, or be the first or the fatest or reach some arbitrary goal. It was just about being there together as friends and exploring this beautiful, remote and wild place.

What were the most epic runs that each of you had done?

Jodie Gauld and I both come from the ultra running discipline. Jody has run TDS at UTMB, I’ve done CCC at UTMB. Jody has run 25 ultras, she’s done 100 milers, some tough races. I’ve run a few of the big races, like Ultra Trail Cape Town. We were both aware of the pitfalls of ultra running and knew what to expect.

Gabriel really was the archetypal North American university track athlete. He only started running distances further than 10 km in the last couple of years. He’s definitely a super strong, fit and fast runner. But he only ever ran one marathon previous to this and that was the Barcelona marathon and he had left a nightclub at 4am on the day. He really is someone who loves running, but never takes it too seriously. 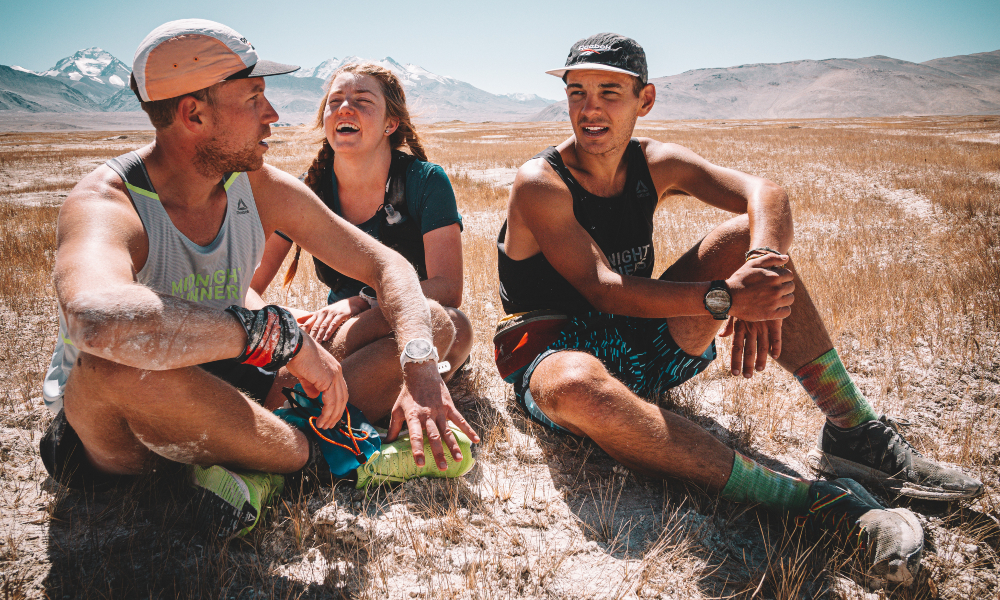 Jody (left), Jodie and Gabe all faced adversity on the adventure.

What was the hardest part of the run?

It was definitely the elements, the valley itself, and an unknown aspect that played in the back of our minds. None of us had ever run at 4500 m altitude. The psychological aspect was a big factor. We didn’t know what it was going to be like running at elevation, we didn’t know how the film crew was going to work, we didn’t even know where we were going to stay. Running is all about mind over matter and really believing that you can push on when you feel like you can’t. The heat and the cold, the elevation, the dust, the unknown – that’s what we were up against.

What was the elevation gain?

In total it was somewhere around 5000 m, over 400 km distance. We started at 2500 m and the highest pass was around 4700 m. We were running consistently above what some people call the danger zone where you’re likely to get altitude sickness. The altitude not only affected our running, but also our sleep, eating, and hydration. 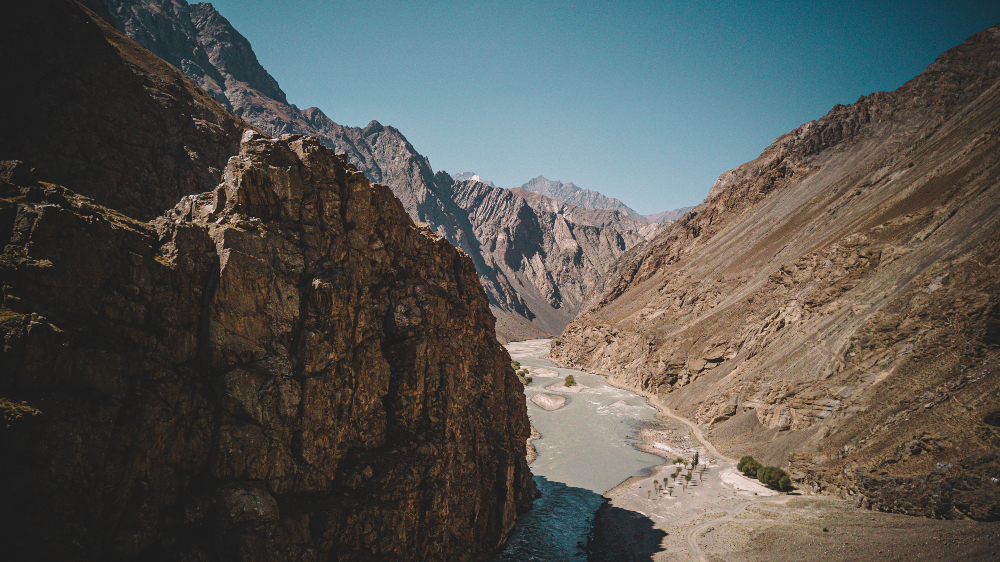 The Bartang Valley is located in the Pamir mountain range, the setting of the Great Game in the 19th century.

Did you train for the altitude?

We didn’t do any specific altitude training. Me and Jodie both ran TDS and CCC at UTMB around a month before we went. That was our way of training for the expedition. I remember on the first day there when we set off running thinking, “well, at least we can run, at least it’s working”. It sounds crazy, but when you’re planning something for so long, when there are so many unknowns, it’s the moment when you take the first step that you understand it’s really happening.

Were the local people there hospitable?

Yes. It was a lovely reminder of our shared humanity. We often go into these places as travelers feeling like we’re breaking new territory, but these places have a history for a millennia of hosting people on the move. Tajikistan and its culture has had people in transit ingrained into it. It was part of the route of the Silk Road. Hospitality for strangers just sort of shines through there. It really is the crossroads of the world. That culture of welcoming people in, allowing them to stay in your home, complete strangers who don't speak the language, and giving them a good meal and setting them off on the next day just seemed so natural. They also gave us so much knowledge about the route, the next village, where we could find lodgings, food and water.

How was the food?

I don’t think Tajikistan is known for its cuisine. But the food was always plentiful. It’s a place where resources are fairly scarce and completely based on self sustained agriculture. They grow what they eat, store what they don’t eat, and trade a little bit. Most places keep everything just for the community. They provided plentiful food for us.

The three friends never took the adventure too seriously.

What surprised you most there?

Probably the relationship people there have with nature. The valley is a microcosm of all the issues we face as a species. They really do live in equilibrium with the valley so it’s almost like you don’t want too many travellers there because then they’re going to have to push the limits of what the valley can support.

I spoke to one guy who told me he was really enjoying having tourists there because they pay in currency, which is something he hadn’t previously had much access to. He had a small self-sustaining farm and he occasionally traded with food at a market or occasionally sold a little bit for cash. Currency from tourists allowed him to buy some things for his family, like a mobile phone for communication.

He told me all the energy they get is from the forest, from the wood. He would chop down trees at a rate he knew was sustainable for the valley to replenish itself so the next year there would be enough wood. Even that little extra amount of tourists coming through required more wood. He noticed he was cutting more wood. He was interested in getting a small hydroelectric pump you can put on rivers to generate energy.

It was almost like going back in time and seeing how things were in many places not so long ago. It made me realise how unique that part of the world is. These sorts of wild, high mountain, desert areas are teetering on the edge of remaining that way or having to modernise.

Now that a year has passed since you finished it, what are your thoughts looking back?

As we all locked ourselves inside because of the pandemic, and as our horizons have closed and our expectations have shrunk, the film has come into its own, strangely. Our worlds have become smaller and often based around a laptop screen. The film is a nice reminder of the world we left behind. And maybe flying around the world and doing crazy things isn’t the most sustainable long term. But the film is a reminder of that freedom of being young, throwing some things into a bag, jumping on a bus, a train or a plane, and going out there and pushing yourself to your limit. I look back at that adventure with a heavy sense of nostalgia. I miss those days a bit.

I guess I want to say to people watching it that these kinds of things are possible. Neither Jodie, myself or Gabriel are pro athletes, we aren’t sponsored by anyone, we aren’t paid to do this, we haven’t got a brief from a firm to create content around. We are none of these things. We literally got drunk, spun a globe and decided to do this. It shows what’s possible. And running through a landscape is an amazing way to connect with people. When you’re on two feet, you feel more connected to nature, the flow of the river, the way the sun rises, the plants and animals, and the connection with humans is more real than travelling by car.

Running the Roof will be screened at this year’s virtual edition of the Banff Mountain Film Festival on 31 October, 2020 and available to download online.