Crossing the Arctic Circle – by snorkel

Crossing the Arctic Circle – by snorkel

Suunto ambassador Jill Heinerth has undertaken some extraordinary diving expeditions over the years, but none are quite so unique as the Sedna EPIC Expedition. In her own words below, she describes the team's bid to snorkel across the Arctic.

I had my eyes trained on my Suunto Ambit, watching for the approaching landmark. The latitude ticked slowly upwards as the excitement heightened to a fever pitch. The deck was a hive of activity with ten women, scrambling into their drysuits, preparing to leap into the water in unison and swim as a team over the precise location that marks the Arctic Circle. Merino long underwear, a heated vest, a Thinsulate undergarment and finally a cozy drysuit all layered up to protect us from the water that hovered around 2°C. 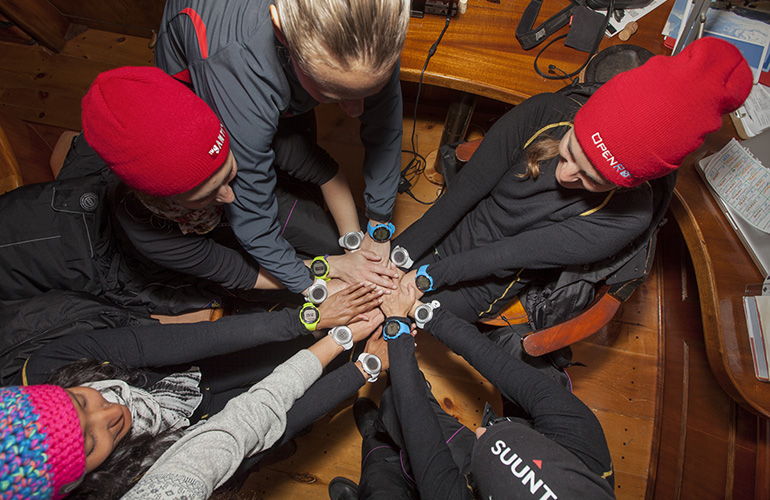 Each girl repositioned her Ambit and D4i diving computer on her wrist when suddenly, the positive energy took a startling turn. From above, on the bridge, a voice bellowed an angry retort, “Who’s in charge of this chaos?” he screamed. “I want to know who thinks they are in charge of this fiasco?”

The talking stopped instantly and we all craned our heads towards the two figures on the bridge that were backlit by the late night Arctic sun. Whatever they were angry about, it sounded serious. But as soon as we saw them, the deck erupted in laughter. The Captain was wearing a spaghetti strainer on his head. A blonde dish towel appeared like golden locks while he embraced the boat owner Milos, who was wearing a sheep skin vest, large pillow and some women’s clothing. They chanted a traditional welcome to seafarers crossing the Arctic Circe and then finished with, “Now get off my ship!”

Giddy with schoolgirl enthusiasm, we leapt into the water to herald this momentous part of our expedition. With my underwater camera, I captured the celebration, relief and excitement of reaching this far north. And you can see the route of the team here on Jill's Movescount page. The 2014 Sedna EPIC Expedition aimed to bring a remarkable team of women together to undertake a long range snorkel relay with a goal to raise awareness of global climate change, loss of sea ice — and the indomitable power of the human spirit.

Led by Expedition Founder, Susan R. Eaton, the ultimate goal of the Sedna EPIC Expedition is to snorkel the Northwest Passage. This year, teamwork, technology and outreach techniques were practiced for a longer project that is slated for 2016.

It was an honor to photograph and work with such a formidable team of women who will undoubtedly make their mark as environmental advocates, scientists and thought leaders.

Support the project and you could receive some great Suunto gear. Click here for more details.