There are some adventure sports that have only been around for a matter of years, sports like ice-climbing, kiteboarding. Then there are others that have existed for only hundreds of years, like skiing and running. But there's one sport that has been around since the dawn of time itself – freediving.

Humans have been holding their breath and diving in water for thousands of years – to fish, and more recently, to have fun and compete. In fact, humans are so uniquely adapted to going underwater it's possible to argue that we've freediving before we even became human.

What happens during a dive? Check the infographic below: 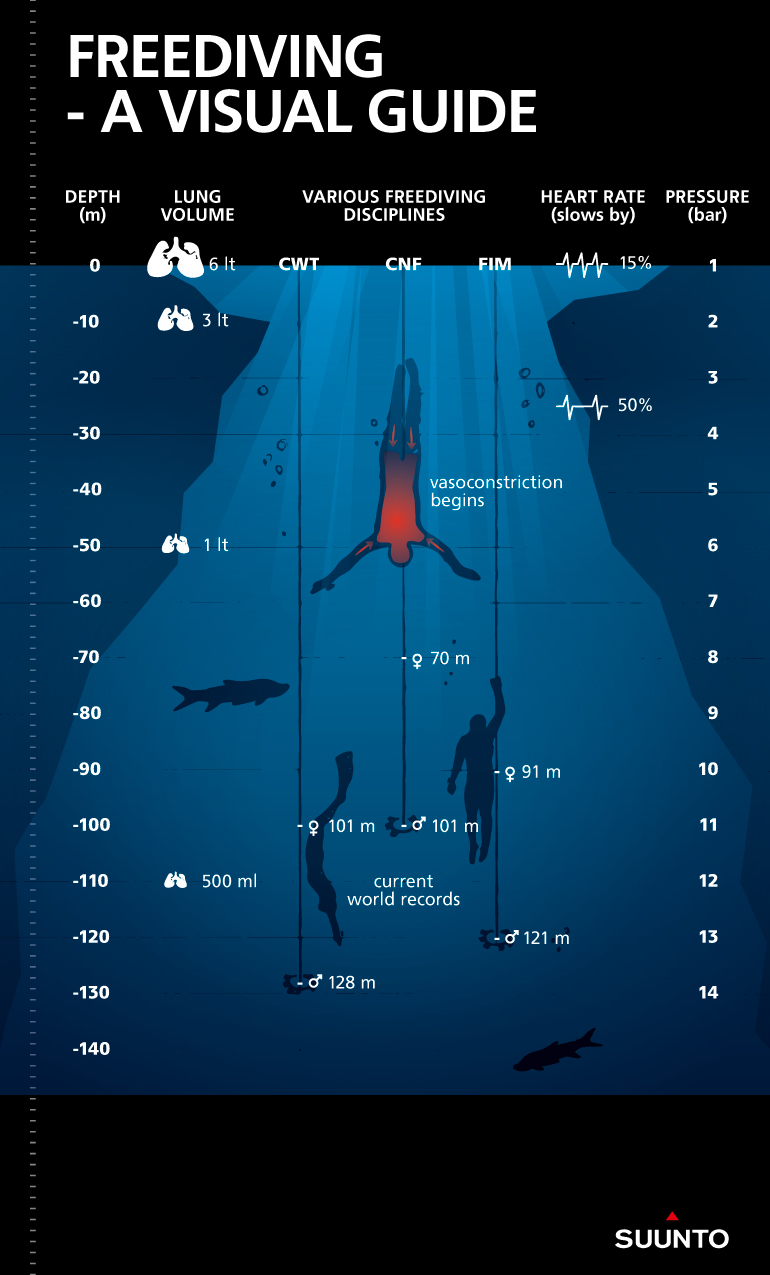 What are those special attributes that we share with other aquatic beings that make freediving possible? It all comes down to the so-called 'dive reflex'. The main feature of this is the slowing of the heart which automatically occurs once the face is submerged in water. This has the effect of reducing oxygen consumption so you can hold your breath for longer.

The dive reflex kicks in again after approximately 25 m: the heart rate slows by as much as 50% and vasoconstriction takes place. This is where warm blood retreats from the body's extremities to protect core organs. Again, this has the effect of lengthening the time we can spend underwater.

Will Trubridge competing at the 2014 Suunto Vertical Blue ©Daan Verhoeven

At this depth most divers can stop swimming – and just freefall to the depths below. It is this part of the dive that can induce the most pleasant feelings. Many freedivers feel euphoric as they enter an almost trance-like state.

Descent can be as fast as a meter a second so a world class freediver can expect to reach a depth of 100 m after approximately 1m 30s. At this depth lung volume will have shrunk from approximately 6 lt to 500 ml. The ascent is then the most psychologically challenging part of the dive as divers fight the urge to breathe. Stomach contractions kick in. Hallucinations are not uncommon. The most dangerous part of the dive is then the last 10 m to the surface – this is where the pressure difference is at its greatest and O2 supplies at their lowest – and divers are at risk of blacking out.

But it's not just about the depth. Competition diving and its many disciplines are only one aspect of the sport. For most freedivers, the sport is just about hanging out with friends and exploring the underwater world.