On the first ever Suunto Commuting Day the Suunto community traveled a distance that (almost) reached the moon and saved over 65.000 kg of CO2e.

To motivate people to ride and run to work and to slash their CO₂ emissions (CO2e), we invited our community to join the first ever Suunto Commuting Day on September 22. The response was great: the community tracked nearly 380.000 km of human-powered commutes with their Suunto watches and Hammerhead bike computers. That’s just about the same distance as going from Earth to the moon!

The most common commuting distance for cyclists was 8,4 km, for runners 6,1 km and walkers 2,9 km. When looked closer at the cycling distances the distribution is quite equal:

Time-wise, runners had the longest duration commutes. The most common commuting durations were:

When looking at different nations, the Swedes were the most active bike commuters as the ratio between their bike commutes and bike rides in general was the highest. Other countries on the active commuter list were Germany, France, Finland and the UK. 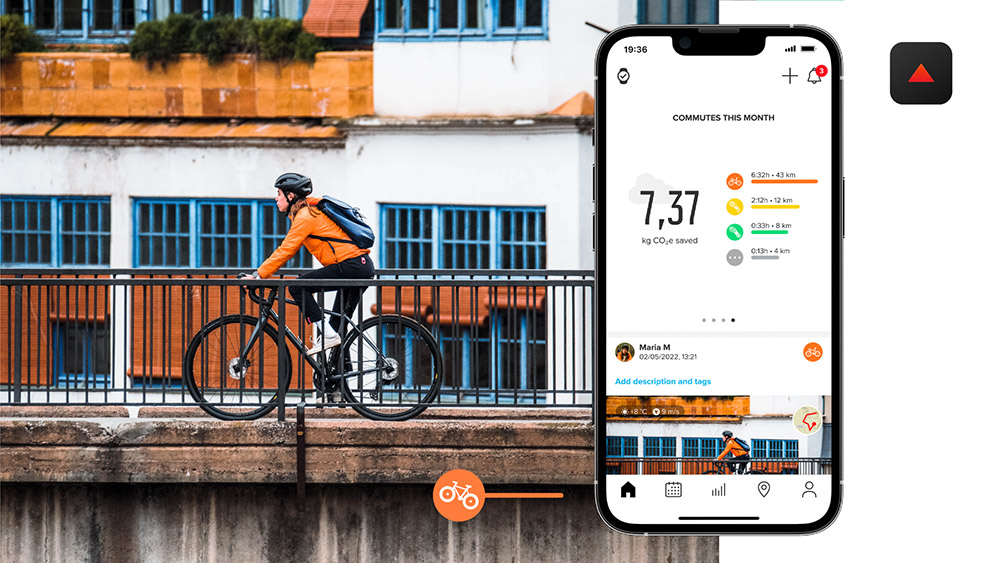 Human-powered commutes are good for both you and the planet as transportation is one of the biggest sources of emissions worldwide. When comparing the distance the community traveled with driving that same distance in a combustion-powered car, the estimated CO2e savings were over 65.000 kg. That’s the equivalent of 260 one hour passenger flights.

“We are stoked that we got so much participation even though it was the first Suunto Commuting Day and we had very little lead in time,” says Suunto’s Sustainability manager Heidi Heikkinen. “This shows how much interest there is — we expect the CO2e savings to increase next time.

“One single bike ride to work may not seem like a big commitment, but once you do that on a regular basis, you will start to see how it all adds up. And, when looking at the entire community, it is clear that thousands of people choosing human-powered commutes regularly can definitely make a difference.”

In its increased focus on sustainability, Suunto has given its community the ability to track human-powered commutes and – as an extra motivation – see the estimated CO2e savings compared to driving that same distance.

To get started, track your commutes with a Suunto watch or a Hammerhead bike computer and tag the activity as a commute in Suunto app. In Suunto app you will see how much CO2e you have saved.

You don’t even need to have a Suunto watch or a Suunto compatible Hammerhead bike computer to track your human-powered commutes: you can also use Suunto app and track with it for free. You can download Suunto app for iOS here and for Android here.

Committed to be a force for good

Promoting sustainable everyday choices is part of Suunto’s commitment to being a more responsible company. Today, more than 90 % of Suunto products are made in its factory in Vantaa, Finland. Since 2021, its HQ and factory have used 100% renewable energy. And to keep things transparent, it has recently published its first annual sustainability report that you can read here.

“Suunto’s approach to sustainability is to increase positive effects, not just to reduce the negative ones. These are called, respectively, our handprint and footprint. We aim to tread lightly, and be a force for good. We believe in the power of community. Together, we can affect change by raising our voices and taking real action. Our ambassadors and our community care as much as we do,” says Brand manager Antti Laiho.

Learn more about tracking human-powered commutes and your CO2e savings