FREE SHIPPING OVER NOK 1800 | OUTLET | SIGN UP FOR NEWSLETTER

Big data for Vertical Week 2019 is here: find out who came out on top!

Big data for Vertical Week 2019 is here: find out who came out on top!

Like every year after World Vertical Week, our data analysts have combed the stats collected on Suunto app and presented us with the countries and sports that have climbed the most.

When we crunched the statistics from all the training around the world during Suunto World Vertical Week 2019, we felt our hard work had paid off. It had given you all the excuse to chase meters outside, whether on behalf of your nation, chosen sport or for your own challenge – exactly our intention.

There’s something about the sight of a hill or mountain in front of us that calls us to push ourselves. The challenge of the ascent is just as satisfying as the view from the top. That’s why we do it! Well done to everyone who participated.

This year, we first report a major upset. In the previous two years, Austria has come out on top as the nation that achieves the most vertical gain by average. Not this year – the Alpine nation has been knocked off its perch. This year, Italy, Slovakia and Slovenia, all mountainous nations, climbed more than Austria. But more surprising, Portugal also came in ahead of Austria.

In the last two years the Swiss have also come in near the top, but this year they have dropped to the eighth position. What’s happened in Austria and Switzerland? Someone tell us!

This year, Spain deserves an honorable mention. Spain came first in three divisions: totals per country, mountaineering, and trekking. It was also in the top five for four different activities: mountaineering, trekking, mountain biking and cycling. All up, Spain features in six of the nine country-related lists below, the only country to do so. Well done Espana!

Here are the results by nation

While these numbers might not seem so mind-blowing, remember they are averages, and a high average is indicative of many big days out in the hills.

This year we also decided to look at the totals per country. In these countries, World Vertical Week participants have been really active and gotten out there to climb, even only a little, to add on their country’s total number. These little efforts have added up. 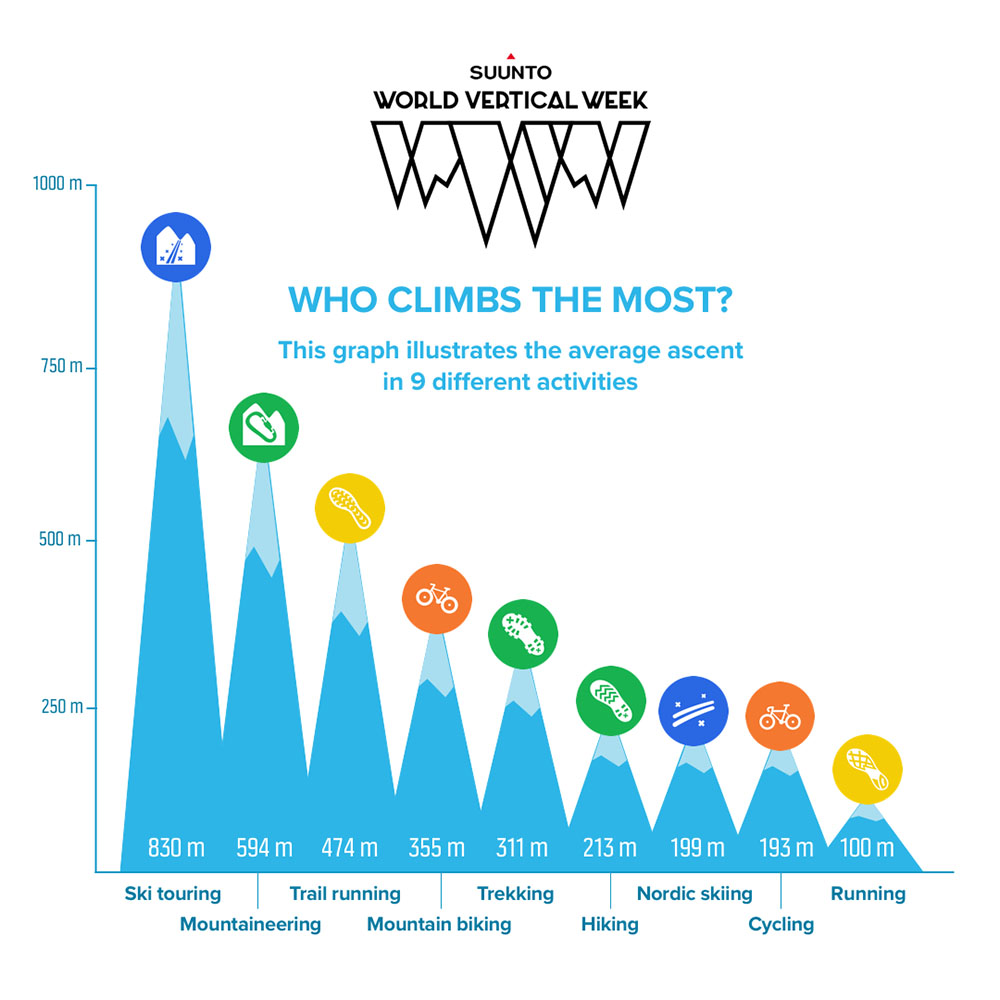 At least as interesting as the country numbers are the activity specific stats. From these, we can see that skiers clearly put in the biggest average days. Trail running and mountain biking are probably under-represented because it’s winter in the populous Northern Hemisphere.

Like Vertical Week 2018, ski touring, mountaineering and trail running came out on top this year. The question is, which nations did the most of each?

Asia dominating, showing the growing popularity of the sport in the region!

These nations have favorable weather for cycling in March!

While we can’t give away too much information here, such as who and where, we can share some insight in the individual top performances over the week: To be on the pointy end of the rankings one had to climb more than 10000 meters over World Vertical Week. And to stand out with a single activity one had to climb 4000+ meters in one go!

Thank you, everyone, for participating!