Freedive world record holder  William Trubridge has another mission beyond going deep: cleaning up our oceans.

For anyone who spends a serious amount of time either working or playing in the ocean, it’s a near-impossible problem to ignore: plastics are filling our oceans. Even if your particular stretch of sand and water still appears pristine, it likely isn’t – as these materials (slowly) break down, they become microplastics – an ever more difficult problem to understand and deal with. In Long Island, the Bahamas, home to world-champion freediver William Trubridge and world-class freedive location Dean’s Blue Hole, it’s an everyday problem. We talked to the man who lives quite literally in the ocean what he is doing about it. 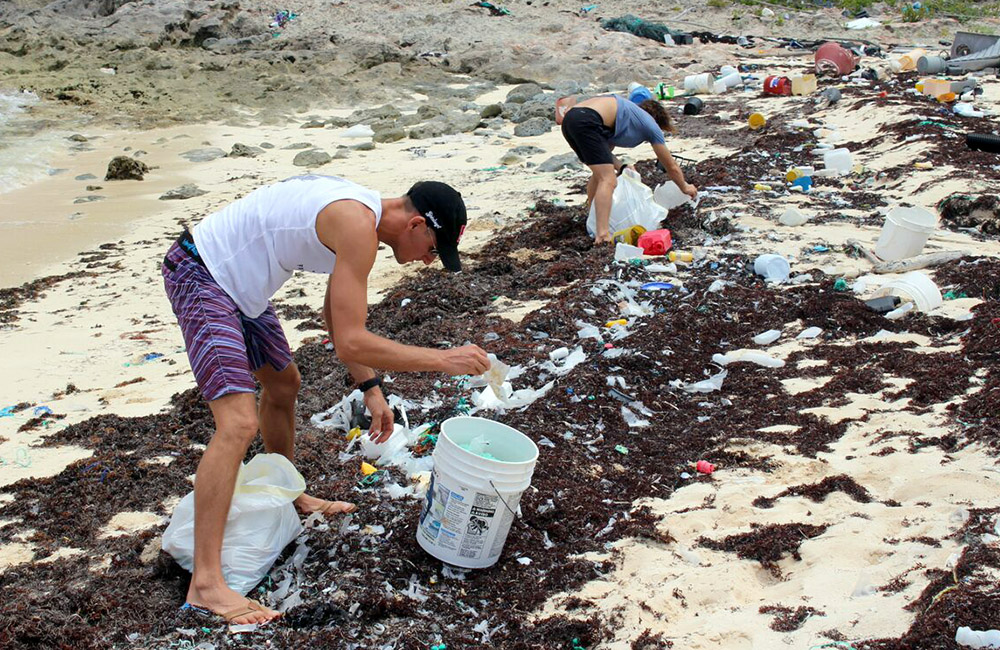 This is an issue you care about.

I have to – it’s in my backyard. Worldwide, plastic pollution – we reached the tipping point a long time ago. The Queen of England has banned single-use plastics from the castle! I’m an ambassador for the Ocean Conservation Alliance, run by Doug Woodring, who was one of the original people to discover and explore the Pacific Garbage Patch. His organization has done a lot for our oceans with things like their Plastic Disclosure Project – where they help businesses track their plastic use and offset it, much like companies do with the carbon footprint.

What does the ocean plastic problem mean for you?

Locally here – especially on my island – Long Island – the swell and tradewinds push garbage all to the north end of the island and it all collects in the bays and coves. And Dean’s Blue Hole is one of them. So we organize cleanups during events and competition, and we keep a bucket and just chuck in a little bit each day.

Where is the garbage coming from?

There’s a lot of theories about how plastic is getting in the water, and I think a lot of them are misguided. A lot of people blame cruise ships, but that’s not the case – you can see it in the trash itself.

More than half of the plastics that wash up in the beaches in the Bahamas are these little plastic bags of drinking water – in poorer countries, they get most of their drinking water from little 250 ml bags. They just tear off a corner and chuck it in the rubbish – but the rubbish ends up in the sea. And we’re downstream from them.

A huge amount of the plastic waste is those plastic bags. There’s also Petrol cans, cheap fishing nets. We’ll grab 20 or 30 toothbrushes in a day – the kind sold in Haiti or the Dominican Republic. They don’t have the infrastructure for waste management. Words are in French or Spanish. For us, there’s no question where it’s coming from!

And not only does the trash pollute, it doesn’t degrade, it just turns into smaller pieces – microplastics. For every plastic bag we see, there are thousands of millions of smaller particles you can’t see. Those all enter the food chain. So sea life is basically eating plastic all the time. And we’re at the top of that food chain. That can’t be good. Huge quantities of toxins are in the fish that we eat, and it’s killing sea life as well.

How can divers help?

The most effective way for divers is to help is to reduce their own use – less single-use plastic. Straws. Bring your own bags to the supermarket. Awareness of that is becoming more common – A lot of regions - cities, countries, are banning plastic bags. There is a ground shift movement to less plastic.

That’s in the developed world. But we also need to see that in the less developed world, and it’s a lot more difficult there. When you’re visiting those kinds of countries, put pressure on the local businesses, to take a more thoughtful approach to recycling and use.

And talk about it. Because most people simply don’t know. If you go into a supermarket in Honduras, talk about it. The more people that bring that message, the better. It will have an effect.

Doing cleanups and tackling that end of the problem helps, but not as much going to the source. Changing your own behavior and leading by example.

You also have some pretty crazy ideas about how to help.

One of the things I wanted to do, and so far it’s been a failure: I’d love to get the Bahamas to convert plastic to diesel. We have to ship in every once of diesel in the islands. There are machines – they’re not cheap – but you chuck in plastic and outcomes diesel. But in the end it’s quite effective if you have a good central hub. That’s a profitable way of cleaning up, but the initial investment is quite high.

You’ve also gone out on a limb about the plastic water bags.

Yeah – you know, some beaches are just carpeted with these bags. There are machines that obviously create this bag. The business that makes these machines in American, and basically aware of the fact that they’re creating a huge amount of waste that can’t be managed. So I got the CEO on the phone. Initially he was evasive, but he admitted that particular product that they are supplying is doing a huge amount of damage. His argument was that it’s better than bodies on the streets – people dying from clean water.

It’s hard to argue this defense – because it’s not completely wrong. So I’ve got in touch with a bunch of companies that work with biodegradable materials. Of course, any material that is biodegradable will biodegrade with water. So what’s left? The only other way is to change the whole system. In the Bahamas we use 5-gallon plastic jugs for drinking. But in a lot of those countries they can’t even afford to buy one or two jugs because they’re living so hand to mouth that they won’t even buy a jug. We need a few million jugs, and we get the government to ban plastic bags. Not as simple as it sounds, but we’ve got to get there somehow.

Learn more about the problems facing our ocean at Will’s efforts at the Ocean Recovery Alliance – and please, do what you can to help battle the problem!