FREE SHIPPING OVER ฿6,000 | EASY RETURNS | SIGN UP FOR NEWSLETTER

With five satellite navigation systems guiding your Suunto 9 Peak Pro, you can count on greater accuracy wherever you are - running under skyscrapers or deep in the mountains.

GPS is just one of many. It stands for Global Positioning System and is a US based global navigation satellite system (GNSS). There are four other GNSS and counting. With more of them connecting to your navigation device you’ll get better accuracy, more often, than with one only. That’s because it’s more likely a satellite will be directly above your position and able to send and receive clear, fast, unobstructed signals.

It almost seems like science fiction: hundreds of satellites in orbit around the planet sending and receiving signals from billions of devices. But how does it all work?

A GNSS system is a group of satellites strategically placed in orbit to generate and relay geospatial data via radio signals to connected sensors on the earth – including your Suunto watch. GNSS satellites orbit the planet once every 11 hours, 58 minutes and two seconds. Each satellite transmits coded signals containing the satellite’s precise orbit details and a very stable time stamp from an atomic clock.

Space: the satellites orbiting our planet.

Control: This part includes ground stations located around the equator to control, monitor, track and communicate with all the satellites.

Users: That’s you and your Suunto watch. Or your mobile phone. Your car’s navigation system. The entire IoT! Each device includes a GNSS receiver which comprises an antenna and a processor. The former receives the signal, while the latter decodes it. 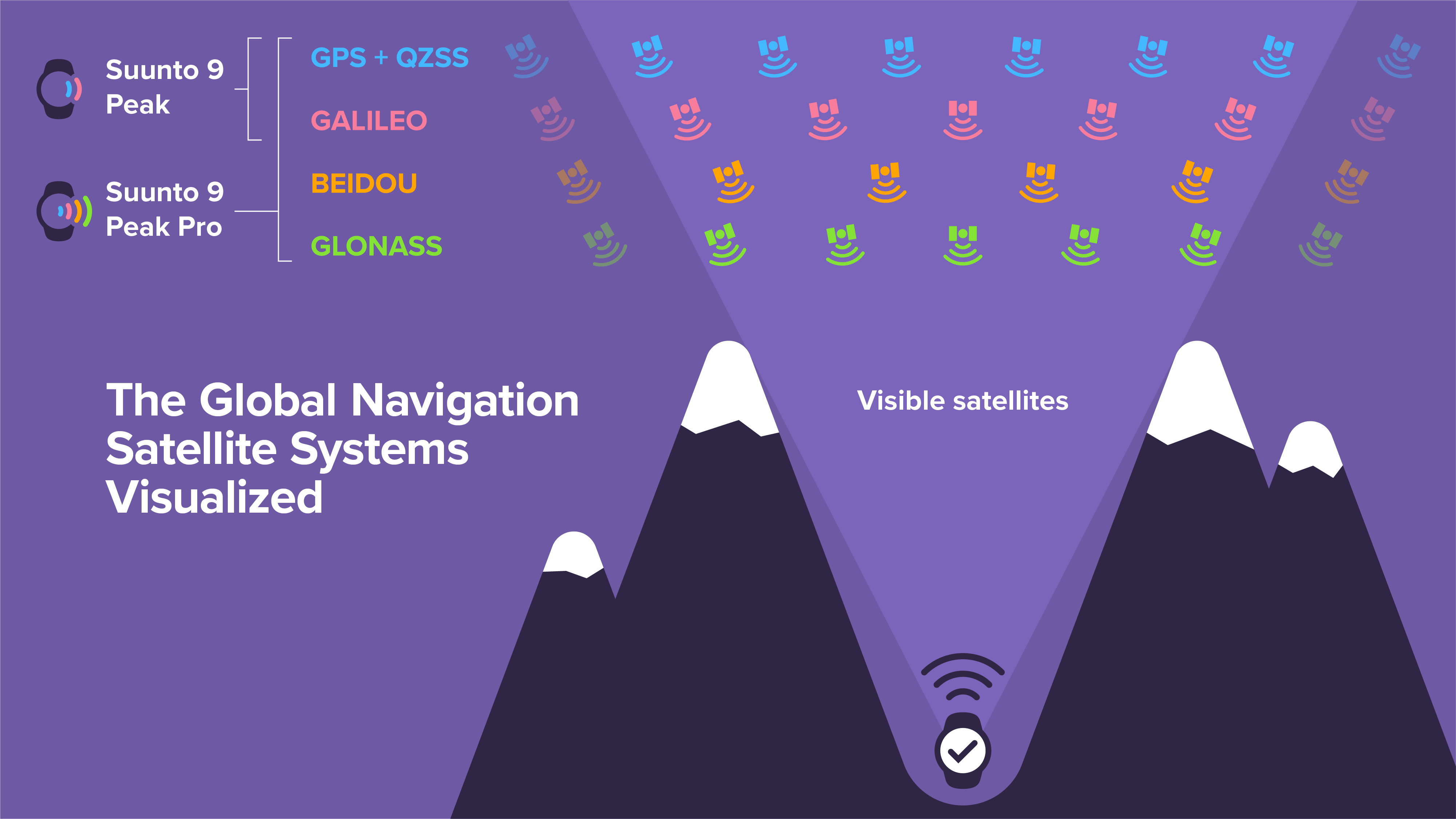 Five systems is better than one

With the release of the Suunto 9 Peak Pro, navigating with a Suunto watch and accurately tracking the route of your activity has never been better. The GPS, Galileo, GLONASS, BeiDou and the QZSS global navigation satellite systems all work with the new sleek and versatile watch. Moreover, the watch’s navigation system is controlled by a new Sony chip that requires less power, resulting in less drain on the battery.

“The increased number of visible satellites that can be utilized simultaneously will improve the likelihood your watch positions you accurately,” says Markus Kemetter, product manager at Suunto. “This is especially the case when you’re in areas with obstacles, such as a city with skyscrapers or between steep mountains where part of the sky is blocked. “In addition to being more accurate, the Suunto 9 Peak Pro’s navigation system consumes less power giving the user longer battery life.”

“Another super important thing affecting your tracking accuracy is the assistant data coming from Suunto app every time you sync,” Markus continues. “Keeping that up to date is crucial for accuracy – so sync regularly.”

They work together by default

With all those satellites orbiting the planet and connecting to your watch, it doesn’t matter whether you’re running in Manhattan or mountaineering in the Himalayas. You can count on the best accuracy of any Suunto device we’ve ever made. And there’s no need to fiddle with the settings to make any selections.

In the Suunto 9 Peak Pro all five GNSS are simultaneously active by default. You don't need to do anything"

Change your navigation settings to extend your battery life

You can change the Suunto 9 Peak Pro’s navigation settings to extend its battery life.

This is the setting for optimal accuracy. In Performance modem, the Suunto 9 Peak Pro’s battery can last for 40 hours before requiring a charge.

Selecting Endurance mode in your Suunto 9 Peak Pro puts the watch’s navigation chip into “duty cycle mode” – it sleeps half a second and switches on for half a second to get a fix. This extends the battery life and provides a less accurate, but still reliable track. The accuracy will, however, become poorer in more difficult terrain.

In this mode, the watch’s battery can last up to 300 hours. The mode extends the battery life by having the navigation chip on for 1–2 minutes every 30 minutes. This reduces the accuracy and is usually used by people who are traveling light and fast, can't regularly access a charge and don’t want to carry a battery pack with them.