Freediving champion and aquaman William Trubridge recently became the first person in the world to swim underwater across one of the most unpredictable channels in the world. He shares his knowledge on mastering the powerful dolphin kick.

Watching Suunto ambassador and freediver William Trubridge swim underwater like a dolphin across New Zealand’s wild Cook Strait, it’s easy to believe he possesses some sort of preternatural ability. There are, after all, few people on the planet who can swim 32 km in that manner for nine hours and 15 minutes.

In March this year, Trubridge achieved a world first: he swam under the surface of the strait before surfacing, and diving under again, all the way across, using the dolphin kick to propel him. A channel crossing of this kind had never been done before.

He did it to raise awareness about the plight of New Zealand's endangered Maui and Hector's dolphins. During his swim, his Suunto D6i Novo dive computer recorded 943 dives. Watch the short clip below below to see him in action.

Mastering the dolphin kick didn’t come easily to Trubridge. He’s had to work at it. “When I first started free diving, I struggled with the movement, and it’s probably because I never swam butterfly at high school,” he says. “It’s not a natural movement for me. It requires a lot of flexibility in your whole back and I didn’t have that at first. I still don’t have it to the same degree as some other free divers.”

He has patiently practiced the technique over a number of years. All that training has paid off.
Who better to ask about how to develop a powerful dolphin kick? 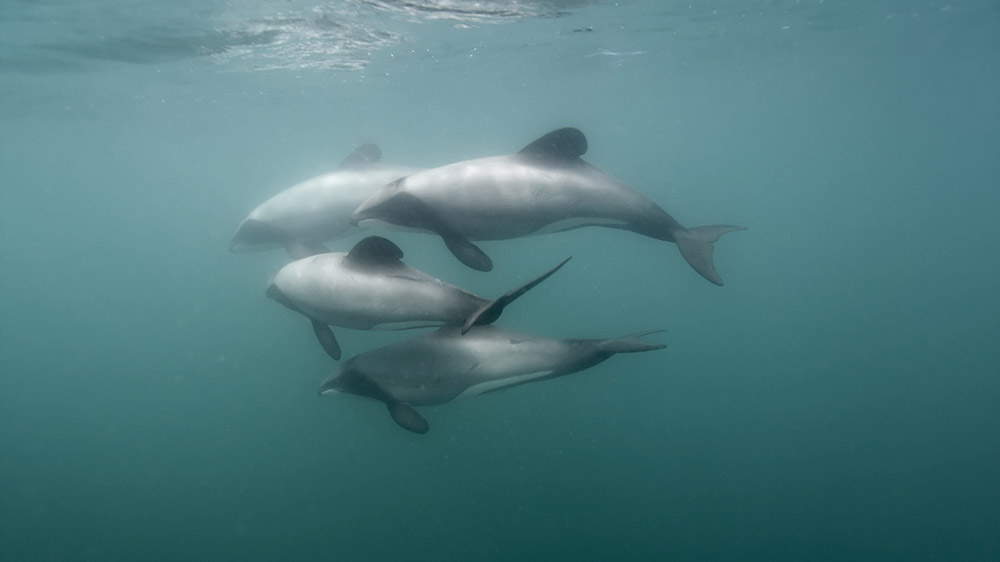 Trubridge did his epic swim to bring attention to New Zealand's dolphins and to pressure its Government to protect them.

Why master the dolphin kick?

Simple answer: it feels awesome. “You can really fly through the water at a good speed for a human being,” Trubridge says. “It’s fun to play in waves. You can swim towards a wave as it’s about to break and jump out the back of it like dolphins do. Or you can swim down to 10 m, turn around and swim back up as fast as you can and actually breach clear out of the water because of your speed. It’s a lot of fun to play around with a monofin.”

It’s also an important stroke for freediving, especially for the Constant Weight discipline. Using a monofin and a dolphin kick is the most efficient propulsion, and is best the way to dive the deepest and longest.

How is it done?

It’s the same stroke as butterfly swimming, however it’s done underwater. A monofin or flippers are used in freediving to gain a bigger surface area for propulsion. “The movement is generated by an oscillation of the pelvis, forwards and backwards, controlled by your lower back, and abdominal muscles,” Trubridge says. “It starts a wave that’s sent down your legs into the fin. In order to transmit that wave efficiently you need to keep your legs straight, using your quadriceps, hamstrings and calves. Your upper body, ideally, stays pretty stationary. You can have your arms out in front of you which is a lot more streamlined, or by your sides which is more relaxed.”

How to develop the underwater dolphin kick?

One common mistake, Trubridge says, is to start out practicing the dolphin kick with a monofin. Because the monofin is so powerful it compensates for bad technique. “You can bend your knees, and move inefficiently, and still get good propulsion with a monofin,” Trubridge says. “My advice is to always start with something that doesn’t have the same surface area, like really small flippers, and practice dolphin kick with those, which will be a lot more difficult.” Alternatively, try without flippers.

The practice: Underwater, extend your arms and try to dolphin kick and get good speed. Don’t be put off if you don’t move forward at all; it takes time to develop the technique.

Position yourself vertically in deep water with just your head and shoulders out of the water. Extend your arms above your head. Now, try the dolphin kick, keeping yourself as high above water as possible while staying in the same spot. “It becomes tiring very quickly,” Trubridge says. “It trains the muscles you need in your core and legs, and after a while you will find yourself slipping down into the water.”

Any exercise that improves core and leg strength will help. However, Trubridge says specificity of training is important. “Squats, crunches, those sorts of things, will target those muscles, but I prefer to target them in a way that is more specific to the way they are being used in the stroke,” he says.

Swinging: Find a hanging bar, and hang from your hands, with your palms pointed away from you. Using your core muscles, swing your legs back and forward, keeping them as straight as possible. Don’t use momentum to swing, but rather the abdominal muscles.

Pike pull up: From the hanging bar, do a pull up with your legs in the pike position, or in front of you at a right angle to your upper body.

The monofin is the best for deep dives, maximum speed and efficient movement. The downside is they are hard to wear for long periods of time. They have to be strapped to the feet very tightly, which can cause blisters and cramps.

Flippers are better for relaxation, recreation – spearfishing and snorkelling, for example – and for training. They offer more versatility.