When you imagine Caribbean islands, images of unsullied golden beaches come to mind. But out-of-control plastic pollution means this isn’t always the reality.  Suunto ambassador and world champion free diver William Trubridge is on a mission to change this.

When William Trubridge first moved to the Bahamas for free diving, he found himself developing an unexpected obsession. To his surprise a near carpet of plastic pollution covered some of the beaches on Long Island, the location of Dean’s Blue Hole where Will regularly trains. 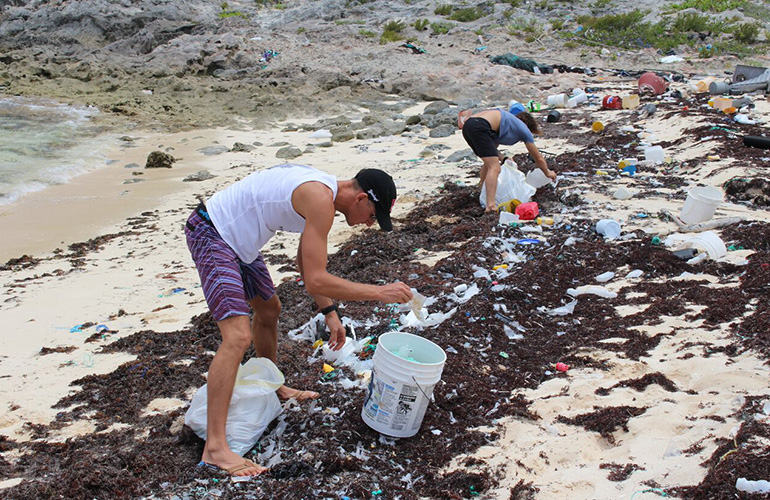 Will tries to keep one or two beaches clean. © Willian Trubridge

“I just couldn't help myself from at least collecting a few bags of it and then once I started doing that it almost became an obsession or an OCD (Obsession Compulsive Disorder) thing,” Will says. “It's difficult to find time to clean the beach regularly, but we do organize clean ups to keep at least one or two beaches tidy.”

Will teaches free diving on the island at his Vertical Blue School and does plastic clean ups with his students. He says they are always shocked by the huge amount of plastic on the beaches.

“It's impossible to be a person who really enjoys free diving and not be affected by the sight of all the plastic,” he says. “One of the reasons I promote free diving and enjoy teaching people is because I know strengthening their contact and bond with the sea will change their behavior and make them more aware of this issue.”

However, clean ups barely scratch the surface of the problem, Will says, so he began researching the issue more closely.

During the clean ups he noticed one of the most common types of plastic trash he was collecting were small plastic sachets. They are used to hold 250 to 300 ml of drinking water and are sold in poorer countries such as Haiti and the Dominican Republic.

“People chew off a corner from the bag and slurp the water into their mouths,” Will says. “They then get thrown on the road or off a boat and one way or another they end up in the sea. “Probably more than half of the plastic washing up is these little bags. There's millions and millions of them.” It's impossible to be a free diver and not care about this issue, says Will. © Willian Trubridge

Will began looking into solutions and tried to find alternatives. He found companies that manufacture biodegradable plastic substitutes, but none can hold drinking water without biodegrading.

“My latest idea is to try and crowd source enough money to supply most families in Haiti with one big five gallon jug each so they can then refill them with water rather than buying sachets,” Will says. “The problem is these families don't have the free cash to even put a deposit down on one so they just go for the easy option and buy the sachets for a few cents.”

The next step, Will says, is to find people within Haiti and the Dominican Republic who could help organize the project once funds have been raised.