Talk to Emelie Forsberg and you'd think she's just another mountain-loving adventure girl with a fondness for baking home-made cookies. But behind the fun-loving Swede is a phenonenal podium-winning athlete – one who has excelled in several trail running disciplines – as well as competition ski-mountaineering.

A three-time Sky Running World Series champion (2012-2014), Emelie exceeds at marathon and ultra distance events. These are mountain trail races which feature several thousand meters of vertical ascent and range from 30 to over 50 km long over terrain that can range from loose rock to high altitude snow fields. To mountain runners these are races that are steeped in legend and lore, races like Zegama, Pikes Peak, Kima and modern classics like Transvulcania and the Diagonale des Fous.

She is fiercely competitive and has an impressive medal tally – too long to list here – but it's clear that winning is not her primary goal.

“I'm not going to remember a win in 40 years time — I will remember the view or the feeling,” she says.

There's a photo of her taken just before she crossed the finish line of the 80 km Mt Blanc marathon, a race that would crown her 2014 Skyrunning Ultra champion. It's distinctive for one feature – an enormous smile she can't contain. She looks as if she's just run a 5 k, far less a gruelling double marathon.

“From my heart I can truly say I enjoyed every second of it,” she wrote on her Facebook page shortly afterwards: “Pure skyrunning. J´adore! I love!” 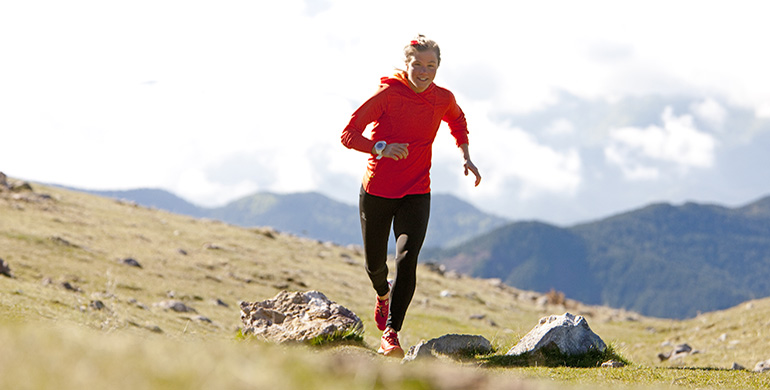 It's Emelie's infectious love of running that shines through above all else.

“It's hard to describe it's so good,” she says. “You get a really good feeling in your legs. You feel so light – you're just flowing over the ground. You feel like really wow, I could go on forever, or wow, what a great feeling.”

It was this feeling that propelled her onto the professional circuit. One of her first wins was a local uphill mountain race in Norway's Yotunheimen national park in 2010. What is extraordinary is that prior to the race, and on the same day, Emelie decided to go for a run that became a 50 km ultra with 4,000 m of vertical.

“I was free that day so thought I would run around,” she says by way of explanation. “It was super beautiful.”

Not all races are beautiful experiences however. During the 2014 Kima she took a wrong turn and dropped from 1st to 5th position. She still finished 2nd.

And besides official races, she's also a fan of the Fastest Known Time (FKT) movement, which are self-organized and (often) solo attempts to break speed records on mountains. In 2014 she set the overall record on Sweden's highest mountain Kebnekaise, shaving 15 minutes off the previous record.

Big mountains play a big part in her life. When she's not competing Emelie loves to hang-out in the mountains, camping, hiking, climbing and skiing in winter. Of course, that also means competing on skis too, in the ski mountaineering world cup. Despite being a relative newcomer to the sport, 2015 brought Emelie her first podium, a third place in the Trofeo Marmotta.

“I like to be out in the mountains in the winter too,” she says, “and this is just another way. The training is the same as before just different on skis. It's fun to race, it's good training – actually the hardest training I have ever done!”

Where next for the Swedish athlete? Whatever it is, it's bound to involve some big mountain adventures. “The best times are when you're in the mountains, where the clock and the world outside don't count. Mountains are simplicity, freedom and responsibility — everything that I love!”