Over the course of the next five days freediving fans around the globe can watch the record-breaking battles among the world’s most talented freedivers pushing the limits beyond what was once thought impossible for the human body to do.

On the white sun drenched shores of Roatan Island the gentle sound of the Caribbean Sea’s crystal clear water tentatively exploring the sand is lost behind the dissonance of diving activity coming from a dive platform located not far from the beach.

Divers are descending, safety protocols are being fine tuned, Alex St-Jean the official event photographer is testing his underwater camera equipment while the final training rehearsals are being observed in preparation for the CMAS World Championships that fin-kick off with an almighty duck dive on 6thAugust 2019 lasting five days.  The event has been organized by Esteban Darhanpé at the Roatan Freediving School and Training Centre.

Chilling in the warm waters of the Caribbean Sea, Roatan Island is situated alongside a part of the 1000km of Mesoamerica Barrier Reef, the second largest reef system in the world.

The best of the best from around the globe are gathered to compete at the event.  They compete not only to win but to be to a part of the freediving community.

A common misapprehension of freediving is that it is all about gaining the depth and in competitions this may be the case.  Competition diving and its many disciplines are only one aspect of the sport. For most freedivers, the sport is just about hanging out with friends and exploring the underwater world.

“To the observer, freediving is all about serenity and calmness – a peaceful interaction with the underwater world. It is exactly all these things, which is why competition freediving presents such a unique challenge.” says Will Trubridge, Suunto Ambassador and World Champion. 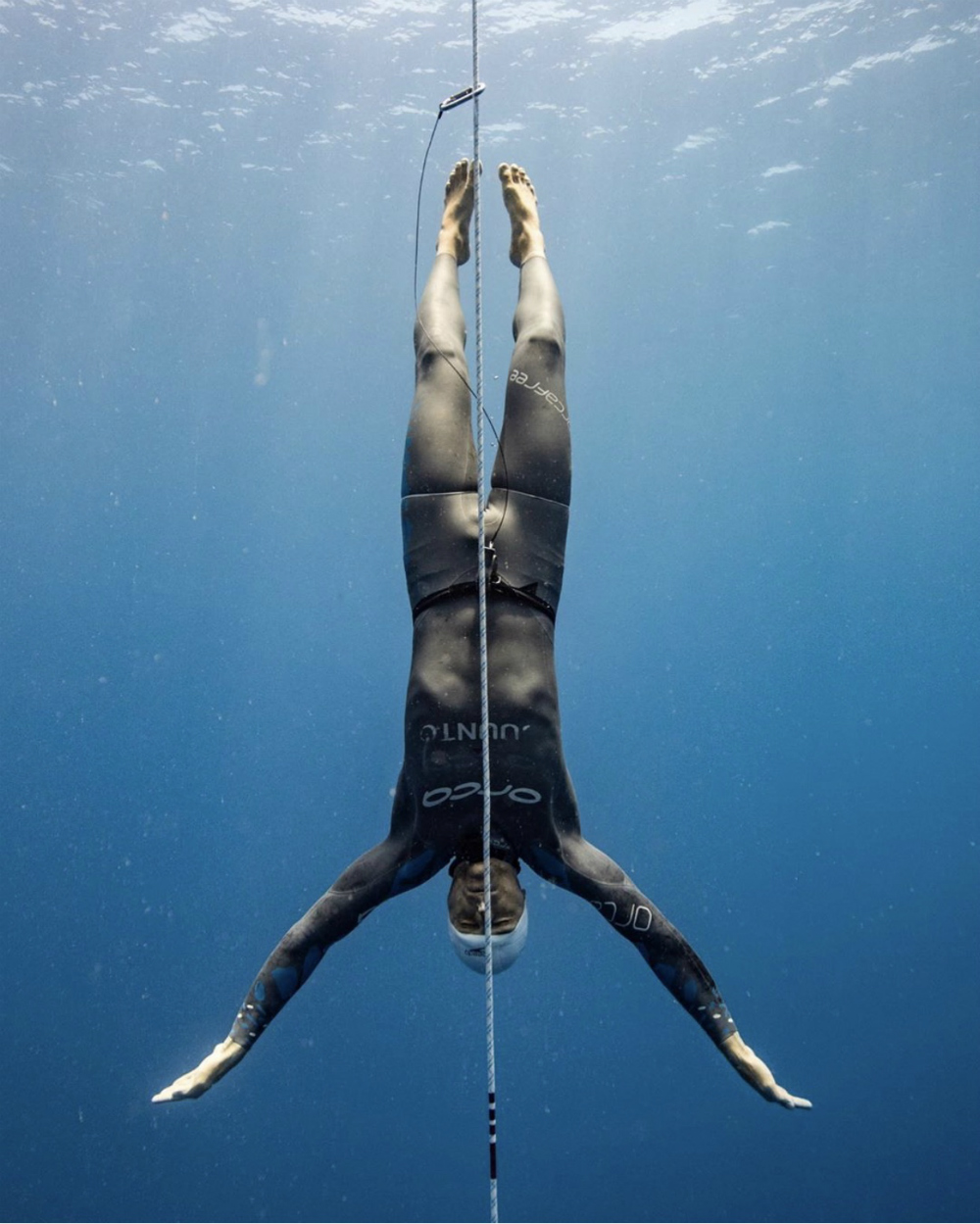 CMAS- The World Underwater Federation/Confédération Mondiale des Activités Subaquatiques founded in 1959 and is an international federation that organises underwater activities and events and is amongst the leaders in the scientific and technical research and development.  It also acts as a training standards agency in snorkel and scuba training.

AIDA- International Association for the development of Apnea was created in 1992 after the film release for Big Blue.  The rise in training freedivers and record breakers was developing at a vast rate and the AIDA was founded to keep track on the growing interests.  The largest organization world wide of freediving event organizers, it also actively participates in scientific and technical research and development to help the world see freediving not as a thrill seekers sport, AIDA wants the recognition that “freediving is safe, fun, challenging and a fantastic blend of inner peace, concentration, technique, training, friends and team work”.

Safety Teams/Safety Diver- the Dive Safety Team is headed up by Italian Freediver Marco Cosentino and is currently holding the position of Chief of AIDA Safety Committee.  He has a team of twelve safety divers there for support including Suunto Ambassador Sofia Gomez’s coach, freediver Johnathan Sunnex aka Johnny Deep.

Announced Dive Time- the official target time the diver will take to complete the dive, must be announced pre-dive.  “You announce your dive on that day. If something goes wrong, then you don't have a second chance. It creates more of an element of chance. There is also a lot of sleuthing and spying to find out what other freedivers have done in their training to gauge how they're performing, and using that information to make pronouncements.”  Says William Trubridge.

Official TOP- Time of Performance, as during the competition the organisers will be sticking to strict scheduling and the divers are assigned a time the dive must commence so all pre-dive preparation must be completed by the official TOP.

Duck Dive- the way a free diver ‘enters’ the water is by this type of dive as it gets the diver in a good position for descending and helps them along to few meters deep very quickly.

Freefall- once the diver reaches the point of negative buoyancy on their descent and begins to sink in a state of complete relaxation without finning down.  This year we have spotted the athletes with strings tied around their thighs, Will Trubridge uses his to slide his thumbs in place so his arms stay positioned during freefall in order to conserve every bit of energy.   It is this part of the dive that can induce the most pleasant feelings. Many freedivers feel euphoric as they enter an almost trance-like state.

Tag- a marker the diver must grab and bring back up to the surface when competing in depth competitions.

PB- personal best is the athletes, longest or deepest dive they have achieved.  Can also be measured by distance.

Surface Protocol- the sequence a freediver must completion upon reaching the surface after a dive in a competition to convince the judges that the diver is lucid and not unconscious.   The diver must face the judge’s direction remove googles and nose clip, give the OK signal and say in English “I am OK”/I’m OK” with a 15 second time limit.

Hypoxic- where the body is in a state of inadequate oxygen at tissue level.  If the diver doesn’t get to the surface with enough oxygen to be lucid enough to complete the surface protocol they will be disqualified.

Cards- white, yellow or red.  The judges will show a card at the end of each competition dive to signal whether the diver has had a fine performance with no penalties, yellow means the dive was completed with penalties and red signals disqualification from the dive.

Much like the opening ceremony of the Olympics we hope to see the atheletes parading around Roatan wielding flags, looking strong and generally building the hype, however it may be more of a technical meeting!

Suunto Ambassador William Trubridge holds the world record in this natural discipline.  Will set a new world record in freediving by diving to 101m with no fins in Dean's Blue Hole in the Bahamas. The new world record was set mere three days after he established an astounding new world record dive of one hectometre.  Will's record-setting and mind-boggling constant no fins dive to 101 meters took 4 minutes and :08 seconds to complete.

Constant weight APNEA.  This discipline means the diver can wear fins, however they are only allowed to touch the rope to stop their descent and start their ascent.

Rest day for re-ups on oxygen and rest.

More monofins than you can shake a pair of bi fins at.

The winners get to take home a magnificent Suunto D5 dive computer and also collect a cash prize. 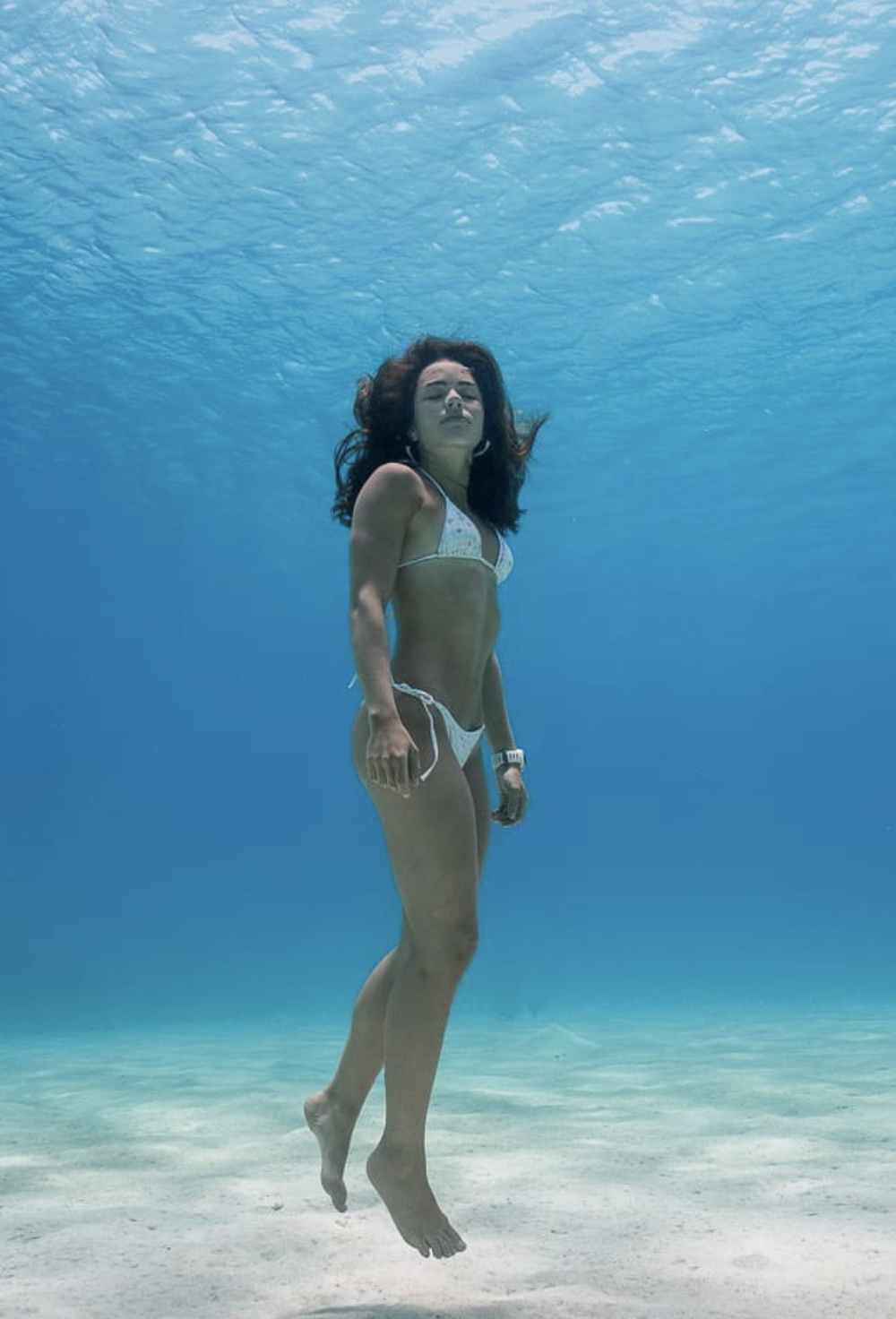 Follow on Instagram @Suunto Dive to keep up with Sofía Gomez Uribe as she takes over for all latest news from the dvie platform.

Anterior
Fuelling the engine: 6 principles of nutrition for athletes
Siguiente
Max Ammer, Raja Ampat and the richest reefs in the world