American ultra-runner Mike Foote breaks an obscure record: most vertical height meters on skis in a 24-hour period. Here’s how he battled – excuse us, suffered – through it.

Let’s get things straight right away: there is virtually nothing pleasant about busting your legs and lungs up and down a single 1000-foot (about 300m) ski slope for 24 hours, non-stop. There might, however, be a little bit of pleasure in knowing you can do more laps on said slope than anyone in the world – a pleasure, we can assure you, that belongs wholly and solely to Mike Foote, aged 34, of nearby Missoula, Montana.

Well established in both the worlds of skimo racing and ultra-running, he was perhaps the perfect person for the challenge – he had the skill and technique on skis, and physical and mental endurance that it takes to run 100-mile races. Last summer he finished second at Hardrock 100 in Colorado.

Mike spent months training to dial in his optimum race speed – and masterminded the logistics of race day with a support crew, plenty of calories on hand to keep him going, and a little help from the mountain operations team who kept the ski slope in prime condition. To learn more, read the words below from the (probably still tired) man himself. 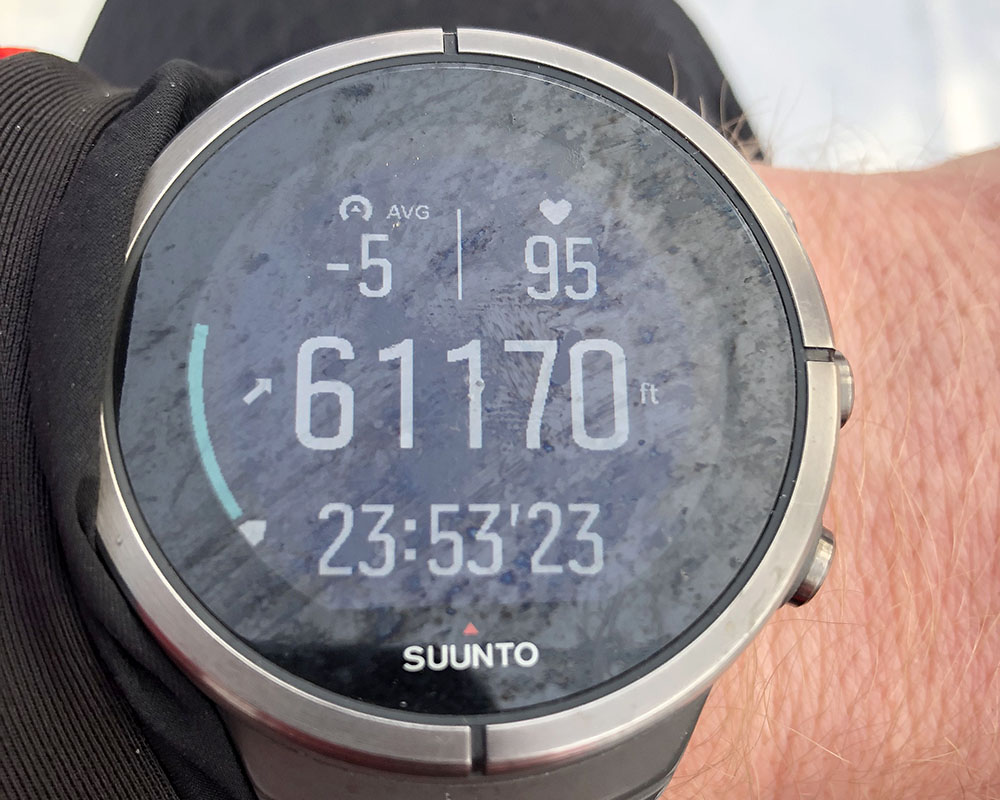 So, what was your total vert for the day? What was the old record? 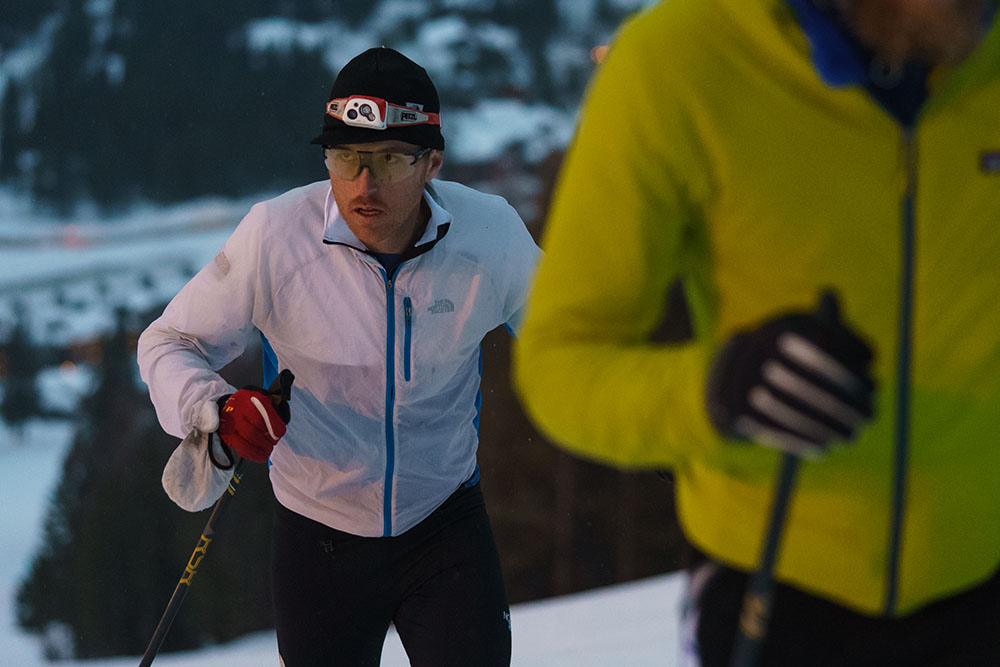 Skiing into the night. (©Matthew Irving)

When and where did you set the record?

I started at 9 am on Saturday, March 17th and went until Sunday morning at 9 am. I did it at Whitefish Mountain Resort, which is a ski area where I used to ski patrol and began uphill skiing and backcountry skiing. Conditions were variable. Quite warm and mashed-potato type snow during the day, and then frozen and slippery hard-pack at night. It made for challenging conditions for skinning, but we were able to manage it all OK.

Could you walk us through the day?

My plan for the day was quite simple. I really wanted to start conservative, but at the same time not slow down too much. I was able to get around 33,500 ft in the first 12 hours, which gave me a buffer for the latter half of the day. I worked really hard to limit any downtime. I didn’t sit down once in the 24 hours. For the most part, things went as planned. The snow froze hard at night, which made for really tricky skinning and teeth chattering descents. As a team, we worked through it and I had pacers working to keep the skin track in and not too iced up. I started the day off feeling pretty poor actually. Perhaps it was nerves, but it took me almost two hours to feel like I was getting into any sort of rhythm. Also in the middle of the night, I hit a wall and had to work really hard to keep from slowing down too much. Once the sun came up for the final 2 hours I got some energy back. For the final lap, about 15 friends joined me to celebrate and it gave me an insane boost of energy and I was able to complete one of my fastest laps of the day!

When and how did you get this idea to go for the record?

I began thinking about it after racing the Hardrock 100 last summer. I enjoy long endurance events like 100 Mile running races, but ski-mountaineering races are often only in the one to two hours range. I wanted to see what I could do on skis in twenty-four hours, and this idea began to form.

How did you prepare for the record attempt?

By skiing a lot! And also by geeking out on training and metrics. I spent a lot of time going up and down steep slopes trying to get my technique and form as efficient as possible and to try and find the best ascent rates while staying in an easy aerobic effort. I knew I would need to be very comfortable going uphill for a very long time without blowing up, so I spent a lot of time finding that fine balance. My Suunto Spartan Ultra was the perfect tool for this. 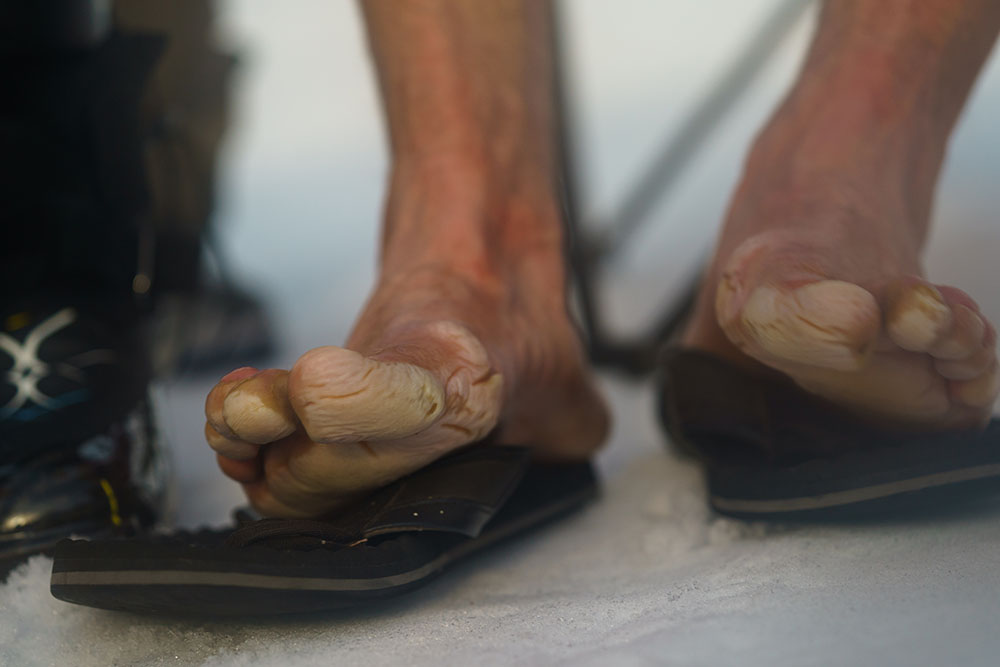 How would you compare a 100-mile ultra-running race, like the Hardrock, and this record ski tour?

Well, the mental grit it took to get to the end of the 24-hour attempt felt similar to a 100-mile race. There were highs and lows and everything in between as I have experience in ultras. However, this effort felt so different from something like Hardrock 100 as I was racing a clock and not another competitor. It wasn’t better or worse. Just a different kind of challenge. It was just me and a mountain and I had twenty-four hours to see how many times I could climb it. It was a very simple goal in many ways.