Last week saw the twenty year anniversary of the discovery of a sought after treasure wreck submerged in the Baltic waters since 1771. 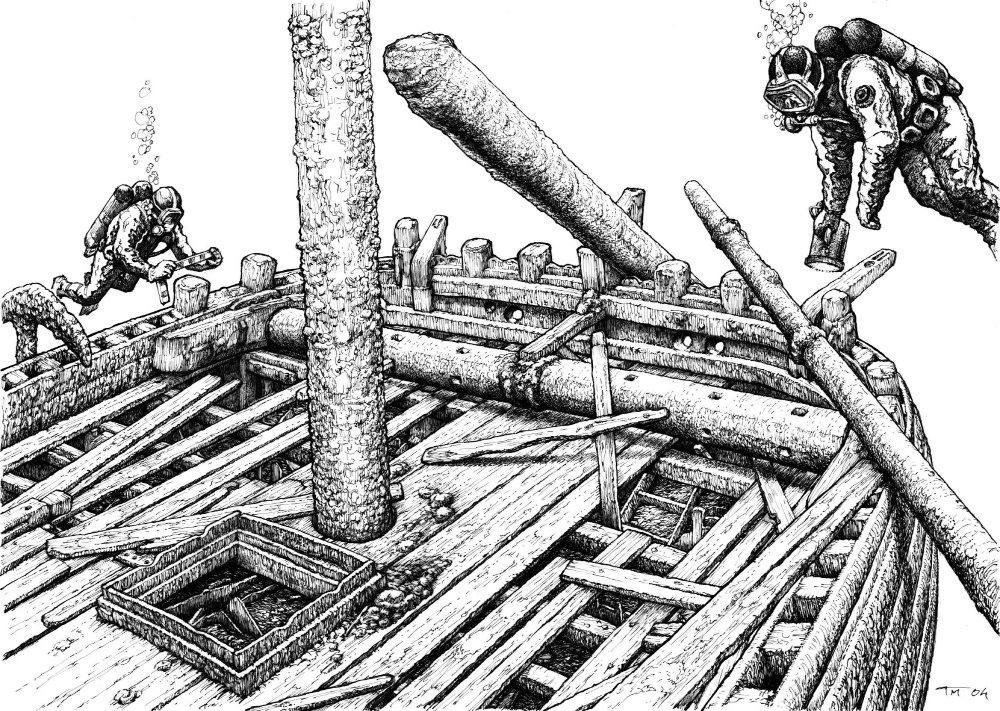 Bow of Vrouw Maria with divers. In the early stages of the work, investigations of Vrouw Maria were also illustrated by artwork. Drawing by Tiina Miettinen, Finnish Heritage Agency.

Suunto’s Dive Engineer Pasi Lammi and his dive team, the Badewanne, were invited by the National Board of Antiquities in Finland to join the expedition to create a 3D model of the underwater site. This was not the first time the Bedawanne had experienced the wreck, they were amongst a team of divers in 2007 that got to explore her pristinely preserved wooden structure. Diving access on previous archaeological expeditions have been limited on the wreck due to the increased risk of disturbing the sea floor and concealing the wreck further or risking damage to the delicate structure. 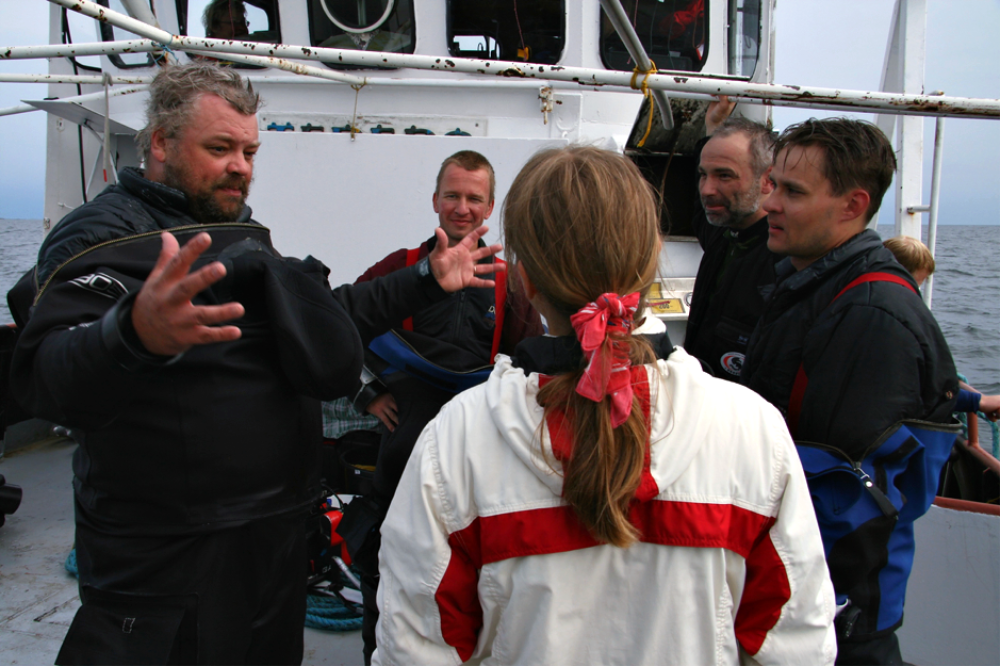 Down with the ship

The Vrouw Maria is a Dutch two mast merchant ship that set sail from Amsterdam on 5th September 1771 destined for St Petersburg, Russia but it never arrived in port. During late September the Vrouw Maria entered into the Danish Straights and the cargo was last recorded at the Elsevier (Øresund) toll before she sank. It was reported that after some navigational errors through the stormy Archipelago Sea the ship lost its course and ran aground. Obtaining only slight damage to the hull, the vessel fell foul of another grounding shortly afterwards this time losing the rudder when a large wave freed the ship from the sea bed and the crew could not control the water coming.

On October 4th 1771 the crew finally abandoned ship and made it to safely to nearby rocks after saving only a portion of cargo during the short window of opportunity they had as the water flooded in. There was some effort to stabilize the ship but the pumps were clogged with coffee beans leaked from cargo in the hold and finally, on 9th October 1771 the Vrouw Maria sank beneath the waves taking most of the cargo and revered luxuries down with ship.

Onboard the Vrouw Maria when it sank were bags of coffee, sugar and fabric dyes. The most precious items in the hold were artworks purchased by Catherine the Great at auction that year in Amsterdam on their way to her residence. Other luxuries including mirrors, ivory eggs, and flower bulbs headed for Russian nobility that still lay in the sea bed today. Little was saved during the rescue and even less has been salvaged off the wreck since it was discovered.

The positioning of the wreck on the sea bed had remained a mystery and regard was lost in the wreck for over 200 years. However, interests peaked in the 70’s when Dr Christian Ahlström discovered documentation of the incident in the Finnish National Archives that he then published. His findings in 1979 sparked an exciting search mission that was to last twenty more years.

A wreck was discovered in 1999 by the Pro Vrouw Maria society using a side scanner under Rauno Koivusaari’s leadership, and was positively identified as the Vrouw Maria.

Now twenty years later on the anniversary Suunto’s very own Dive Engineer Pasi Lammi has been invited to dive the wreck and take part in the 3D modelling project. Pasi and his dive team, the Badewanne Team are committed to working alongside the Finnish Board of Antiquities, Military Museum of Finland and collaborators from around the world in a bid to preserve the Baltic history. 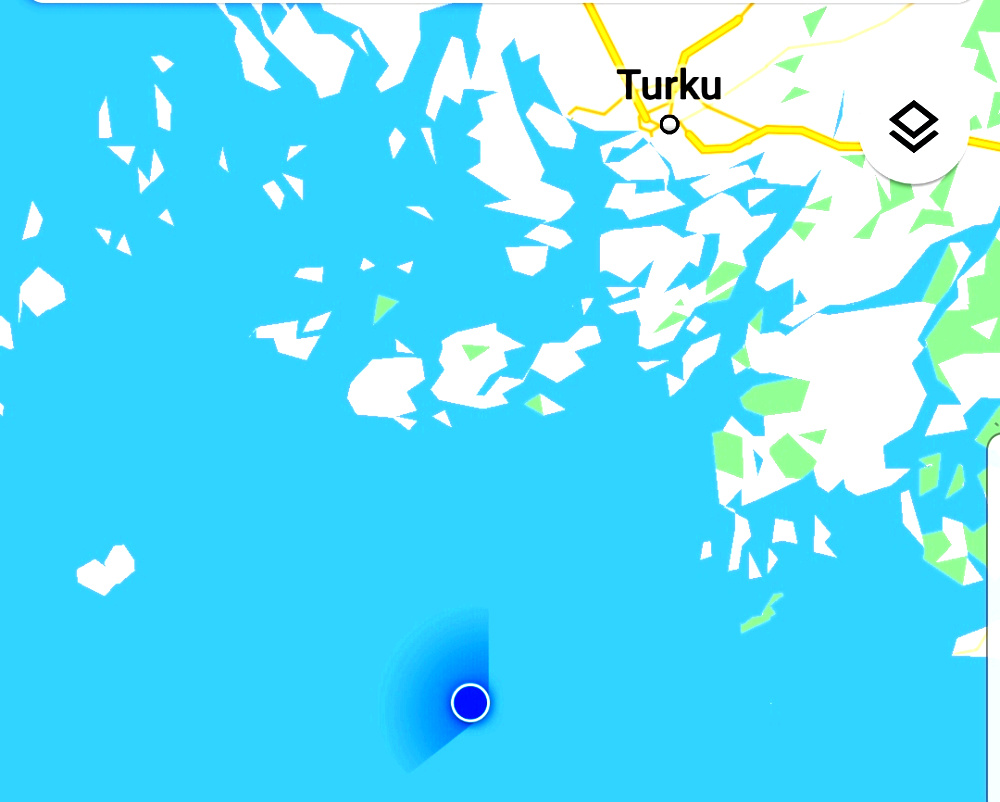 During 2012, at an exhibition called ‘Lost at sea, rediscovered’ there was a virtual simulation of the wreck that visitors of the Finnish National Maritime Museum could visit. This impressive footage was honoured with an award at the Europa Nostra Awards 2015 competition of the European Union.

“Through a simulation constructed by Aalto University and the Finnish Heritage Agency, the general audience could examine in detail the treasure ship, which in reality is difficult to access.  At the time, the Vrouw Maria simulation was a totally novel way of visualising the underwater world and making it accessible.”

The virtual simulation of the Vrouw Maria wreck received a special nomination in the research and digitalisation class of the Europa Nostra Awards 2015 competition of the European Union. Image by the Finnish Heritage Agency.

Now with team of volunteer divers who are revisiting the wreck and taking the latest in photo 3D modelling technology underwater to create an ultra-realistic interactive map of the wreck site people will be able to appreciate the ship in all its glory from above the water. The divers use a mix of videos, photos and photogrammetry to create the final product that will illustrate how far technology has come since the 2012 simulation and give a more in depth look at the wreck.

“Today was the first day and our initial mission was set up for the modelling to begin. We experimented moving the camera into different locations to get the best views of the wreck and setting up attachments to secure cameras. After this the team and I then test documented two locations so we could present the findings for the Finnish National Heritage agency. The project has just begun and the results will be released soon, and we certainly are excited to see the results.” Pasi comments. 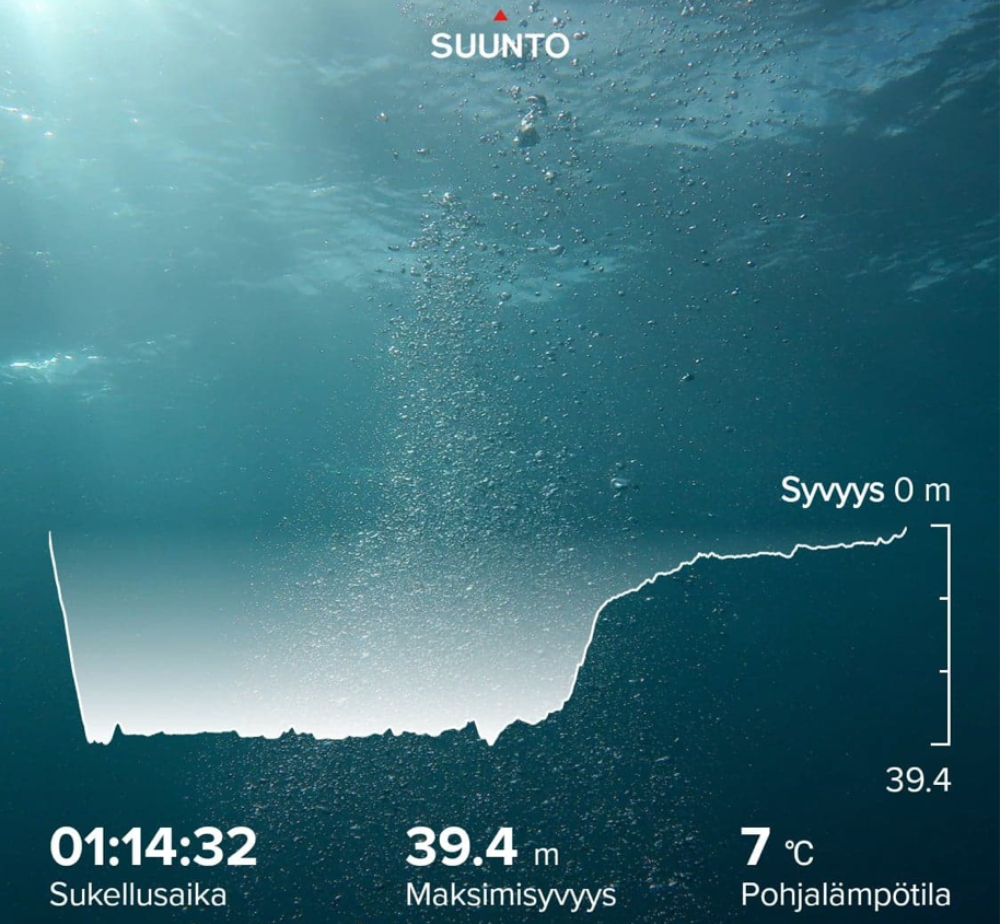 Pasi shared his dive profile from his Eon Steel paired with his Suunto App we can re live his dive with him.

The completed project will go on display at the new Stockholm Treasures of the Baltic that is scheduled to open its doors in 2020.

Before the final model opens at the museum you will be able to view the first version of the project on the twentieth anniversary of the discovery of Vrouw Maria, 28th June 2019, on the online 3D modelling platform, Sketchfab.com.

Pasi Lammi lives in the city of Espoo, Finland. He started diving in 2007 and had his first dives on a rebreather in 2009, after which he made the switch to JJ-CCR in 2014. His diving certifications include IANTD, NSS-CDS, PADI, NAUI and CMAS accolades and instructor level for both NAUI & CMAS training agencies where he teaches diving both in Finland and Estonia.

He is an active instructor and teaches both recreational level divers and technical but his heart lies in the technical side of diving. Pasi is also a very active dive club member and joins in activities with a number of local dive clubs.

When he is not training you will find him diving wrecks in Baltic Sea or mines in the Nordic countries. For Pasi diving is not only about seeking experiences of his own but also working as part of a team and sharing the experiences with others by the means of documentation of historical interests. He enjoys taking underwater images, videos and now working on 3D modelling projects has brought a whole joy to his diving. He takes great pleasure in contributing to the discoveries of new historical facts and building up the bigger picture of his cultural heritage. 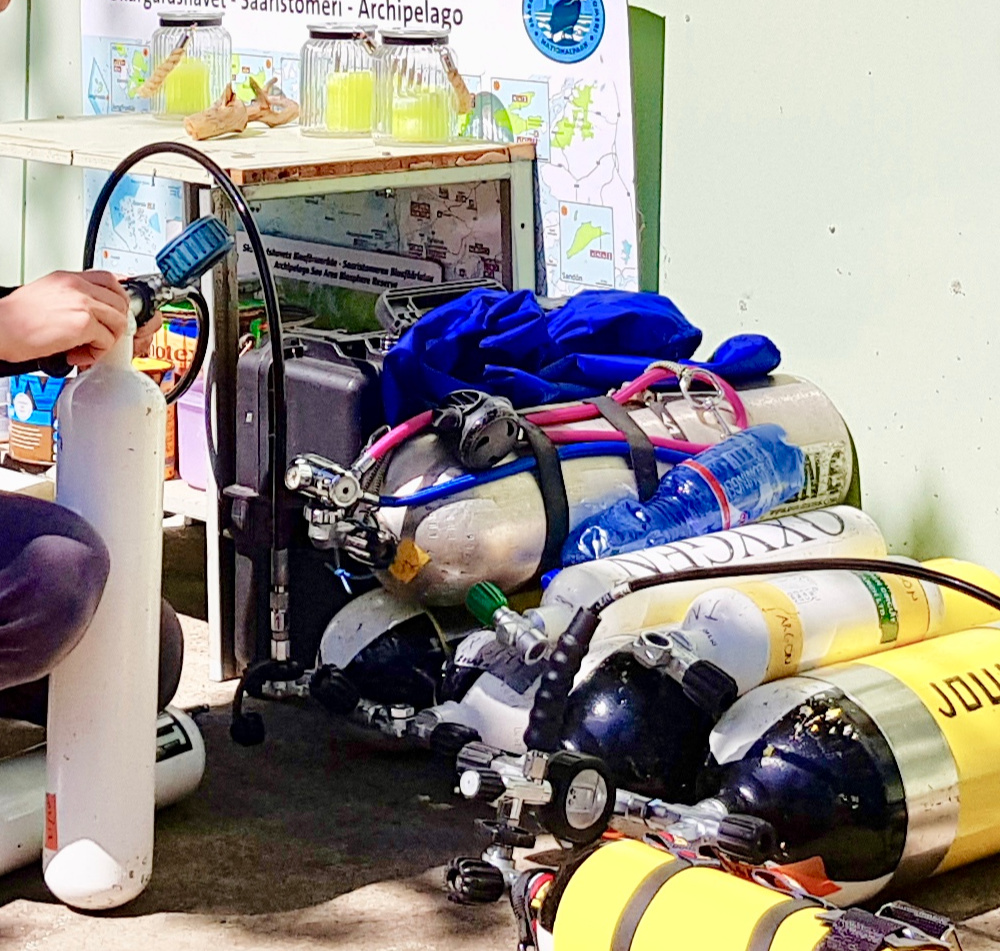 Filling cylinders on location in preparation to explore the Vrouw Maria on the anniversary dive, 2019.