Watch the video of the crazy trip and decide for yourself.

Sure, they had their mountain bikes with them. But with terrain so tough it’s hard to even hike it, what to speak of riding it, the question of what to call this madcap adventure arises.

The word expedition suits it better than adventure and 'challenge' doesn’t really do it justice. Watch the video below and read the report from the film crew below and maybe you’ll reach a satisfying way to define it.

One thing is for sure, hardcore!

So Far… We’ve Made It This Far

“No sympathy for the devil; keep that in mind. Buy the ticket, take the ride...and if it occasionally gets a little heavier than what you had in mind, well...maybe chalk it up to forced consciousness expansion: Tune in, freak out, get beaten.”
― Hunter S. Thompson, Fear and Loathing in Las Vegas

“There may as well have been fucking cows grazing over there and it was the hardest shit ever,” Kenny says, looking back at the snarled mess of terrain we’d spent the last two days traversing through, over and around.

He was bang on, as compared to the convoluted mess of sheer granite, talus fields, and ancient glaciers that lay before us; where we had come from really did look like an idyllic pasture, one that cows could be happily grazing – and it really was the hardest shit ever. We’d ridden our bikes less than 10 % of the time, pushing or carrying them for the other 90… great bike riding trip.

This wasn’t our ‘first rodeo’ as they say but looking down into the ‘venus fly trap’ valley this was the first time we’d contemplated changing our route because the terrain was too complex. Maybe we are getting smarter, realistically we’re just getting softer older. The steady decline in barometric pressure coupled with a few ‘storm warnings’ from our Suunto 9 watches helped to justify our decision while preserving a fraction of our collective egos. 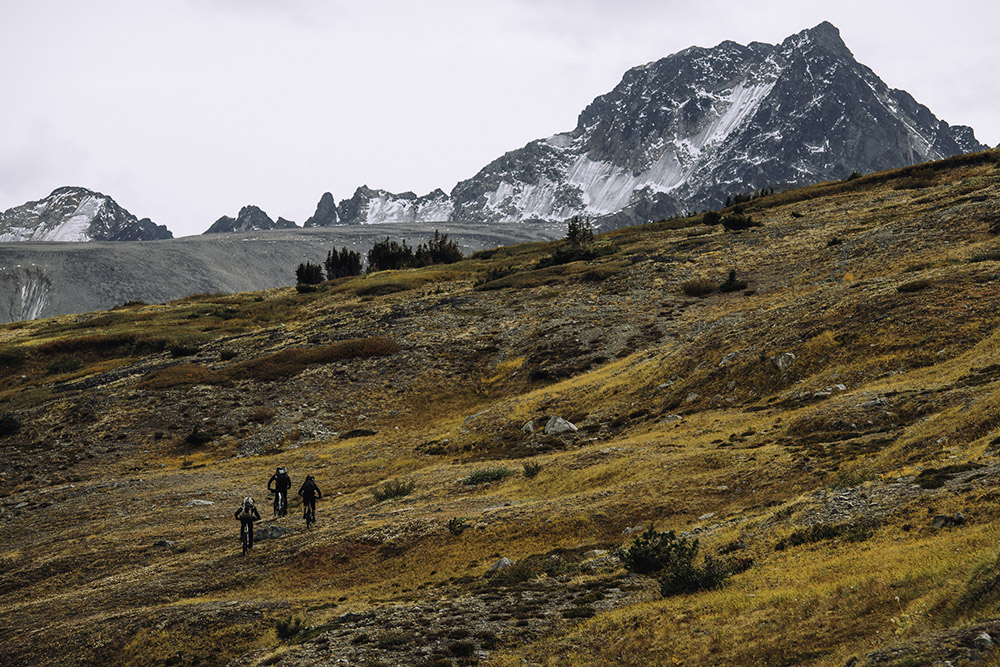 “Stuck in the bottom of the flytrap on a sunny day would be soul-crushing, add 20 centimeters of snow, and hell we might still be there.”

The route, as planned by Captain Kenny from the comfort of his office back in Campbell River BC would wind its way through approximately 200 km, over eight days through the Niut Valley, a remote northern section of the infamous Chilcotins. The Niut, is where the Coast Range meets the Chilcotin Plateau but unlike the ‘Chill’cotins it has no trail network and rarely sees even the most intrepid hikers let alone mountain bikers. I’m not saying we were the first, but I’d bet we’ll be the last [mountain bikers] to that zone.

Since 2016/2017 our little ragtag crew has been refining this style, colloquially referred to as ‘freeride bike packing, by our friend Brice Minnigh. A weird chimera of big mountain MTB riding, ski touring, thru-hiking, bike packing, and mountaineering. The route is usually a point-to-point attempting to link up ridable ridgelines and chutes while minimizing any travel at valley bottom where one must contend with soul-crushing bush.

This brings us back to the siren song of the Venus flytrap, which became easier to ignore as the rain’s tempo crescendo picked up outside our shelters. Turning around the way we came was not an option, it was hard enough once, and would only be harder dragging our tails between our legs. It was becoming clear our only option was to head over the pass at the head of the valley we were currently camped in and attempt to link back up with our original route.

As the crow flies, this was a ‘shortcut’, but not without its own unique challenges. Specifically, a glacier, which fed into an unstable talus field, immediately leading into a few pitches of grade five scrambling. One hand to balance your bike on your pack, one hand on the rock at all times steep. Topping out we were greeted with sideways rain, and a fresh cutting wind no longer sheltered by the lee side. At least this was the easy way I mused. 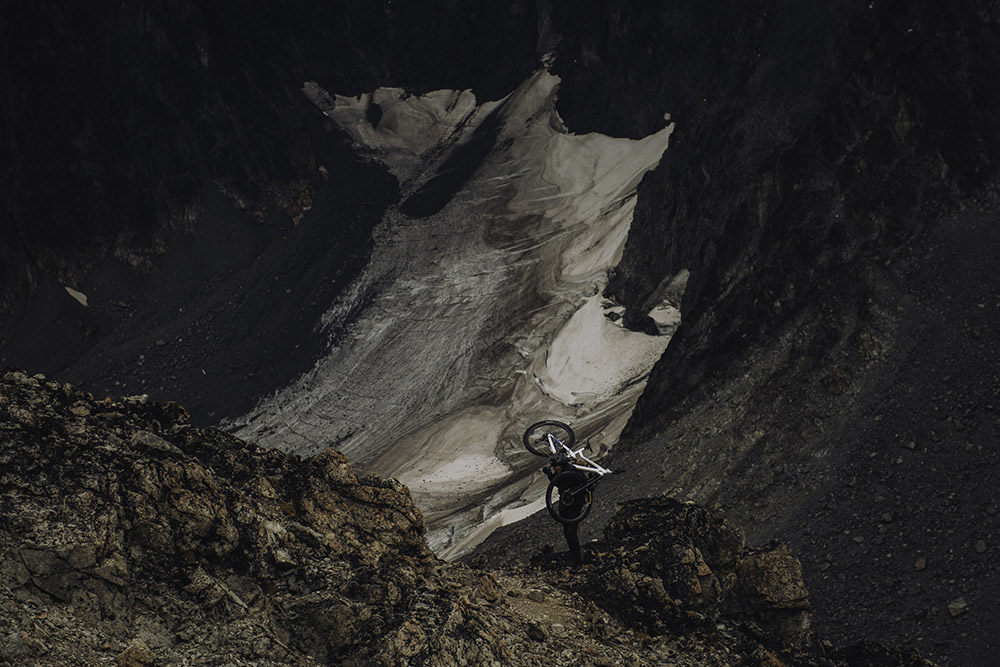 At the most reductionist, trips in the mountains either work out or they don’t, it's binary once you get down to it. While we didn’t know it yet – the four of us were still shivering in Fraser’s tent at ridgetop – this trip was about to work out. Waiting for us just outside the tent was a phenomenal descent into a valley framed wall to wall with chutes just begging to be lapped. I won't bore you with the details, but we set base camp up for two days and methodically ticked off each one right to left. The weather was beautiful, the dirt was tacky, even went for a few swims in the lake by our camp. Of course, the fireside yarns always worked their way back around to the Venus Fly Trap.

Granted, at that time we didn’t know the mellow 15 km “trail” back to the trucks was actually a 25 km overgrown mess of pain and frustration. Bush so thick we had to remove our pedals just to punch through. 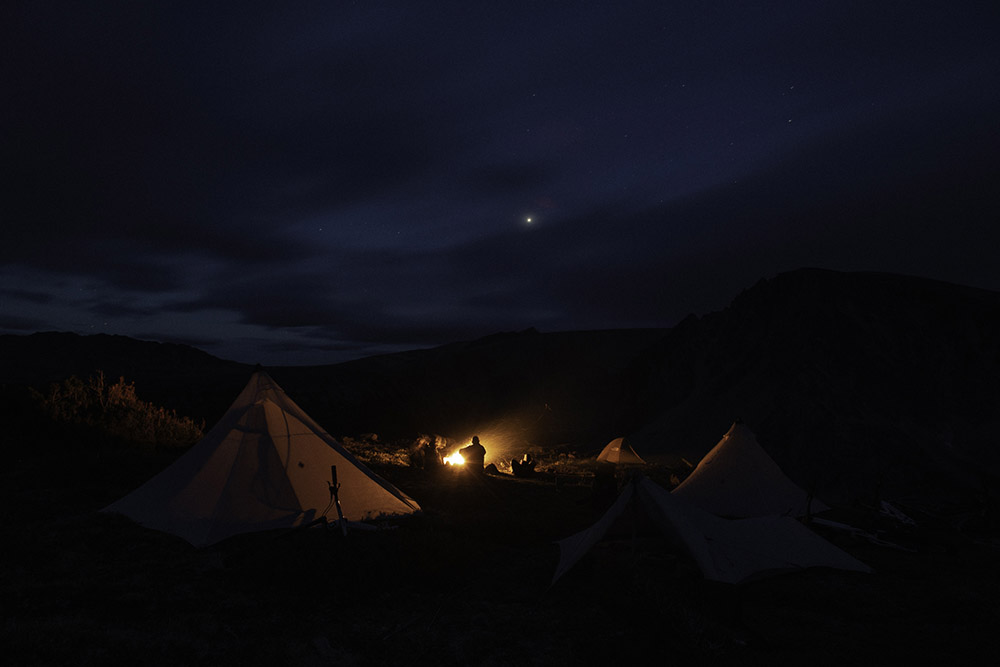 9 tips for getting into bikepacking

How to use Karoo 2 bike computer with Suunto