We spoke to the man at the forefront of the richest reefs in the world to find out how it all came about.  Max Ammer, founder of Papua Divers and two Raja Ampat Eco Resorts on one very special island talks reefs, wrecks and falling in love.

Last year Suunto took a group of competition winners out to Indonesia for the Suunto D5 photo shoot to produce inspirational content.  We had never explored these waters before and we soon saw the fruits of hard work.  It was to say, nothing less than inspiring and the story behind this special location is just as wonderful. 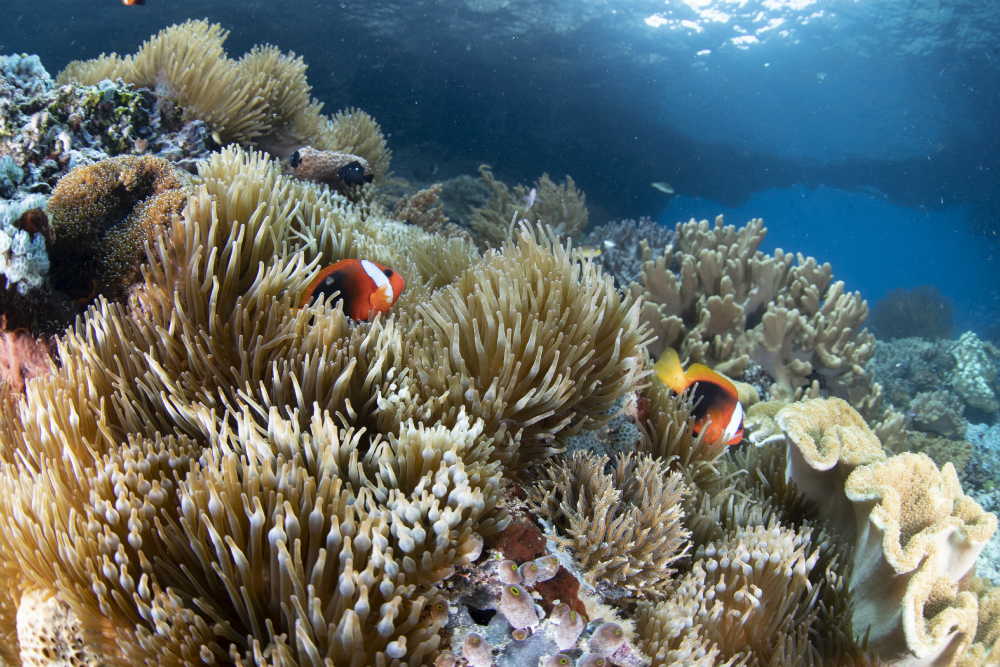 The Best Diving in the World?

A young fisherman stood at the edge of the water on West Papua next to his canoe.  Inside the canoe there were two turtles that he had caught on his morning excursion.   Max Ammer walked past the fisherman by the canoe and immediately his interests were sparked.  After a brief chat and small negotiation, the pair agreed a fair price for the sale of the turtles.

Once the money was exchanged, Max sprang into action and suddenly flipped the first turtle over the side of the canoe to which the fisherman promptly jumped in the shallow water after it.  In the splash and confusion Max then took his chance flipped the other turtle off the other side of the canoe back into the ocean and watched it happily swim away.  With the fisherman staring in awe at what was in his understanding a ludicrous occurrence, Max simply told the fisherman, “I like turtles”.

That same fisherman was soon to become the first dive guide at the five-star eco resort run by Max Ammer on Kri Island in a unique location where in an extraordinary case, the reefs are getting richer. 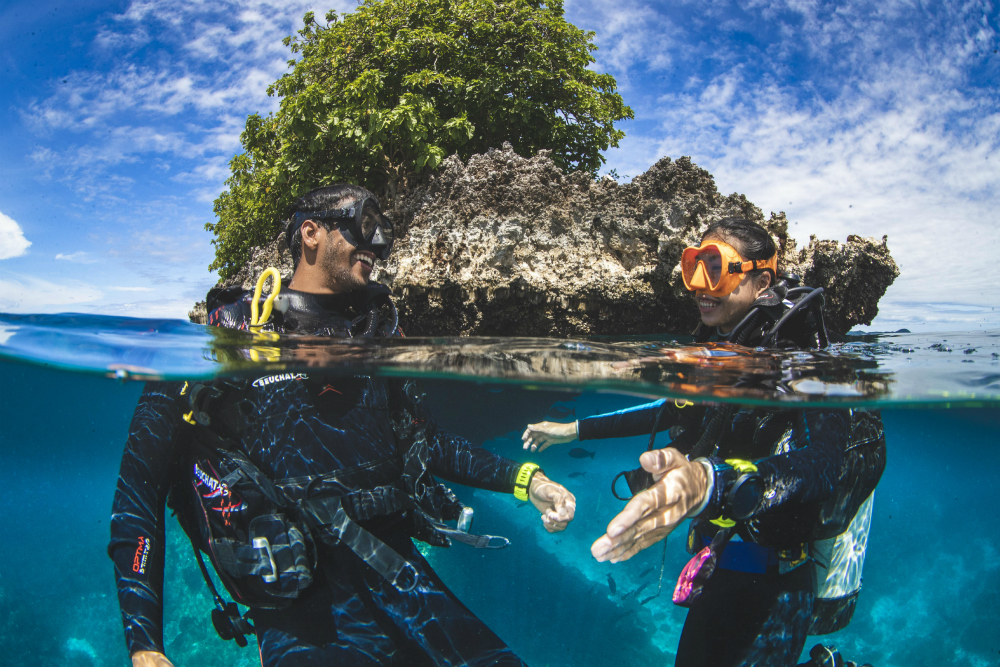 Max Ammer went to Papua after a long life of nature filled early years, growing up in Nigeria on an animal refugee camp run by his parents.  They nursed birds, crocodiles, chimpanzees to name but a few species back to health and released them into the wild if they could.  These formative years have certainly affected Max and led him on his quest for protecting nature.

Max learnt to dive while in the special forces in 1982 but it was not an enjoyable experience for him.

“I learnt not how to quit but how not to quit.”  Max talks of the key message he took home from his diving course.

Thirty years later and Max arrived in the pristine island paradise on Raja Ampat Islands, off West Papua in 1989 in search of wrecks and little else.  He had a tip off whilst living in the Netherlands that led him to pack his bags and head off around the world in search of sunken treasures.  The tip was from Max’s landlord who had been based in the Pacific at the end of the war and according to the story, he witnessed the Allied forces bulldozing aircrafts and Jeeps into the water.

At that time his job was building and restoring Harley Davidsons and classic bikes from the war so he was certainly interested.  On arrival at the remote island he found the jeeps with ease and began removing the data plates to sell to members of the Keep Them Rolling group of classic car collectors for approximately 250$ a piece.

“I found them. I still have a glove compartment form a WW2 jeep over there now.”  Max muses as he sits by the ocean beach front of the Eco resort in Papua.

He found the aircraft wrecks were slightly harder to find.  After an initial investigation of the area he thought it best to return with a zodiac, a Bauer compressor and some equipment to dive in and find them.  Morotai Island was the location of the Allied forces strategic base where 50,000 soldiers served under Supreme Commander for the West Pacific, General Douglas Macarthur.  There were about 500 aircraft take offs every day from the base as he island was a major base with it being just a short step over to the Philippines and Borneo.

In his search for the wrecks around Morotai Island Max formed friendships with the locals.  He opened up honest communications and he fell in love with their warmth.  He describes their nature as friendly and at some point, he thought he wanted to work with them, he wanted to build something great and he wanted to see change in the future. 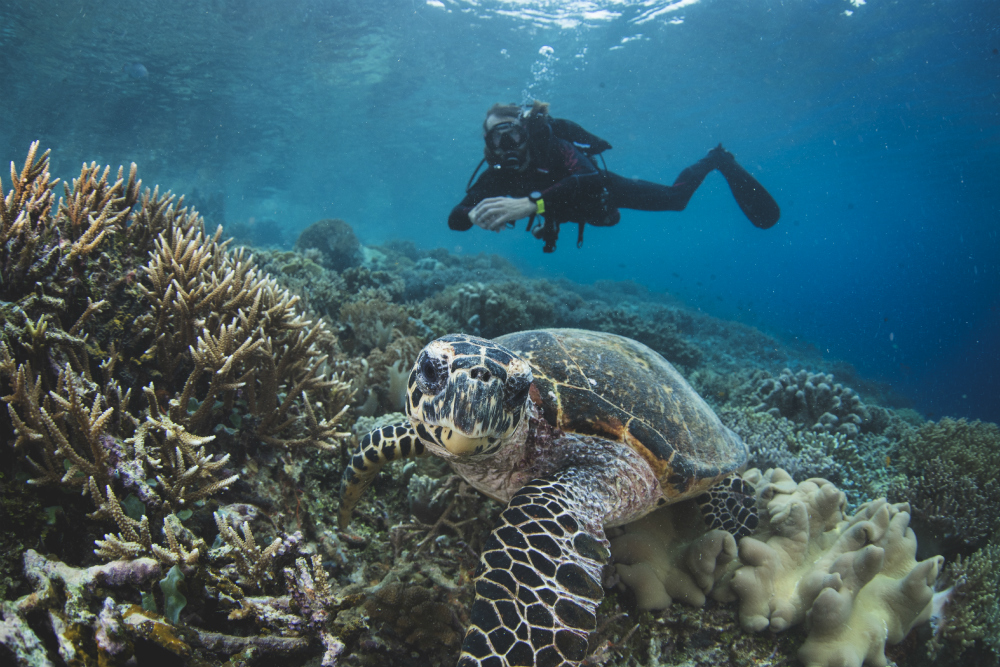 The idea of the eco resort idea came to light as it was the perfect balance of working with the locals and working with people while protecting nature.  Max took their ideas to a dive show with intention.  He designed an iconic stand never seen at a dive show before and filled it with plants and local artefacts to entice people to the yet unbuilt resort.  He decided that if he landed three sets of guests they would go ahead with the project plan; he sold two years’ worth of guests.

“I rushed back to the island and told the guys we have to build this thing the guests are coming!

Sometime later, lost in time, it was ready.  I was actually walking out the back door with the build team as the guests walked in the front!”  Max remembers fondly.

The locals lived a remote life and a lot of his team previously worked as loggers, fisherman, shark fin fisherman and poachers having had little or no access to education.

Now part of the crew, they have all ceased what they were doing and are serious about protecting the reef.  They earn more money, have security for their families and access to education while working on this unique reef system that is getting richer in fish species and corals.

Since the beginning Max and the team have put the protection of the burgeoning ecosystem at the forefront of their priorities.  This has proven to be a wise move as the fruits of the work can be seen in the thriving fish counts. 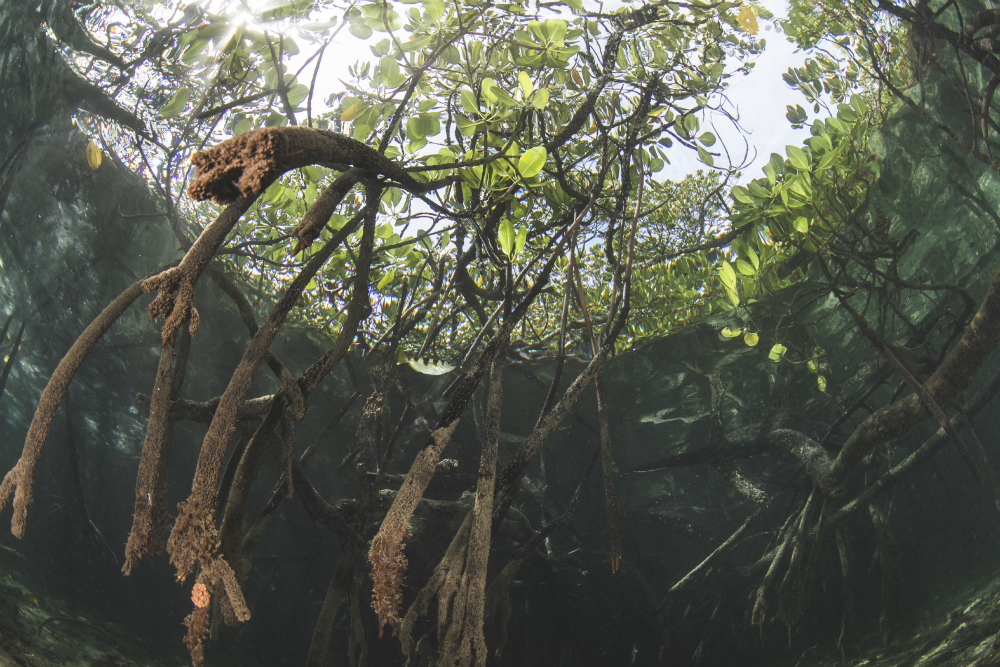 A group of scientists from Conservation International visited the eco resorts on Raja and conducted studies and counts documenting the numbers of fish and coral species along the house reefs.  They counted the largest amount of fish species in the world which led to National Geographic reporting on the resort which of course was fantastic exposure.

Twelve years later, scientist Gerry Allan returned to do another count and found that there had been an increase of 91 species in the same area totalling 374 species of fish on one dive, making it the richest area in the world.

Max puts this down to beginning the protection before the reef had been destroyed unlike many other marine protected zones.  They are not wasting energy trying to revive an ecosystem that has already been destroyed, they are building on a top of a flourishing base and these hardy coral polyps seem able endure a larger fluctuation of sea temperatures than other species so are being transported around the word to be implanted and successfully grown in other systems.

“Scientists are looking to see if it will be possible to transplant our corals from our home to other areas where they are not surviving.  We are not sure but people are researching this possibility. Perhaps our corals are more evolved, stronger, but I can’t really answer that yet.”  Says Max.

The diverse variety of natural schemes in Raja around the two resorts include bay areas and swamps amongst the lush swarms of vegetation.  The water is warm and the equatorial location has constant access to nutrient rich waters bringing in a healthy supply of food to support the great wealth of nature that relies on this orchestra of occurrence.

There are of course stresses on the environment, including those caused by running two resorts on the wild and remote island but Max sees it is all about balance in this situation.

“There are always stress on environment.  What we tried to do at the resort is plan how we can help educate people for the future.

We also work with the government, but they do not do enough, they should be more involved in our opinion, and we try to work with them and educate them, then hopefully there can be encouraged to be more proactive and initiate change.”

As it stands Raja is able to handle more tourism but the expansion must be on the right terms and make the least footprint.

Regimented planning and organisation will be the key to successful growth including processes such as strict waste management schemes, green energy generation and protection of nature in the area will have a positive influence.  Educating guests on their own environmental impacts as visitors is an important part of the eco experience.  Beginning with using eco-friendly sunscreen that will encourage better behaviours that they can take home with them and spread the word amongst peers.  The resorts are aided in their plight of protection by a constant stream of researchers including overseas students that come and study the area and collaborate with the ground team.

Environmental dangers are changing across Papua, including increased plastic pollution being a serious risk to the natural environment.  The ground team are more than aware that they should be considerate and careful and encourage guests and visitors to adopt the same attitudes while sharing knowledge and ideas and working together so they can grow and concentrate on creating a wonderful future for the local area, its inhabitants and beyond.

“We hope in September to welcome five students to conduct their own research and look at different aspects of the issues we are facing here to help towards making things better and better for the future.”  Max continues with an excited tone, “we love working with Conservation International and we are blessed to have this opportunity to work alongside them.” 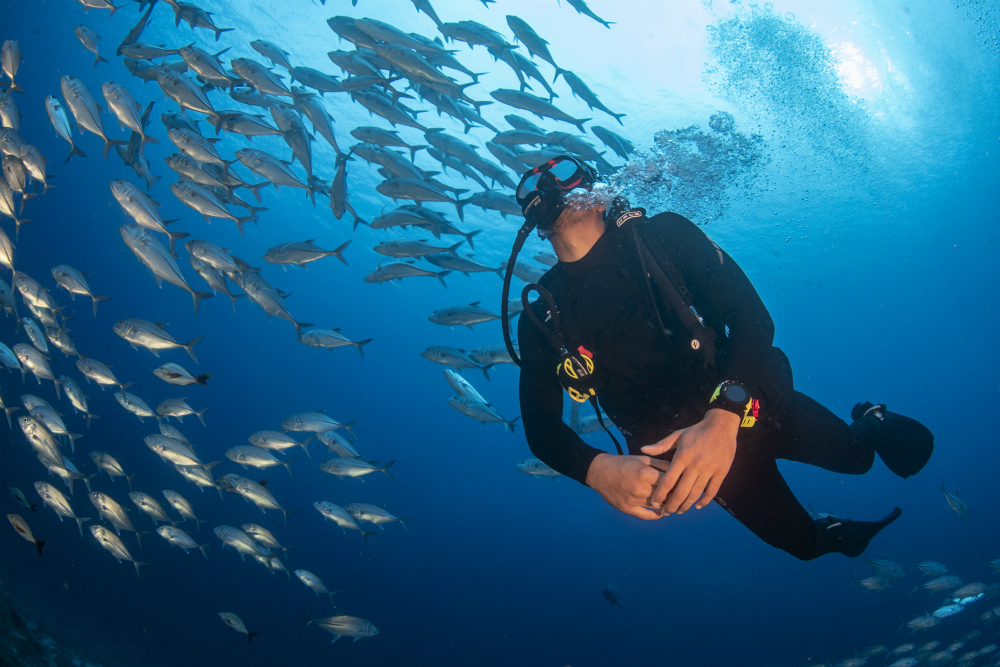 Flying High for the Future

There is one surprising element of this conservation project that is somewhat unexpected, their collection of Bell 47 helicopters hidden inside a huge hanger just behind the beach that houses enough spare parts to build a further three helicopters.  Max built the machines himself and the advantage is they are easy to maintain.  They are the best auto rotator helicopters that keeps the weight in the tips of the blades allowing them to land and take off if they unfortunately fail.  Max Ammer is interested in aviation and they serve as a useful tool in protecting the local area.  Illegal loggers, fishermen and general rogue behaviours are easily spotted from above.

The passengers and captain can even see the dive sites from the air, flying over the water they can view corals, the aggregation of fish and whereabout they gather on the dive site.  Best of all, they can see the large animals.  Max talks of his record sightings, 132 manta rays on one flight and 33 dugongs on another.

“You owe it to yourself to be positive.  Negativity is no good, be positive and look at all the things many things you can do at least you did the right thing.  If you going to be negative it’s not going to do you any good.” Max Ammer, Raja Ampat Eco Resort and Papua Diving.

You can see them diving in our D5 images and videos and will also hear some of their comments from the trip during the next few weeks so stay tuned.