Running from Chicago to New York for peace

Running from Chicago to New York for peace

Earlier this year he ran from California to Boston, now the “real Forrest Gump” Patrick Sweeney is back at it again, running from Chicago to New York. This time it’s for peace.

The two are running all the way from Chicago across four states and 1368 km to New York City where they will end their journey by running in the New York Marathon on November 1.

Patrick (left) and Alex holding the 'torch of humanity'

Since starting out, they’ve covered more than 1100 km and have a short distance to go. They’ve been doing about 72 km a day – and in minimalist running shoes. Aside from a few aches and pains, their bodies are holding up and they’re having a blast.

They are both seasoned ultramarathoners. Running mind boggling distances isn’t a chore to them, it’s a way of life.

“Everything is just coming together in a magical way,” Patrick says. “A lot of the course has been quite beautiful and remarkably amazing.” 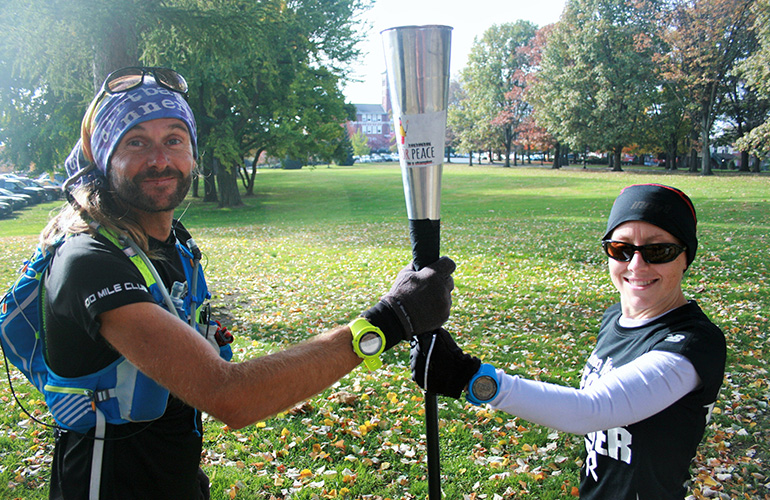 As they’ve run, they’ve taken turns carrying the ‘torch of humanity’. The torch is a symbol for the Champions Walk for Peace, an international effort to raise USD$250,000 to build a peace education school in Kenya’s North Rift Valley where ethic violence and inter-communal conflict has resulted in 600 deaths and 435,000 displaced people in 2014 alone, according to reports from the UN.

Organized by genocide prevention NGO Aegis Trust, the torch began its journey in July from the North Rift Valley – the Cradle of Civilization – in the hands of Kenyan running stars who carried it northward. In the second leg, British runners carried the torch 3540 km across the UK to London.

Now Patrick and Alex are on route to the New York Marathon where they will return it to the Kenyan runners who first began its journey.

“It’s a cause we are grateful to champion,” Patrick says “Nobody should have to live their life in fear.

“The school in Kenya will help educate people about their differences so they can work together and create peace.”

Read about Patrick’s previous run across the USA 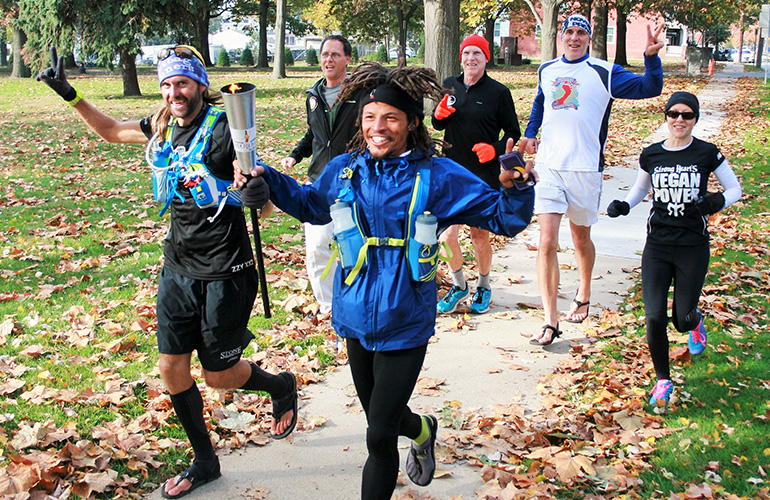 Many supporters and runners have come out to join them on the road. Author of the famous book Born to Run Christopher McDougall invited them to sleep at his house for the night and joined them on the road.

The tricky things have been finding vegan food and negotiating dangerous roads.

“I’m poor and vegan so my food options are not that plentiful,” Patrick says. “In the mornings I usually eat a few energy bars and a peanut butter sandwich for lunch and for dinner it’s almost always an avocado sandwich with pickle chips and a cold beer whenever I can find one.”