Last summer ski mountaineer Greg Hill did a carbon footprint test, and the results terrified him. He decided to take action. Read on and watch Greg's video to learn more.

As a professional adventurer, I constantly search far and wide for new challenges and new spots to explore. My happiness, my inspiration… essentially everything that fulfills me comes from nature. But looking at how I access these adventures, it’s clear: I am killing the world as it stimulates me.

Not only was I well beyond the sustainable level, there was more that the test could not calculate. The heli-guiding, the snowmobile I used for access – these were not added to the thousands of kilometers driven in my F-350, or the multiple intercontinental flights. The truth was obvious: I needed to change my ways.

Immediately I decided to try something suggested by my brother Graham at his TED talk. I became a weekday vegetarian and got my family to join me. (It is amazing to think how much of an impact the global meat industry has!) A simple but very effective change. But for me, with my globe-trotting adventures, I really needed to look into my travel.

So I quit heli-ski guiding, sold my giant diesel truck, let my snowmobile rust and looked at different ways to get to the trailhead.

We are constantly reading about electric vehicles being the future – but I was skeptical. EVs have historically had a limited range ­– which makes them ideal commuter vehicles for urbanites – but useless for someone where I live.

Revelstoke is a small mountain town, deep in the Canadian mountains, 250–400km from major cities. With cold winters and deep snow there are many very valid reasons to be scared of converting to electric. The sacrifices I needed to make seem daunting ­– but perhaps they are not as big as they seem.

So we had to test it out. My friend Chris Rubens and I went on an electric adventure. Our goal: live our normal adventurous lifestyle while being more sustainable getting from spot to spot. 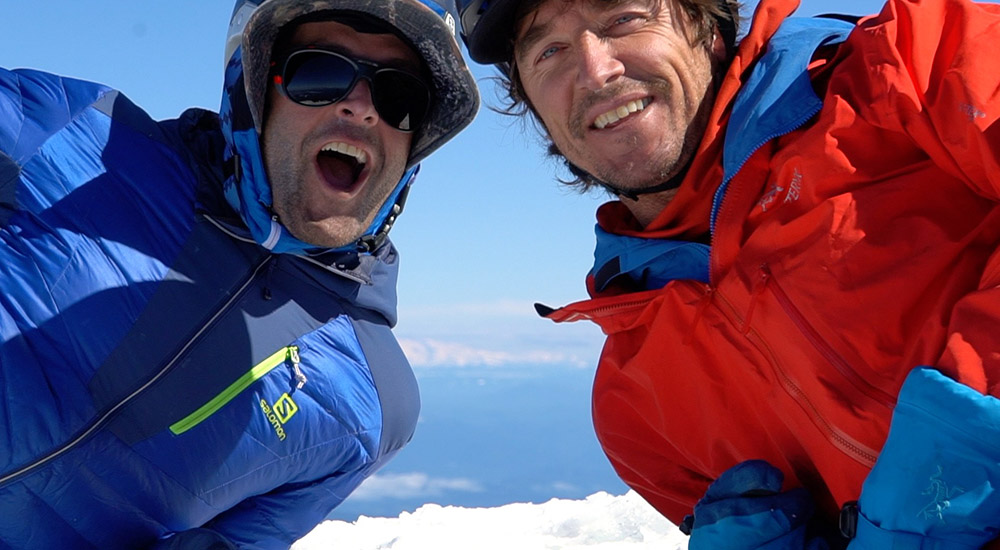 Chris and Greg on their electric volcano adventure.

I rented a Nissan Leaf from Ecomoto in Vancouver – a commuter vehicle with 100 miles of range. Far from ideal – but if we could drive down the West coast of the USA, climb and ski a bunch of volcanoes and make it back, we could prove to ourselves that electric access is the future.

So first, we met up and climbed and skied Mt Baker, then began our true road trip down south. An app called “Plug and Share” would guide us to all the level 3 chargers, which take around 40 minutes to fully charge the car.  This trip was admittedly ideal, since the I-5 corridor that goes south down to Washington, Oregon and into California is littered with these chargers.

It’s not to say we didn’t face challenges. The trailhead for Mt Rainier is quite far inland and well away from any Level 3 chargers. But our app showed us a Level 2 charger that someone had set up at their house for their Tesla. We arrived at the park boundary and started charging at Phil’s personal plug. The percentage slowly moved upwards. We had to hastily leave with barely 70% as the park’s gates were closing. Committed, we drove upwards. As we climbed up to the trailhead our % dropped and dropped. 40%...35% and then finally at 31% we made it. We parked and decided to deal with it when we returned. 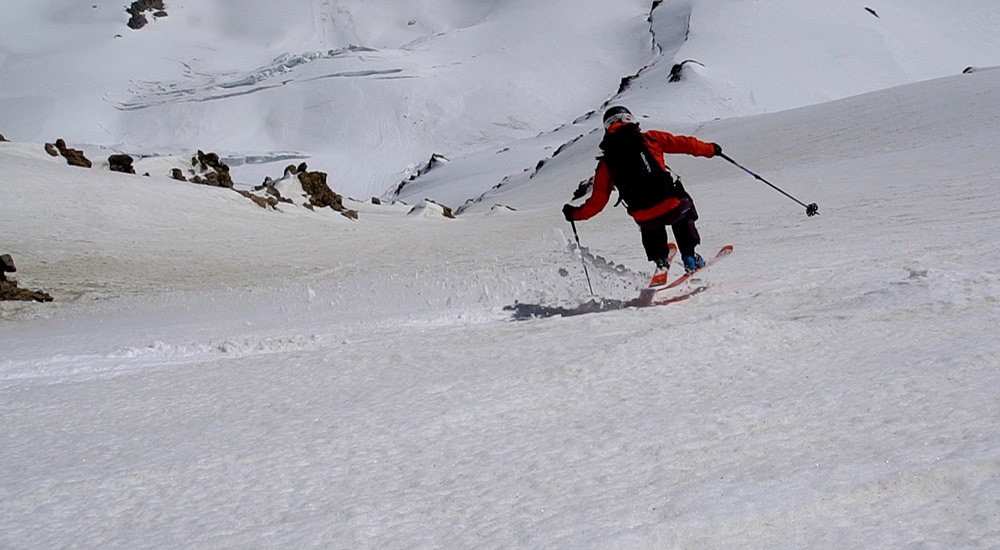 Greg charging down a sun-baked volcano.

A great couple of days had us on the 14,400-foot summit and then skiing down a heavily crevassed, but super awesome run. Arriving back at the car we wondered if our first mistake was going to haunt us. Luckily the Leaf has a ‘B” mode which allows the car to slow itself using the engine, putting electricity back into the motor. So as we drove down 5500 feet we brought our charge back up to 50%. A few hours at Phil’s charger and we were off. Yeehaw! Maybe this is going to work!

Mt Hood was our next objective – and there were Level 3 chargers right up to the trailhead. A great summit and silly ski had us driving south.  Eventually the ease of charging had us pushing the battery percentage as low as we could go, extending each drive till the % disappeared and the ‘KMs left’ blinked out. We realized there was always extra battery left, and we pushed it many times. Never fully running out of gas – or rather, juice. 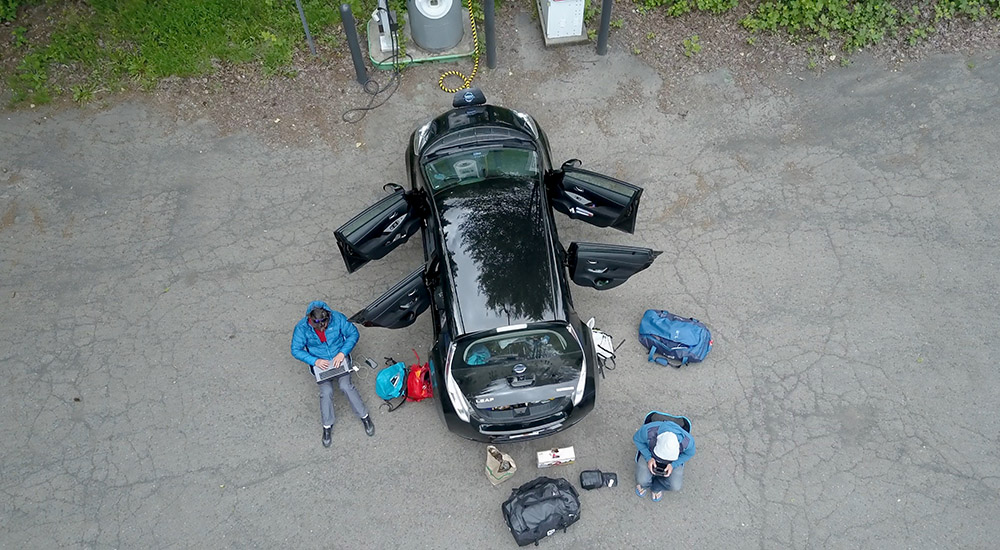 Charging, charging... to make it to yet another mountain.

We made it as far south as Mt Shasta in California, where there were less Level 3 chargers and we ended up charging up at RV campgrounds – Level 2 chargers that would take 3-5 hours to fully charge. A couple oddball Canadians, camped amongst the behemoth RVs.

While we drove back north, hitting Mt Adams on the way we pondered our experiment. We ended up traveling almost 5000km, climbed and skied six volcanoes, went rock-climbing five times, had amazing adventures and camped in great places. Essentially: our normal lives, with one major difference. We used one liter of gas during the whole trip: for our cookstove.

Not being able to move quickly between objectives made us more relaxed. Forced stops every few hours had us re-thinking our Type A personalities. To me electric vehicles are the future, especially since climate change would affect our jobs so badly.

My lesson has been learned. Since returning from this trip I have bought an electric Chevrolet Bolt and have fully jumped into the electric vehicle movement. I have dreams of summiting 100 mountains and creating minimal emissions while doing so. It’s a challenge I am calling ‘electric adventures.’ I am 14 summits in, and I have run to some, climbed up others, and skied off those volcanoes. It is a great start and it feels so amazing to be part of the solution to our climate crisis. I will never be perfect – but I can search out ways to be better.

Press play and follow along on an Electric Adventure

Previous
Lucy Bartholomew on how to almost quit... then not
Next
Is the ultimate cross-training… breathing? Mike Maric teaches athletes to breath better