On a dark, stormy December night in 1944 a fleet of five German warships was cruising the labyrinthine waters of the Gulf of Finland. Due to navigation error two of the ships ran into their own German minefield between Porkkala and Naissaari and were lost.

Badewanne, a Finnish, non-profit organization representing a group of voluntary divers that have been documenting shipwrecks in the Gulf of Finland for more than 15 years, recently dove down to one of the destroyers, the Z36. Juha Flinkman, one of the Badewanne divers, gives us a guided tour: 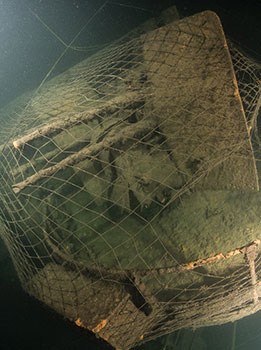 “Diving to the wreck of Zerstörer (Destroyer) Z36 is a unique and eerie experience. As you glide down the shotline into the darkness, the beam of your light first picks up a scary mess of mast, radar aerials and – trawl, lots of it! Carefully avoiding the trawl you descend towards the superstructure past a quadruple 20 mm flak gun wrapped in netting, barrels sticking through the mesh.

Passing over the port side of the bridge wing, you suddenly stare at the muzzles of a twin 20 mm Flak gun mounted on the fo’csle deck. The barrels vainly aim at the unreachable sky far above. This flak gun is situated a little aft of “Bertha Geschütz”, that is B-gun of the main armament of 127 mm guns. These Mob 36b type destroyers weren’t supposed to have any such armament here, but what the heck, maybe the Skipper just wanted some extra anti-aircraft hardware installed!

Later, swimming from the gracefully arching bows towards midships, your lights pick up mighty Rheinmetall-Borsig barrels of Anton and Bertha Geschütze still defiantly pointing forwards, but never to be fired again. Even the riflings inside the barrels are clearly visible.

Even when diving in the clear parts of the wreck, the ever-present trawl netting looms, if not in your vision, then in your mind. You must always be aware of this danger – there is no room for carelessness.

This wreck is very big. It was distinctly once a very powerful warship, but now lays with her back broken on the seafloor, wrapped in trawl, and her payload of death strewn all around. A dark and a lonely place.”