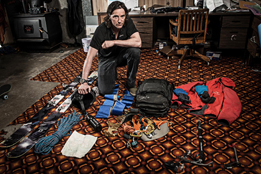 It's begun! If Google Earth were live, right now you'd be able to zero in on a guy cranking the kilometers up-hill in a remote corner of British Columbia, Canada. His name, appropriately, is Greg Hill. His mission: to clock 100,000m of vertical ascent in one month. He set off on Saturday, March 1st.

Shortly before beginning his latest adventure, Greg told us he was as ready as he'll ever be.
“It is more a mental get-ready than a physical one right now. Training for those big consecutive days has been over many years. This season I have toured 50 days, some big ones up to 4,000m - mostly just relaxing before I go hard,” he jokes.

The plan will begin with him setting off 'gently' on an ascent of a local peak in which he might be joined on the summit by some close members of his team — his seven and eight your old son and daughter.

“They are psyched to summit their first peak,” he says. Conditions were not looking so favorable for the beginning of the month, with high avalanche risks forecast.

“Terrain choices are going to be key,” says Greg. That and staying injury free.
“The goal will be big and hard, the biggest challenge being my [38-year-old] body. But I have been stretching a lot, getting things loosened before the big adventure begins.”

To follow Greg's progress, stay tuned to our Facebook page. You can also track his progress and see his routes on Movescount.