After a very complicated and challenging year, this was perhaps one of Suunto’s most special editions of World Vertical Week. The results show how much athletes from every corner of the globe want to push themselves in the outdoors – the number of participants more than tripled to over 48,000 athletes joining the challenge in search of vertical glory this year.

Austria has done it again: it’s the country with the highest average climb per activity, 421 m. The country of music and mountains has again retained the position that it’s accustomed to, number one, which it has held in four of the last five years. It only lost its crown in 2019, falling to fifth place. Austria is followed by Slovenia (2nd, 401 m), Italy (3rd, 378 m), Switzerland (4th, 348 m), and France (5th, 292 m). These nations have regularly featured in the World Vertical Week top 10. Special mention goes to Hong Kong athletes, with their 254 m average, taking eighth place. 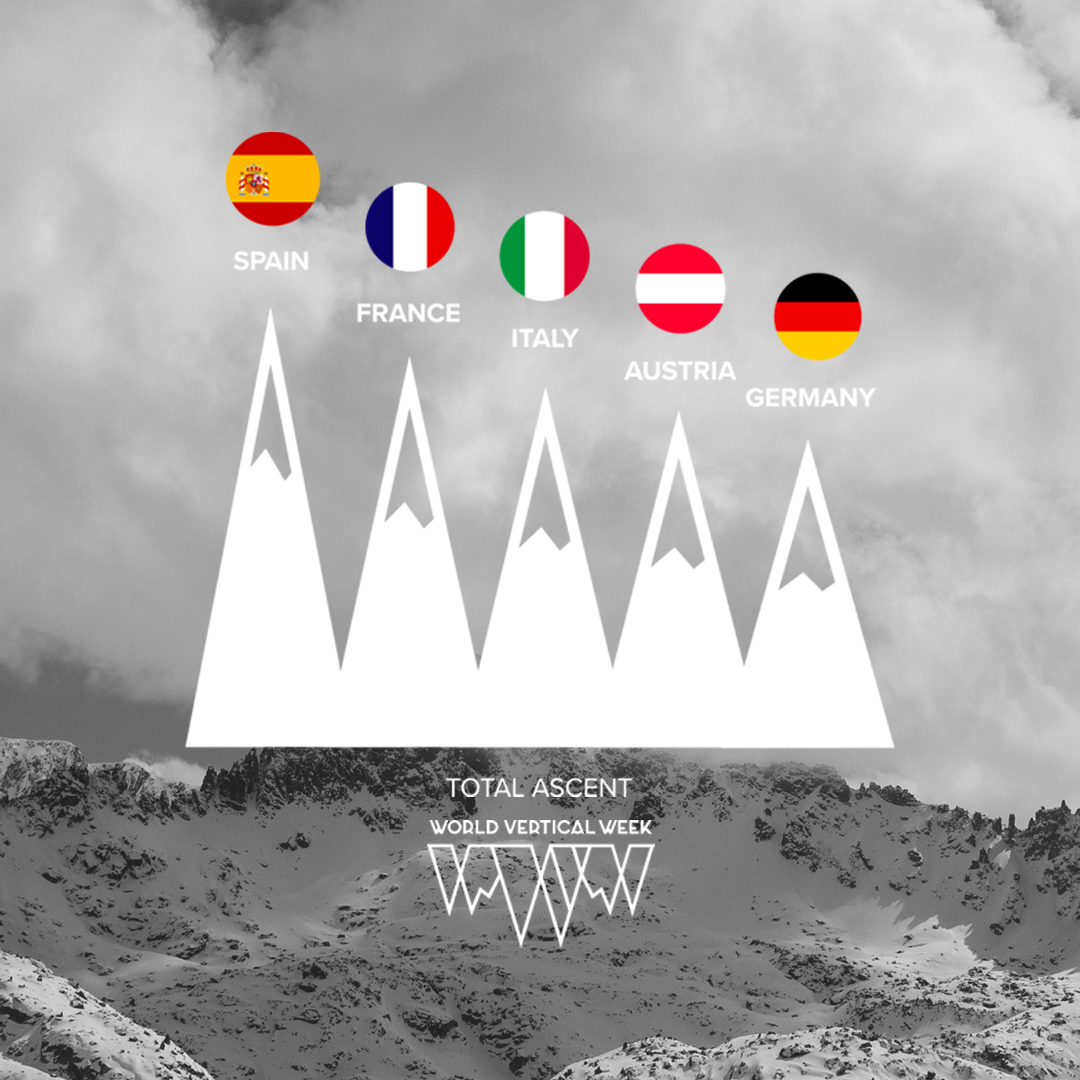 Add, add, add. Based on many diverse efforts, Spanish athletes made Spain the nation with the most climbed meters overall. Spain has snatched back the title, which landed in French hands last year. Italy comes in as third again. Suunto has been providing total data by country for three years, and these three countries have had a place on the podium each time. 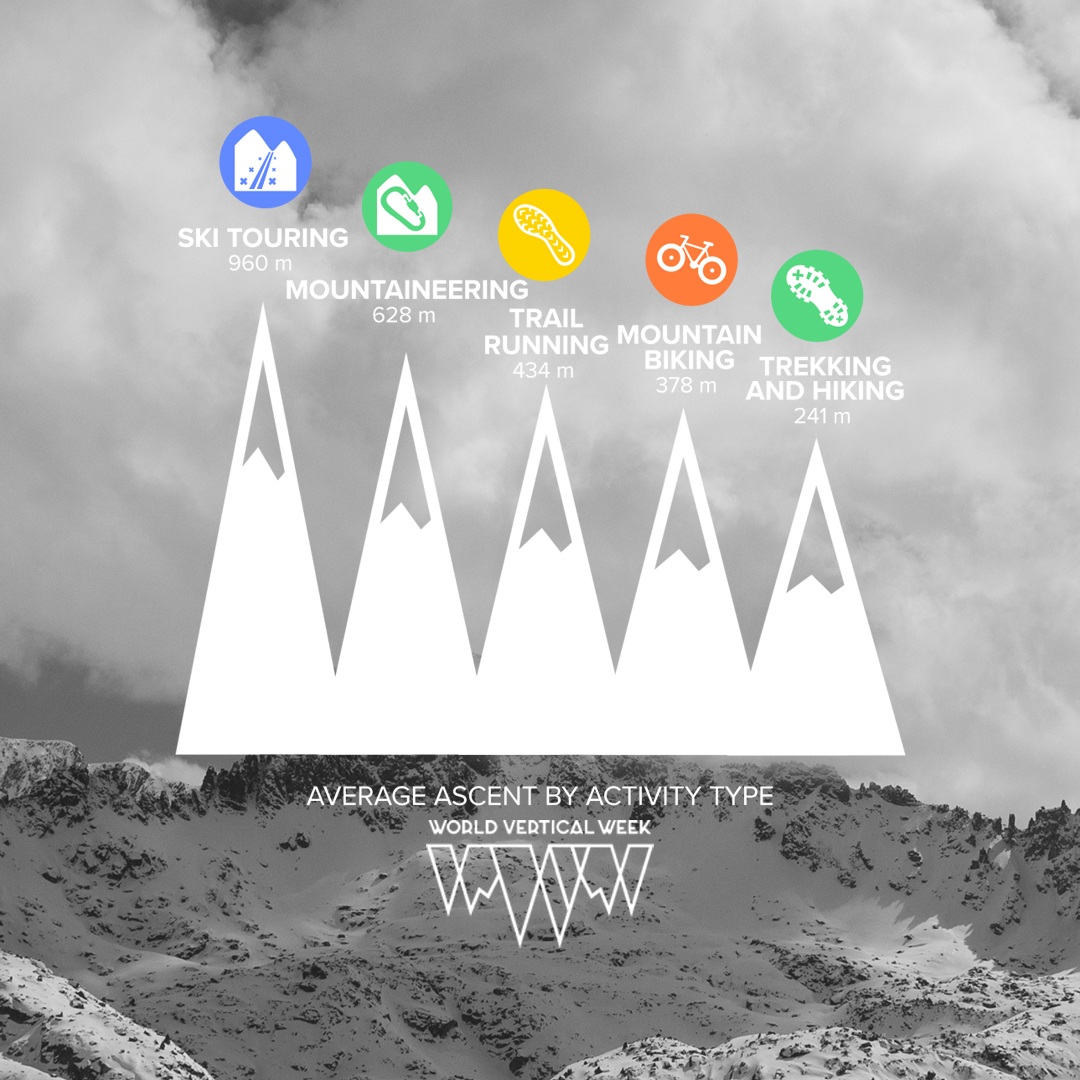 Once again, ski touring looms large as the sport with the most vertical meters clocked: up to 960 m on average per activity. And its companions also repeated on the podium: mountaineering (628 m) and trail running (434 m). The average accumulated climb in each sport increases year after year, but these three disciplines remain top dogs.

Each year, Suunto World Vertical Week generates unique stories of athletes who go above and beyond, surprising and inspiring the entire community. This time, the efforts of nine athletes stands out. Faced with an invitation to tally vertical meters, they managed to accumulate more than 10,000 meters in one week. That’s brutal!

The transalpine country is ranked in third place for collecting the most average and overall vertical climb meters, and in addition it leads the mountain biking ranking and is among the top three countries in three more categories: ski touring, mountaineering and cycling. Italy is present in six of the seven classifications by discipline. Bravo!

Over 1,000 meters on average? Why not? The first four countries in the ranking, Germany, Italy, Switzerland and Austria, are all above the 1000 meter mark this year. The ranking offers surprises and changes compared to 2020, perhaps due to the constraints and limitations arising from the pandemic. Germany deserves special mention; last year it didn't make the top 5 and in 2021 it is on top! Spain, on the other hand, was first in 2020, but has disappeared from the 2021 top 10.

For years, Japan and Hong Kong have reflected the passion trail running inspires in Asia: they captured the top positions here once again, accompanied this time by Slovenia.

Switzerland returns to the top five and comes out on top, showing that it is passionate about seeing the world from way up high. It is accompanied by Italy, France, Germany and Austria... forming a classification dominated by Central Europe, the territory of the Alps and high mountains.

Italy is synonymous with variety, but according to data from the Suunto World Vertical Week it tallied the most vertical meters of all on two wheels. There are few changes from 2020, with the main one being that Slovenia has entered the top 5.

Thai athletes racked up the most vertical meters in trail running last year. This time, it would seem they have chosen to continue, only at a different pace.

It seems like climbing mountain passes by road bike in Portugal is close to becoming a tradition. The country won top position once again, and Colombia returns to the ranking after last year’s absence.

Traditionally this is one of the closest categories, with just a few meters of difference separating countries. This time Slovenia, which regained the top position that it had back in 2018, has pulled away a little.

Thank you to everyone for participating in Suunto World Vertical Week 2021. We’ll be back with another edition of Vertical Week!