This is the full, incredible story of how Finnish diving group Badewanne discovered the wreck of first world war German submarine U 26. In their own words, the group's Juha Flinkman tells the story:

Late May in Gulf of Finland, weather is perfect with slight seas and some overcast, but good visibility. We’re kitting up to dive in one of the Europe’s busiest sea lanes. Ships of all sizes and shapes steam buy westbound along the lane leading out of the Gulf to the Baltic Proper. And where we’re diving is right at the bend, where every skipper wants to cut the corner as close as possible to save time and precious fuel. Subsequently, with the kind help of Helsinki Traffic Control, we have received a special permit to dive the site. Traffic control directs all ships approaching the site to pass us, and informs them of our intentions. Hence the VHF is constantly blaring instructions to approaching traffic, approximately one ship every 10 minutes!

What lies on the seabed that could be so worthwhile to dive to, that would warrant such grandiose operation? Well no other than U 26, one of the first “Ace” boats in the First World War, and certainly the most successful submarine operating in the Baltic during the entire conflict. The U 26, under command of Kapitänleutnant Egewolff Freiherr von Berckheim, sank Imperial Russian Navy armored cruiser Pallada in October 1914, during the first months of the war. This made von Berckheim one of the first “Aces” of the emerging Ubootswaffe branch in the Kaiser Navy. 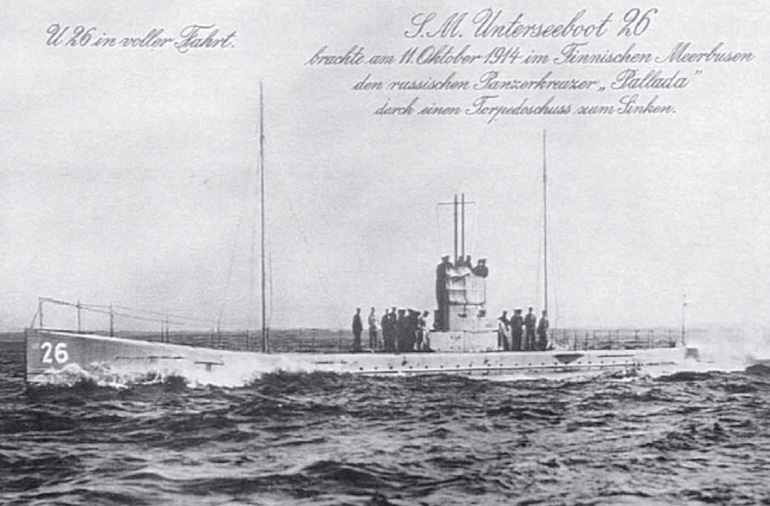 Von Berckheim and his entire crew received the Iron Cross from the enthusiastic Kaiser for their efforts, and in late summer 1915 they returned to Gulf of Finland with their trusty mount U 26, to wreak havoc among Russian shipping. This they did with good success, until late in August the luck that carried them through their dashing exploits ran out. Russian Navy had for a long time been very annoyed with the success of German U boats in the Gulf, and in order to stop this, had ordered minelayer Ladoga to lay a barrage across the mouth of the Gulf. However, U 26 was already inside the barrage, trying to get back to its base after a successful patrol. What happened, and when, we will never know, but U 26 hit one of Ladoga’s mines and sank with all 30 hands.

A couple of weeks earlier, while running a side scan sonar sweep along the line of barrage laid by Ladoga, Immi Wallin observed a submarine wreck forming on the screen. Subsequent sweeps revealed that the boat is old, and most probably German, so the practical possibilities were U 10 or U 26. Soon we would find out!

JJ-CCR’s strapped to our backs, bailouts and deco tanks snapped to place, fins on. Immi manouvers Yoldia right by the buoy and we go over the side. The water is rather clear even on the surface, but whatever waits at the bottom we have no idea. However, now as we descend the shotline it gets clearer and clearer as our lights probe the darkness. And suddenly she’s there! Visibility is absolutely brilliant all the way to bottom, which seems to be glacial clay. The shot weight hasn’t touched the wreck, but lies almost two meters to the side. Closer inspection reveals that the sediment is saturated with oil that has seeped from U 26’s tanks during her 99 years stay at the seabed. We swim towards the stern, which has sank deep into sediment as we could already see from side scan images. 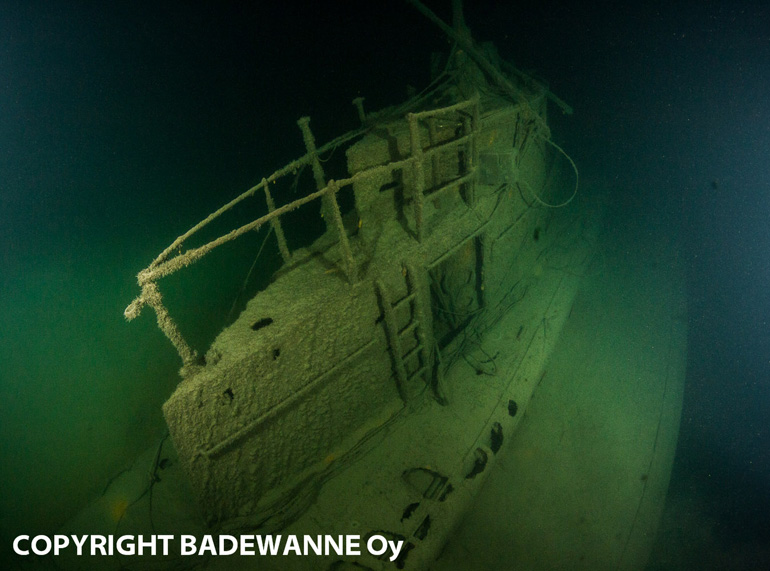 The deck casing is visible maybe 10 meters behind the conning tower before disappearing into the clay. Broad, flat-topped saddle tanks typical to the U-23 class appear from the clay and run along the sides of the hull. On top of starboard side tanks we can see the collapsible radio aereal masts with their raising/lowering mechanisms. There is some trawl wrapped around the bows and conning tower, and only apparent damage to the boat seems to have come from the trawl: conning tower railings have been twisted and ripped off, and the ship's wheel which has stood on the open bridge, has been torn away by the trawl, and by an insane twist of fate has ended up in a space behind a ripped off hatch on the starboard side of the conning tower. There the wheel rests, still wrapped in trawl netting. Most importantly, the conning tower layout is definitely class U-23, so it seems we really are looking at U 26. But we need to check further.

As we approach the bows, we can clearly see the for’ard diving planes, which are distinctly located low on the hull, well below water line when surfaced. This detail excludes U 10, which has these diving planes located above waterline. Everything else also matches what we know of the U 26: torpedo tubes, their outer hatches, bow shape.

We can now be sure we’re looking at the elusive U 26, one of the most sought after wrecks in the Baltic. Here she is, resting on the seabed with her crew and Kaleu’nt von Berckheim. An even 100 years after she was commissioned to the Kaiser Fleet, and 99 years after she last reported in.  I have heard somewhere that old submariners don’t consider the boats that never returned from patrol as “lost”, but refer to them as “still on patrol”.  Well, here she is, resting on the Gulf seabed, proud and alone as she was when she still patrolled these waters. A touching memorial to fates of war: brief success followed by swift and inevitable death. We swim silently along the side towards our shotline, our RB’s not breaking the silence of almost a century.

As we can now be sure we have the U 26, we call the dive at runtime minute 17, and start our ascent along the shotline. Deco stops tick by, and eventually we surface. Yoldia is ready and picks us up quickly. It’s only after we are seated, and remove the loop from our mouths, that the whooping starts. Yes, it’s the twenty-six! And yes, the viz is bloody excellent! As the whoops echo around the deck of Yoldia, the next crew is preparing to dive, this time to shoot video. We quickly brief them with Jouni, and then they disappear over the side. Well folks, just another day at the Gulf of Finland, the Definite Wreck Paradise of the World.