Dive Odyssey is an ode to thousands of years of mystical underwater experiences.

An explorer alone in a frozen landscape breaks into the ice and descends into a vast, alien underwater world with no light besides what she carries. The eerie atmosphere, the unknown behind the curtain of darkness, the presence of another, all create tension in this film praised as a cinematic masterpiece.

Initially released in 2018, Dive Odyssey, by Finnish filmmaker Janne Kasperi Suhonen, is the story of an explorer and an aquanaut meeting in a mystical underwater labyrinth, hidden from the world by deep snow and frozen ground.

“I often make the analogy between technical diving and space,” says underwater explorer Andy Torbet, who plays the enigmatic aquanaut in the film. “The cold, the darkness, the psychology and the total reliance on your equipment to survive. But more than that you are entering the most alien, other-worldly place in our planet. And if you needed any convincing the aquatic world is one of alien wonder this film does just that.” 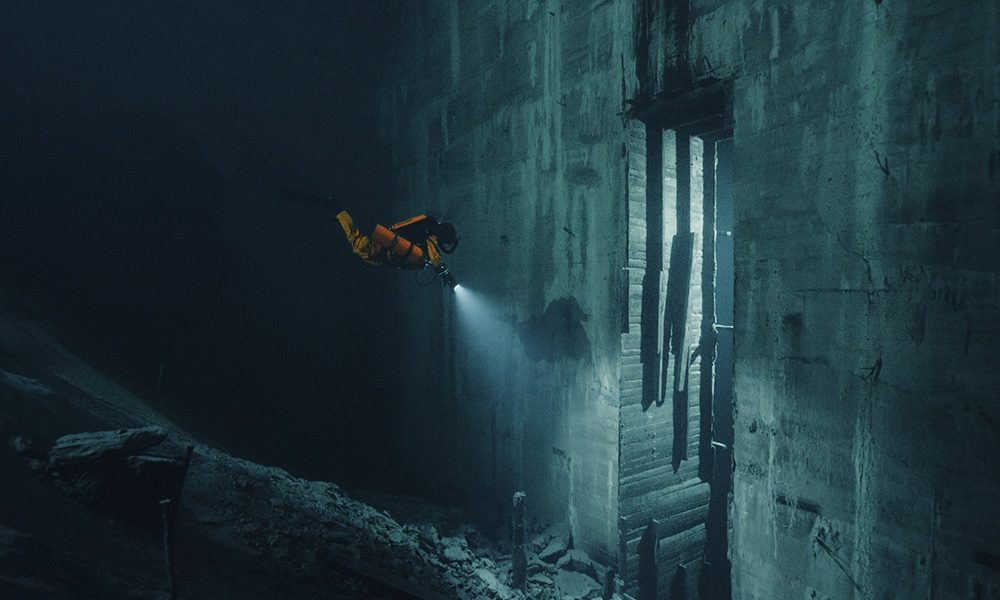 The film was shot in the old and long abandoned Ojamo limestone mine near the city of Lohja, 60 km from Helsinki. It’s now a modern day diver’s paradise with many kilometers of tunnels to explore, all starting at a depth of 28 m, and descending to 250 m.

The main character in the film, the mysterious orange clad explorer, is played by technical and cave dive Gemma Smith. Shooting the film was no glamourous Hollywood acting gig.

“As we all know roses grow out of the dirt and in this case, the dirt was the hardest diving I have ever done,” she says. “I am so proud of this project that when I am 90 years old, I will still look back on these dives and be impressed.” 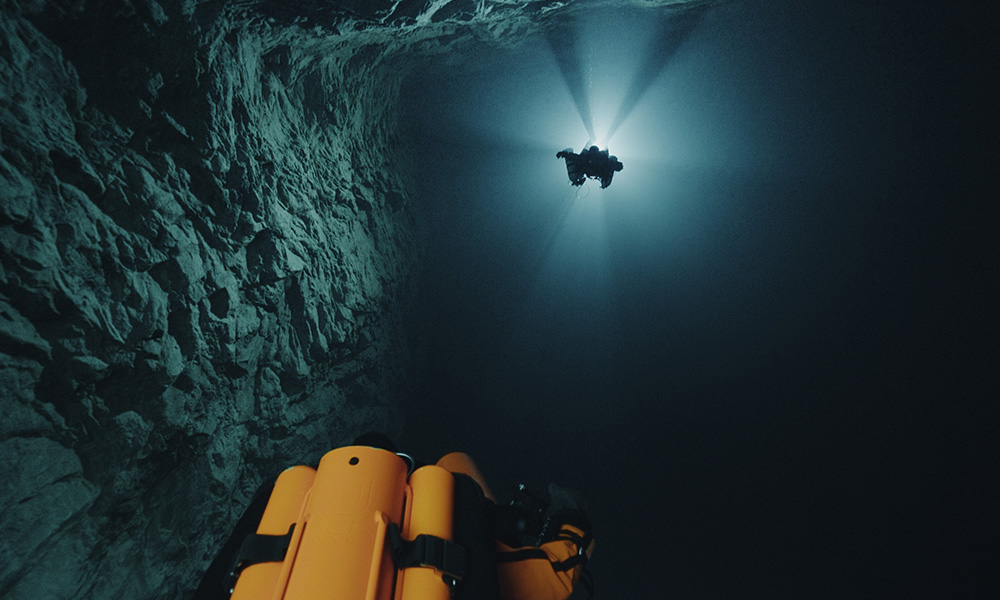 Enduring four to five hour long dives in 2° C water was a challenge for the dive team.  Add to that the need for a large amount of equipment, self dug entrance holes in the ice, and the requirement to film at night to ensure the popular dive spot was empty.

“Imagine this: rebreathers, scooters, overhead environments, large decompression obligations with a reverse thermocline at the surface as we hit the lake to decompress once we were out of the mine – and all at night time,” Gemma says.

After the dive team’s first dive in Ojamo, a short two hour jaunt, they returned to the surface only to discover that the exit hole had frozen over.  The surface team quickly broke the ice to set the divers free.  After that, strict surface protocols were followed to continually break the ice and prevent the exit from freezing over again.

“With water temperatures hitting 0° C diving conditions were tough,” Andy says. "Mix in dives to almost 100 m with kilometres of underground scootering carrying torches and cameras and you begin to realise this was a team effort where every individual is top of their game. It’s an environment most people would never choose to go, let alone make a film in. But the people made it possible.”

In order to dive the Ojamo mines, or any overhead dive environment, special training and equipment are required.  The tunnels are perfect for cave and mine divers to explore. They are horizontal, and in layers with constant depths.  The longest straight stretch is 1.7 km.  Ojamo has become one of the most popular dive sites not only in Finland, but all of Scandinavia.

Suunto dive engineers regularly dive in the mine. The team of dedicated divers have amassed thousands of hours inside the tunnels while testing Suunto technology. This is an important part of the development process, and to constantly improve to ensure all Suunto devices meet strict performance targets.

It wasn’t always a labyrinthine diving paradise.  Back in the 18th century it was limestone mine, and was then converted into a prison camp during the Second World War, when Finland was fighting the Soviet Union. The prisoners worked around the clock in hellish conditions until the end of the war.

Mining operations recommenced after the cessation of hostilities, but not for long, however.  The value of limestone plummeted in the 1960s; the mine was abandoned, leaving it to slowly fill with water and ultimately preserving its magic and history.

Diving inside the eerie tunnels through the crystal clear water you can see what was left behind, including extensive tunnel systems, miners tools scattered on the floor, lightbulbs that look ready to switch on, even boxes of dynamite lay frozen in time in the cold water.

Divers have spent many years exploring and mapping the system, keen to discover unexplored routes.  Why not explore this underwater adventure park yourself?

Learn more about the film here:

Lead image: Photo by Divers of the Dark