The words 'crushed' and 'crashed' may only have a single letter of difference between them, but they have an entirely different meaning. For Greg Hill, 'crushed' is how his body is feeling now that he's over half way to his March Madness goal of 100,000 vertical meters. 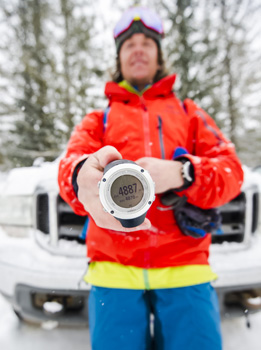 'Crashed' is what he did to his snowmobile en route to a backcountry tour last week. Before you worry, the snowmobile prang was a just a small setback on the route to that day's 3,500m of climbing, in which Hill and a few friends toured the Gold Range of Revelstoke, not far from Hill's Canadian home. And while 3,500m of ski touring may seem like a pretty full day to the average backcountry explorer, to Hill, it's just another day in March. Starting March 1st with the highly ambitious goal of a 100k month, Hill has been racking up ascents with the tenacity of a man possessed.

Along the way, there have been wicked ski lines – and a few wickedly close calls, such as when Hill set off an avalanche that actually ended up sliding over the same area he'd just skinned up. In hindsight, Hill analyzes the situation and the decision. “I think that part of my goal was clouding my judgement, wanting to set a track that was quicker for me to get vertical, versus harder and more tiring but safely in the rocks,” says Hill. “It was  a huge avalanche that swept down 300+ meters. The mountains gave me a stern warning that I should not be too confident out here and be wary. Especially as I push towards my goal,” he tells us.

Currently, Hill has accumulated over 60k of his 100k goal, with multiple days of 4,000m+ of vertical, in everything from sunny conditions with fresh powder, to pure, near white-out storm skiing – and while not every day has allowed him to bag a summit, he's scored a few.

Overall, the cumulative effort of such an endeavor is starting to catch up with him. “I wondered at what point of this mission that I would wake up completely crushed. Sore, tired and not wanting to get out of bed. Walking down the stairs to let the cat out was painful. I am intimidated by stairs today!”

Nevertheless, the crazy Canadian's March Madness is set to continue. After taking the 20th of March to rest, he's already back on the skin trail, going, up, up, up – all the way to 100,000m.

Follow Greg Hill's March Madness on his blog or check out some of his incredible moves on Movescount.