Suunto ambassador Ueli Steck is soon heading to the Himalaya to climb Nuptse, a 7861 m monster in Nepal only 2 km from Everest. Follow our four-part series about Ueli and climbing partner Colin Haley’s journey as they acclimatize and make their one time push to the top.

After climbing 117, 000 vertical meters in the Alps this summer for his #82Summits project, Swiss alpinist Ueli Steck is “super motivated” to take on a grande mountain.

In one week the Swiss Machine – famous for his lightning fast solo ascents – is travelling to Nepal to begin acclimatizing for an alpine-style attempt on Nuptse, via its formidable south face. 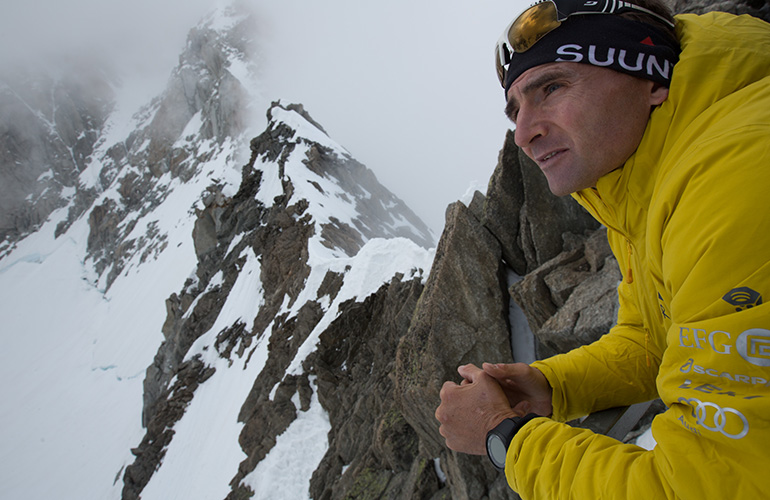 In 2003, Russian climbers Valeri Babanov and climbing partner Yuri Koshelenko made the first successful ascent of Nuptse via its south-face, using fixed ropes. For this they won the prestigious Piolets d'Or award. However, it came hard won – for Valeri the successful ascent followed three consecutive failed attempts in two years.

Since Valeri’s ascent in 2003, no one has again summited Nuptse via the south-face.

“It’s never been repeated because it’s a really hard route,” Ueli says. “It’s a really technical route. That’s why I want to go there –it’s another step for me in developing technical, high altitude climbing.”

Ueli believes Nuptse will be more difficult than his famous 2013 solo ascent of Annapurna, one of the most dangerous mountains in the world. That climb won Ueli the Piolets d'Or award in 2014.

“I think it’s definitely harder than Annapurna south face, technical wise,” he says. “The route I did on Annapurna looks insane, but technically it wasn’t hard.”

Ueli is also motivated by the fact that no one has done a successful high altitude, technical climb in the Himalaya in the alpine-style.

“The true alpine style means you don’t leave fixed ropes, you carry everything on one single ascent,” Ueli explains. “It’s a single push climb – you cannot go up part of the way, come down again and then go back up.”

“It’s going to be interesting to repeat that route in more of an alpine style,” Ueli says. “Sometimes it’s really cool to realise what other people have climbed.

“The fact that someone did it before, means I have much more knowledge, which means I can climb harder because of that knowledge.

“I know Valeri very well and for me it’s an honour to repeat one of his routes.”

Ueli and Colin will spend about two weeks acclimatizing to the higher altitude on the north face of 6440 m Cholatse. Ueli expects the ascent and descent of Nuptse to take between four and five days.

Stay tuned for the second instalment in our four part series. Part 2: acclimatizing.