Suunto's decompression model development originates from the 1980s when Suunto implemented Bühlmann's model based on M-values in Suunto SME. Since then research and development has been ongoing with the help of both external and internal experts.

In the late 1990s, Suunto implemented Dr. Bruce Wienke's RGBM (Reduced Gradient Bubble Model) to work with the earlier M-value based model. The first commercial products with the feature were the iconic Suunto Vyper and Suunto Stinger. With these products the improvement of diver safety was significant as they addressed a number of diving circumstances outside the range of dissolved-gas-only models by:

All decompression models are theoretical and have their benefits and limitations. When you choose the appropriate decompression algorithm and personal setting or gradient factors for your dive, always take your personal factors, the planned dive, and your dive training into consideration.

Although it is possible, changing the algorithm between dives is not recommended when no-fly time calculation is active.

Make sure your Suunto dive computer always has the latest software with updates and improvements. Check before every dive trip from www.suunto.com/support, if Suunto has released a new software update for your device. When a new software update is available, you must install it before diving. Updates are made available to improve your user experience and are part of Suunto's philosophy of continuous product development and improvement.

The Suunto Fused™ RGBM 2 combines and improves widely respected Suunto RGBM and Suunto Fused™ RGBM decompression models developed by Suunto together with Dr. Bruce Wienke. (Suunto dive algorithms are a culmination of expertise and knowledge accumulated over decades of development, testing and thousands upon thousands of dives.)

In Suunto Fused™ RGBM 2 the tissue half-times are derived from Wienke’s Full RGBM where human body is modeled by fifteen different tissue groups. Full RGBM can utilize these additional tissues and model the on-gassing and off-gassing more accurately. The amounts of nitrogen and helium on-gassing and off-gassing in the tissues are calculated independently from each other.

Suunto Fused™ RGBM 2 algorithm supports open-circuit and closed-circuit diving up to a depth of 150 meters. Compared to previous algorithms, Suunto Fused™ RGBM 2 is less conservative on deep air dives, allowing shorter ascent times during decompression dives. In addition, the algorithm no longer requires tissues to be completely free of residual gases when calculating no-fly times, thereby reducing the required time between your last dive and flying.

The advantage of Suunto Fused™ RGBM 2 is additional safety through its ability to adapt to a wide variety of situations. For recreational divers it may offer slightly longer no- deco times, depending on the chosen personal setting. For open-circuit technical divers it allows use of gas mixes with helium - on deeper and longer dives helium based gas mixes provide shorter ascent times. And finally, for rebreather divers the Suunto Fused™ RGBM 2 algorithm gives the perfect tool to be used as a non-monitoring, set point dive computer.

The Bühlmann decompression algorithm was developed by Swiss physician Dr. Albert A. Bühlmann, who researched into decompression theory starting from 1959. The Bühlmann decompression algorithm is a theoretical mathematical model describing the way in which inert gases enter and leave the human body as the ambient pressure changes. Several versions of the Bühlmann algorithm have been developed over the years and adopted by many dive computer manufacturers. Suunto’s Bühlmann 16 GF dive algorithm is based on the model ZHL-16C. This model has 16 different theoretical tissue groups with half times from 4 minutes up to 635 minutes.

Gradient factors are always defined as percentages. The Low % value determines the first deepstop, while the High % value defines the allowed M-value once surfacing. Using this method, the GF changes throughout the ascent.

A commonly used combination is GF Low 30% and GF High 70%. (Also written as GF 30/70.) This setting means that the first stop would take place once the leading tissue reaches 30% of its M-value. The lower the first number is, the less supersaturation is allowed. As a result, the first stop is required when you are deeper. In the following illustration, GF Low is set to 30% and the leading tissue compartments react to the 30% limit of M-value. At this depth the first decompression stop takes place. 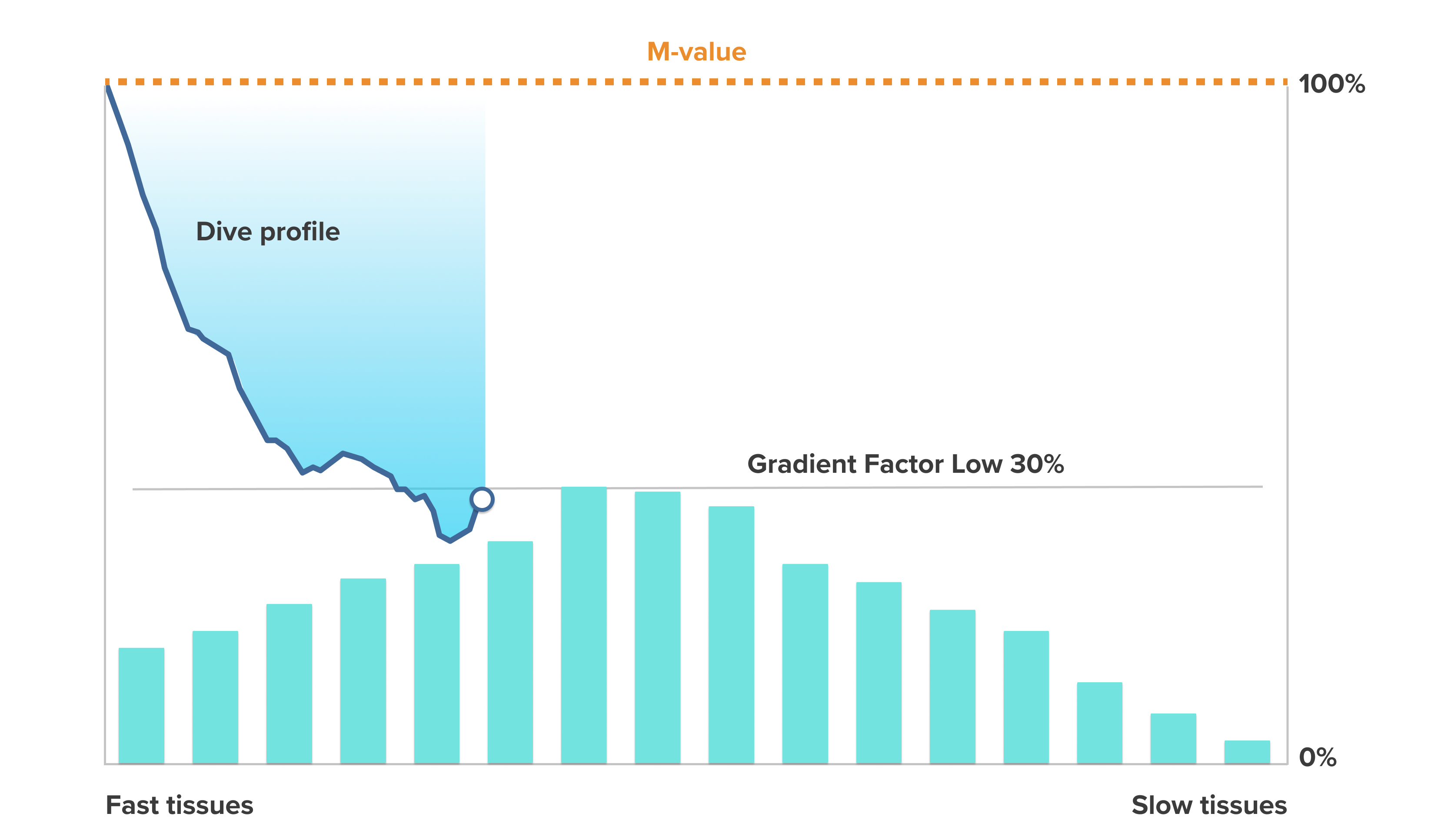 When the ascent continues, the GF moves from 30% to 70%. GF 70 indicates the amount of supersaturation allowed when you get to the surface. The lower the GF High value is, the longer shallow stop is needed in order to off-gas before surfacing. In the following illustration, GF High is set to 70% and the leading tissue compartments react to the 70% limit of M-value. At this point you can come back to the surface and finish your dive. 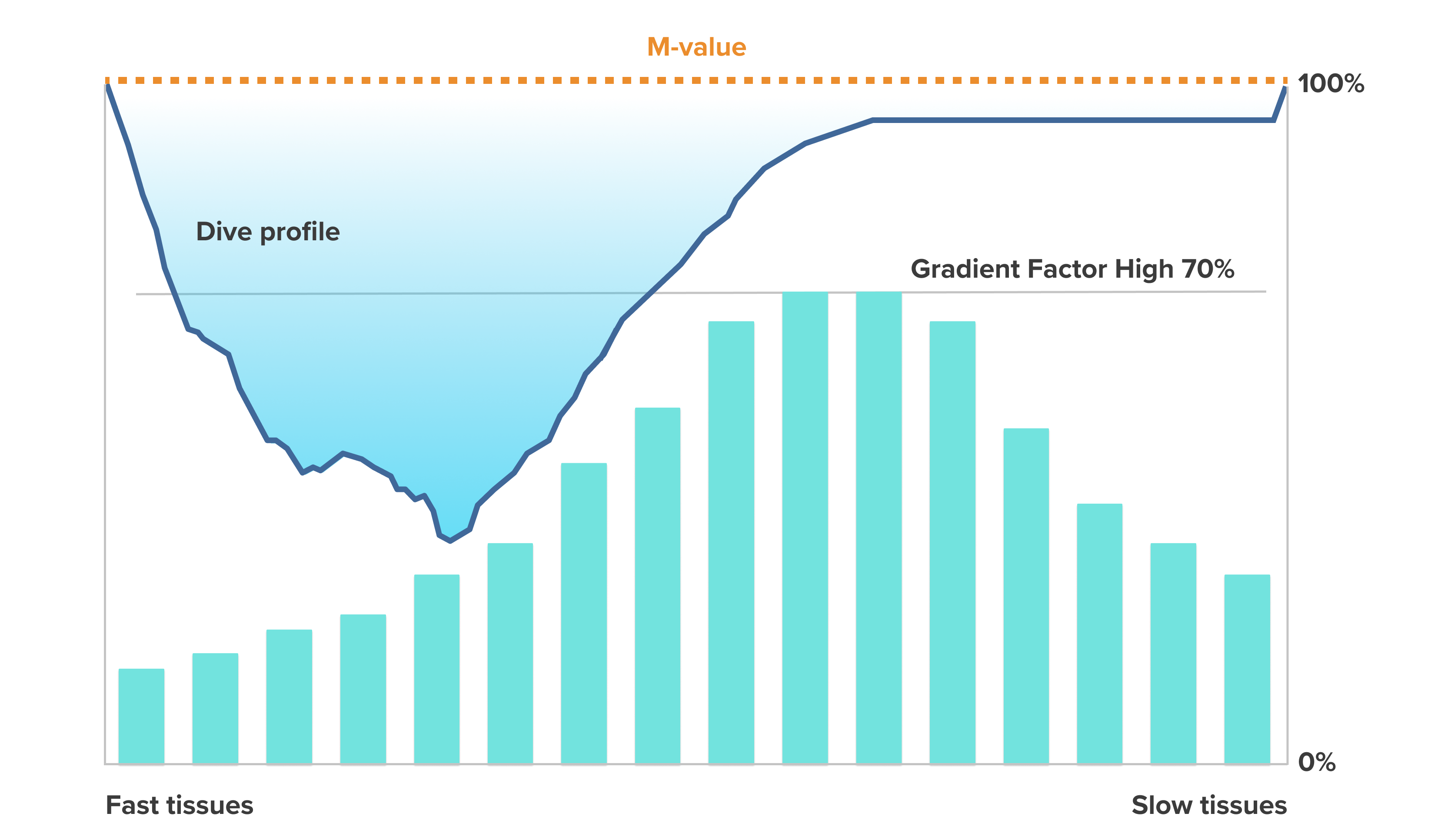 The default setting of Suunto's Bühlmann 16 GF dive algorithm is 30/70. All values other than the default values are out of recommendation. If you modify the default values, the value number turns red and a warning appears on the screen.

The effects of gradient factors on the dive profile

If GF Low % value is too low, some tissues may still on-gas when the first stop occurs.

If you want to see the comparison of the Suunto Fused™ RGBM 2 algorithm and the Bühlmann 16 GF algorithm, go to suunto.com/support.

The oxygen exposure calculations are based on currently accepted exposure time limit tables and principles. In addition to this, the dive computer uses several methods to conservatively estimate the oxygen exposure. For example:

Oxygen related information displayed by the dive computer is also designed to ensure that all warnings and displays occur at the appropriate phases of a dive. For example, the following information is provided before and during a dive when the computer is set to Air/Nitrox or Trimix (if helium is activated in use):

WHEN THE OXYGEN LIMIT FRACTION INDICATES THAT THE MAXIMUM LIMIT IS REACHED, YOU MUST IMMEDIATELY TAKE ACTION TO REDUCE OXYGEN EXPOSURE. Failure to take action to reduce oxygen exposure after a CNS%/OTU warning is given can rapidly increase the risk of oxygen toxicity, injury, or death.